Despite debt from previous events, WoodyFest continues to sing 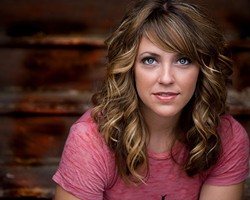 Woody Guthrie made a career out of singing on the errors of capitalism. Unfortunately, the festival that bears his name can’t set up for free; it needs funding in order to continue Guthrie’s legacy.

Additional efforts include the Women of WoodyFest concert series that began in 2015. The first one this year was March 11 at Tulsa’s Woody Guthrie Center, and the second is 8 p.m. Saturday in Oklahoma City at The Blue Door, 2805 N. McKinley Ave. Tickets are $20. K.C. Clifford, Melissa Hembree, Susan Herndon, Lauren Lee, Shawna Russell and Monica Taylor will perform.

The event's fundraising committee also launched a GoFundMe account Jan. 4. The goal is set at $60,000 and, at press time, donations have reached $8,221.

As Oklahoma Gazette reported Feb. 17, WoodyFest was $20,000 in debt going into its upcoming 20th anniversary. At press time, the debt has reduced by $3000, said special projects coordinator Karen Zundel. While some of the debt is attributed to decreased sponsorship funding, Mother Nature also played a hand.

“The weather last year was an impact on the festival,” said Zundel, former festival media chairwoman. “There was some violent weather that caused the Thursday night Turnpike Troubadours show to be moved indoors. We were hoping that was going to draw a large group because of the outdoor pasture (stage). But the weather had a negative impact, so not as many people attended.”

“We reimburse the artists for travel,” Zundel said. “Because of airfare, especially, it’s just really increased the last several years. ... Sometimes it’s just impossible to work within that budget.”

“[New Dominion] was a huge supporter,” said treasurer and past president and John Robertson. “As the oil industry took their huge hits, they understandably backed out.”

While a large amount of attention is spent on fundraising, events and activities are still planned for the July 12-16 event in Okemah. Daytime events feature live music, lectures, poetry readings and children’s activities. Nighttime events are held on the Pastures of Plenty stage a short distance outside Okemah.