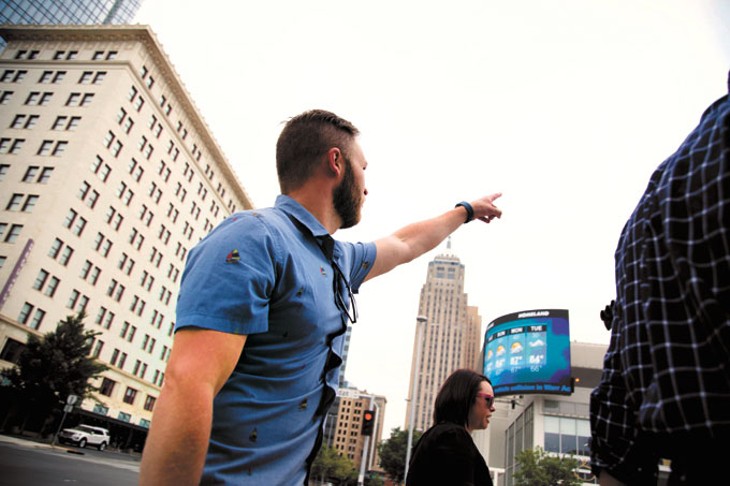 Some people think that Oklahomans only drive on dirt roads, cattle graze around the Will Rogers World Airport runways and our entire state is farmland.

Those who have yet to visit Oklahoma City are in for a modern awakening.

A branch of event management company factor 110, Destination Oklahoma has launched an array of daily walking tours celebrating downtown OKC’s rich history and exciting present. Folks should wear comfy shoes and prepare to be surprised by our dynamic city center.

“Our tours are for both tourists and Oklahoma natives,” Destination Oklahoma manager Tyler Woods told Oklahoma Gazette. “Walking tours educate and entertain at the same time, and they’re a staple in any major city. Oklahoma City deserves to be on the map.”

Inspired by his frequent travels, factor 110 president Brian Ferrell launched the recent expansion of Destination Oklahoma to instill a sense of pride in Oklahoma residents while helping visitors discover the city’s historical sites and stories.

Museums, parks, buildings and venues only hit the tip of the city’s vast iceberg.

“History plays an integral role in each tour,” Woods said. “Because so many original buildings and areas were torn down in the late 20th century, many people don’t have a sense for OKC’s rich but complicated past.”

Destination Oklahoma employs the city’s current architecture to point to its history. The city’s modern landmarks hold more history than meets the eye, proving that the state’s past encompasses much more than traditional education courses.

“We love revealing unknown history facts,” said Woods. “A lot of people don’t know, for example, that below the Cox Convention Center, there was a three-story underground full of saloons and brothels or that the area surrounding the Oklahoma City Museum of Art was the first red light district in the city.”

These tidbits of information make up downtown OKC’s prevailing legacy as a destination for contemporary cultural aficionados and history buffs alike. Like any proper Southern town, OKC also has its fair share of ghost stories.

“Bricktown used to have a large cemetery and was moved to a different location when the area underwent renovations in the 1960s and ’70s,” Woods said. “However, we’re not sure if all of the bodies were successfully relocated. Since I write the scripts for each tour, detailed research goes into what people and sites are covered.”

Tourists and residents might see the city a little differently after learning about these predominant historical figures and their seedy whereabouts in the city.

OKC’s contemporary features will undoubtedly change outside perspectives. For example, visitors will learn that OKC has one of few contemporary music academies in the world, The Academy of Contemporary Music at the University of Central Oklahoma (ACM@UCO), in Bricktown. Woods said present day-focused tours are perfect for architecture enthusiasts.

“We start from 1970s urban renewal efforts and highlight this progress into each of the MAPS projects and end with the ongoing Project 180 efforts downtown,” he said. “Anyone interested in historical building restoration will learn a lot about how OKC achieved its modern look today.”

“I could go on all day about OKC’s present achievements,” he said. “People are always fascinated by what’s currently happening in OKC and that we stack up to some of the U.S.’s major cities.”

Curious walkers can choose from five different tours on Destination Oklahoma’s current roster. A Moment in Time guides guests around The Oklahoma City National Memorial & Museum, with a night tour option for those who would like to experience the memorial’s serene lighting after dusk. Guests engage in both self-guided and structured tours during this program while receiving rare access to the museum’s archives.

“Destination Oklahoma is very fortunate to give guests access to the museum’s archives, which are not open to the general public,” said Woods. “The archives contain information about the [Alfred P.] Murrah [Federal] Building bombing, the trial and the plans behind the memorial itself. It’s a truly unique and educational experience.”

Hit the Bricks and Hit the Bricks at the Holidays start at Myriad Botanical Gardens, cover all of Bricktown and major corporations like Devon Energy and Chesapeake Energy and end at the downtown Oklahoma Land Run Monument. Those seeking a more festive atmosphere will enjoy the holiday option.

All current tours are family-friendly, although some might have a PG-13 edge.

“We try to keep them accessible to any age group,” he said. “Retired individuals or those with free time during the day would benefit from our day tours, while college students might enjoy our late-night tours. There’s a tour for everyone.”

Along with sister company Scissortail Gifts, Destination Oklahoma is set to move into the historic Santa Fe Depot before the year ends.

“Our new location opens a world of possibility for future tours,” said Woods. “Above anything, we want tourists to learn about and enjoy OKC, and we want residents to be inspired by the city in which they reside.”