Jazz singer and pianist Diana Krall will perform Nov. 15 at Civic Center Music Hall, 201 N. Walker Ave., in support of her latest album, Wallflower, which covers classic pop songs from the ’60s to the present. 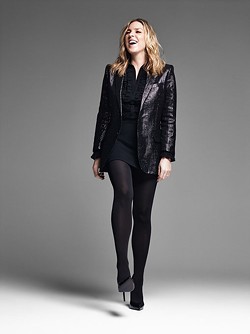 Jazz singer and pianist Diana Krall will perform Nov. 15 at Civic Center Music Hall, 201 N. Walker Ave., in support of her latest album, Wallflower, which covers classic pop songs from the ’60s to the present.

Krall revived jazz as a commercial art form in 1998 with her breakthrough album When I Look in Your Eyes, which was the first jazz album to be nominated for the Album of the Year award in 25 years at the Grammys. Billboard ranked the album ninth on its list of Top Jazz Albums of the Decade.

Krall was born in 1964 in British Columbia, where she began taking piano lessons at the age of 4. Her father was a stride pianist who had an extensive collection of jazz records, and Krall acknowledges the inspiration she took from legendary pianists Fats Waller, Nat King Cole and Oscar Peterson.

Though she seemed like an overnight sensation, Krall released four albums leading up to her success with When I Look in Your Eyes. With her follow-up release, 2001’s The Look of Love, her record company changed her image from a jazz performer to a pop chanteuse, and the record company played up her photogenic looks, giving her a sultry, sexy mystique to go with her husky contralto voice. Krall is said to be uncomfortable with the glamour photo shoots, and though the formula has been widely successful for her over the years, her real fans agree that her best asset is her voice.

In 2009, she did an extensive interview with Sir Elton John on Spectacle — the Showtime series hosted by Krall’s husband, Elvis Costello — where she reclaimed her jazz roots by beautifully performing works by Peterson and Cole off the top of her head.

While Krall’s last album, 2012’s Glad Rag Doll, paid homage to obscure, pre-WWII jazz, pop and vaudeville songs she learned from her father’s record collection, Wallflower seems to continue that exploration into her influences and past but updates it to the music from Krall’s formative years.

Wallflower mostly consists of covers of soft pop hits from the ’60s, beginning with The Mamas & the Papas’ “California Dreaming” up through Randy Newman’s 1995 composition “Feels Like Home.” Krall takes these songs, many of which have been marginalized by critics over the years as “mere” pop music, a genre seen as “lower” than rock music to some, and performs them as post-modern standards. Because of the pervasiveness of The Carpenters’ “Superstar” or the Eagles’ “Desperado,” they are as familiar to our age as the Great American Songbook was to earlier generations.

Krall also throws in some oddball choices amid the Jim Croce and Gilbert O’Sullivan songs on Wallflower that show this is more than simple nostalgia. Among them is an unrecorded Paul McCartney song left over from his 2012 album Kisses on the Bottom, which Krall also worked on, and the title track, a 1971 song written by Bob Dylan that wasn’t released until 20 years later.

The Wallflower World Tour is a unique opportunity to see a major artist revisit the music that inspired her to become the artist she is today.