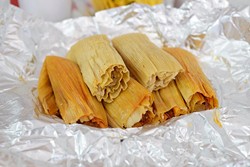 There was no fork in the car and there were few napkins, but it didn’t matter. This meal was worth the mess.

Inside the white plastic bag, the kind one might get checking out at a grocery or convenience store, was a mass of crinkled aluminum foil with three stickers on top that read “pork,” “chicken” and “cheese.” The aroma wafting out of the bag was delightful.

Pulling away from Tamales El Patio, 3421 SW 29th St., the urge to open the foil wrapper was nearly unbearable.

Though tamales are an extremely portable food, they’re not extremely easy to eat while mobile.

But driving down the road with the scent of steamed corn masa permeating the car made that tiny dining room seem like an oasis.

Pulled over in a parking lot, it took no time to tear into the package and snatch up an assortment of tamales, each individually wrapped in cornhusks.

Extricating them from the husk was a bit more labor-intensive but a much tastier task as hot strips of the cooked corn masa came away with each layer.

Tamales El Patio sells its signature dish by the half dozen for $8 or a dozen for $15. Diners can choose from any of the three flavors in whatever combination they like.

My favorite is the red pork, the most distinctive and flavorful of the lot. It is stained deep red with chilies, but it’s not so spicy that John Q. Okie can’t handle the heat. In fact, these tamales taste best doused in hot sauce or maybe a fresh salsa verde.

The cooked corn mix achieves an almost gelatinous texture but easily breaks under the weight of a fork or teeth. The flavor is mildly sweet until the core filling is bitten into.

Second to red pork are the cheese and jalapeño tamales. Don’t expect cheddar or even American cheese flavors here. The cheese is not runny or melting but remains fairly firm with a subtle taste.

This is more a base for jalapeños, though the cheese helps counteract any sustained heat from the peppers.

Diners discover a light burst of spice and the green, grassy flavor of jalapeño flesh.

Even milder than the cheese are the chicken and jalapeño tamales. These are a good option for those who really want to taste the corn or are just not interested in the spicier pork or cheese varieties. These also work well with hot sauce or salsa to amp up the flavor.

Unwrapping tamales is a fun job, but be mindful of the trapped steam inside the husks.

Without forks, eating became a messy affair, but a joyful one.

Even with hands slicked up by the moisture of the masa, this was an enjoyable, interactive meal.

Man probably can and should live by tamales alone, but for a change of pace, try an elote ($2 for a small, $3 for a medium, $4 for a large).

Sometimes served on the cob, elote is a Mexican street food favorite mixing corn with sauce, cheese and spices. At Tamales El Patio, it comes as a cup of corn kernels, mayonnaise, Parmesan cheese, lime, chili pepper and other spices.

Elote is an acquired taste, but it doesn’t require much exposure to get acclimated. While it would be nice if Tamales El Patio’s corn showed signs of roasting, it still has a wealth of flavor and an intriguing texture — a little chewy, a little smooth, a little crumbly — that will win some converts.

The nachos ($3) listed on the website did not appear as advertised. Instead of chili con carne, these were standard-issue stadium nachos with tire-tread tortilla chips, ladles of warm nacho cheese sauce and a healthy smattering of pickled jalapeños on top.

It wasn’t what was expected, but it’d be a lie to say they weren’t satisfying in a nostalgic kind of way.

By contrast, the diablitos ($3) were a completely new experience and one worth going back for.

Diablitos are Mexican-style sno-cones with chunks of real fruit and the spicy addition of chili powder on top. Customer after customer came in for tamales and these spicy beverages during my short visit to the restaurant. 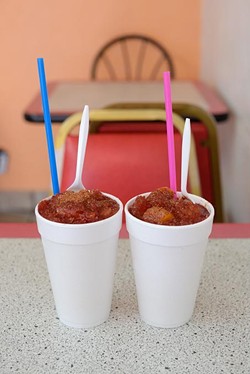 Tamales El Patio is a gem of the south side, and the red pork tamales are reason enough for anybody to make the journey to SW 29th Street.

Grab a dozen or two for a party and watch the delight on guests’ faces as they unfold the husk and peel away succulent bites of steamed masa and tasty fillings.

But do everyone a favor and set out forks ahead of time.

What works: Tamales, elote and diablitos are unique and delicious. What needs work: The nachos need an upgrade. Tip: This old-school business is cash-only, so plan to stop at an ATM first.