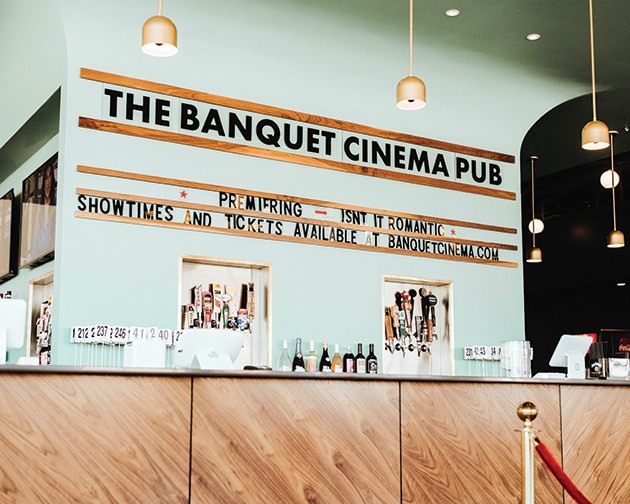 Banquet Cinema Pub, 800 NW Fourth St., is the brainchild of The Bleu Garten founders Hunter Wheat and Lacey Pritchard, who turned a 12,750 square-foot retro 1930s building that featured a showroom for Chryslers into a large, full-service pub and kitchen with two 75-person capacity theaters.

“We want it to be like you go to a pub and a cinema broke out,” Wheat said, noting that the biggest confusion since the pub opened in mid February is that customers need a movie ticket to eat and drink in the large pub space.

Wheat admitted that the concept of a cinema pub has been on his mind since before he opened The Blue Garten in Midtown in 2014, but they could never find the right location to fit everything they wanted in the space. After opening Anatomy Wine Club in the Plaza District two years ago, he was traveling south and noticed the current space, which had recently gotten its large exterior windows redone.

“It was just kind of perfect,” Wheat said. “We loved the industrial look and feel to it. We kept the original 1930s flooring. I loved the space as soon as we walked into it.”

The wall behind what is now the kitchen was already semi-soundproof because it housed a mechanic shop for the automobile showroom, which made it a perfect place to install a pair of theater screens. 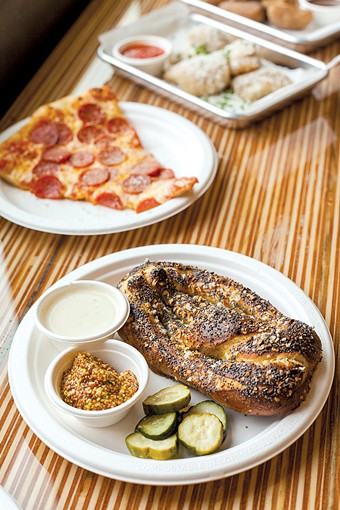 The kitchen and its menu devised by Jeff Patton — formerly of Mary Eddy’s Kitchen x Lounge — is built around a large deck oven that features pizza with sauces drizzled on top, nachos, a pretzel with onions and poppy seeds, chicken wings and salads.

“I wanted to do pizza because we wanted to keep it to food that you can eat with your hands so that we’re not having to bring silverware back into and out of the cinemas,” Wheat said.

There are the requisite cheese, pepperoni and sausage pizzas in addition to more adventurous pies like Pineapple Express with barbecue sauce, pineapple, jalapeños and bacon and the Chick N Chong with chicken, bacon, ranch, caramelized onion and Buffalo sauce. There are a pair of white pizzas: Field of Dreams with Yukon potatoes, roasted mushrooms, pickled beets and a kale-pistachio pesto and True Grit with Taleggio cheese, speck ham and Neon Sunshine beer jelly. All are sold by the slice ($3-$5) or as huge, 20-inch pies ($24-$40).

Since opening, it has added a vegan pizza with cremini mushrooms and garlic chives.

“Our [original] crust isn’t vegan, so we had to make a new crust,” Wheat said. “We didn’t start with one because we didn’t know what the demand would be, but the day we announced it on social media, people arrived and it sold out real fast.”

“The Motor City pie is my favorite thing on the menu,” Wheat said. “That was a big debate before we opened; we almost did nothing but Detroit-style, and we might do more and more as we get going. It’s my favorite because you get that caramelized crust.”

Wheat said the menu will continue to evolve, and they hope to open for lunch during the week. He envisions taking advantage of the deck oven with sandwiches like a Cuban sandwich cooked under a brick like the Jon Favreau movie Chef.

Drinks and food can be brought to the customer’s seat in the movie theater, and guests can order from a separate bar once the movie starts. Comfortable chairs imported from an old movie theater in Arkansas are seated in front of a counter for food and drink.

Banquet Cinema Pub shows a mixture of first-run, recent and classic films. Its opening was built around the major studio release Isn’t It Romantic starring Rebel Wilson and Liam Hemsworth. The studio required a dedicated theater to show the film at release, and it is indicative of the complicated process to secure first-run releases.

“It’s a different negotiation with every movie and studio,” Wheat said. “The movie Greta is from Universal [Studios], and they don’t even know the terms until they see how it does opening weekend, so it is a backwards negotiation.”

Wheat said Banquet will show director Jordan Peele’s Us for its premiere March 22 in addition to his first film, Get Out, during March. Banquet built its first few weeks around romantic movies like When Harry Met Sally, Moonstruck and Annie Hall in honor of Valentine’s Day. Wheat said March features Irish movies for St. Patrick’s Day.

“When you get to April, you have to play stoner movies, right?” he said. “We’ll mix and match.”

Movie tickets are $10 regularly and $6 for 5 p.m. screenings. Wheat wants to host more events like a successful Oscars watch party for which guests showed up in tuxedos and gowns. He wants to do watch parties for big Thunder games and host politicians like councilman-elect James Cooper, who will host a Q&A in conjunction with the biopic Milk about Harvey Milk, the openly gay member of the San Francisco board of supervisors.

Wheat said that when talking to film buyers, it can be difficult to get independent films at movie chains to Oklahoma because they typically don’t sell well.

“If we can sell a lot of tickets, we can get movies that don’t normally release here,” he said. “Our goal isn’t to try and compete with AMC or any of the other cinemas; we’re trying to be our own thing.”