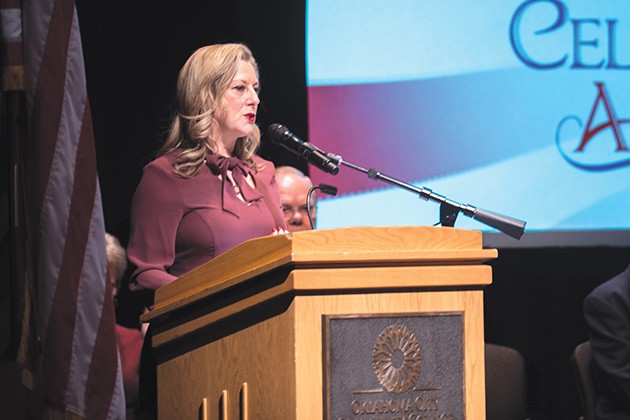 While in her district, Horn took the opportunity to speak about one of her latest legislative efforts, the Capping Drug Costs for Seniors Act.

“One of the things that I hear about the most is the high cost of health care and the need to address that. I authored a bill with one of my colleagues to cap the out-of-pocket costs for Medicare Part D patients for prescription drug prices at $2,000,” she said. “Right now, [the cap is] $5,100, so it would save our seniors under Medicare Part D $3,100 out-of-pocket. This is important because it would have an effect on people’s lives on a day-to-day basis. It’s only part of the solution. It doesn’t do everything, but it does help people. We’re continuing to work on some other legislation for prescription drug pricing and working on increasing access to mental health [care].”

She said it’s going to take addressing health care through various avenues to provide people with the care they deserve. One of those ways could be through Medicaid expansion, which Horn has been a staunch supporter of and could be headed to the November 2020 ballot after a successful ballot initiative campaign.

“It is one of the most important things we can do to expand access to quality, affordable health care for Oklahomans because far too many working Oklahomans are falling through the cracks, and Medicaid expansion would address that,” she said. “Our refusal to accept [federal funds], which are our taxpayer dollars, … has resulted in the closure of at least six rural hospitals, and other facilities are on the brink. This is good governance. It is responsible policy, and those are the kinds of things that I’m working on on a day-to-day basis. Those are the things we should be talking about.”

While in the district, Horn was also the guest speaker at a naturalization ceremony Nov. 8 during which a number of people became U.S. citizens.

“E pluribus unum: out of many, one,” she said during her speech. “That is the foundation of our country, your chosen home that you have worked hard to become a citizen of, that you have studied, that you have sacrificed for, that you value so deeply the thing that many of us who were born into this place, I think, far too often take for granted. … So as a congressperson who represents many of you if you live in the 5th Congressional District, I want to encourage you to speak up, to reach out to me, to reach out to my office. If I don’t represent you, to reach out to your elected officials, to follow what’s happening, to understand why our systems are important and understand your role and responsibility and to vote in city elections, in state elections, in federal elections.”

At the same time Horn was addressing new citizens, high school and college students nationwide — including students at University of Oklahoma and three Oklahoma City Public Schools — walked out in support of Deferred Action for Childhood Arrivals (DACA). Horn told Oklahoma Gazette immediately after the ceremony that she will continue to advocate for a permanent solution.

“I have always supported DACA. I had a number of DACA students that worked on my campaign. I think that for young people, this is their home,” she said. “This is the only home they know, and they’re building lives here. They’re business owners and teachers and contributing members of our communities. We made a promise to them, and we have to uphold it. That’s why I voted for the DREAM Act, and that’s why I’ll continue to advocate for a permanent solution to DACA until it happens.”

Impeachment hearings began last week, but Horn wants to get all the information before making any decision.

“Open hearings give the public a transparent window into the House’s investigations. As the inquiry continues, I am reserving judgment until I have all the facts,” she said in a statement. “Every decision I make in Congress is about doing what’s right for Oklahoma, and in this case, that means listening to my constituents at town halls, reviewing the investigation’s findings and fighting for a process that values transparency, fairness and deliberation.”

When she voted on a resolution setting the procedure for the impeachment inquiry, some believed she had voted to impeach president Donald Trump, which was not the case.

“It’s not just here; it’s all over that there’s a lot of confusion,” she told Gazette earlier this month. “What I voted for was to formalize the process for the public phase of the investigation. It was not a vote for impeachment; it was a vote to have on paper a public process that ensured a fair and transparent process for everybody involved. That’s important because the process matters. Making sure that everybody understands it is also important because it’s easy to get misinformation about what has actually happened.”

Initially, Horn was among few Democrats who resisted the idea of an impeachment inquiry.

“I have always thought that the whistleblower complaint was serious and should be investigated. However, I thought the investigation could have taken place outside of an impeachment inquiry,” she said. “Nonetheless, that was what was declared. … On the other side of that, any investigation needs to have a thoughtful and thorough and fair process, and that has been the case. The resolution that talked about the transition from closed-door investigation to public hearings set that out very clearly.”

The resolution passed with no Republican voting in favor and only two Democrats voting against. The eight-page resolution aims to ensure transparency, enable effective public hearings and provide the president opportunities to participate.

Horn’s seat has been a top target by the National Republican Congressional Committee since she defeated Republican incumbent Steve Russell. According to the Federal Election Commission, eight Republicans have already filed as candidates to challenge Horn. The primary will happen June 30 and the general election Nov. 3.