[youtube http://www.youtube.com/watch?v=iKO1mTeRHwA] Superintendent Rob Neu has brought big ideas and high standards to the Oklahoma City Public School District. But he has said since the beginning of his tenure that the transformation of the state’s largest school district will have to be a community-wide effort.

After serving in the district’s top post for 100 days, Neu and the district hosted The Great Conversation, a six-month program that will feature a series of public forums and planning sessions in an effort to clarify what the district wants to become and how it will get there.

“I want a step ladder of milestones that you as a community say we are going to hold you to,” Neu said at the beginning of the first session held Thursday. “That will be our A through F report card.”

Mutiu Fagbayi, president of Performance Fact, Inc., facilitated the forum as community members expressed their desires for the school district.

Neu has already announced ambitious plans to provide every student with an electronic device, increase teacher pay and retention, and increase academic performance. The district has already increased its number of curriculum directors and developed content strategies with principals and teachers.

But Neu said real change in the district would need to be a city-wide effort and that the district plays an important part in Oklahoma City’s ability to progress as a city.

Community input is also important because of the changing demographics of the district, school board member Gloria Torres said.

“There are some issues unique to the Hispanic community that perhaps other people aren’t aware of,” Torres said. “But [it’s also important] to be able to communicate that we have the same hopes and dreams for our children as the person next to us.” 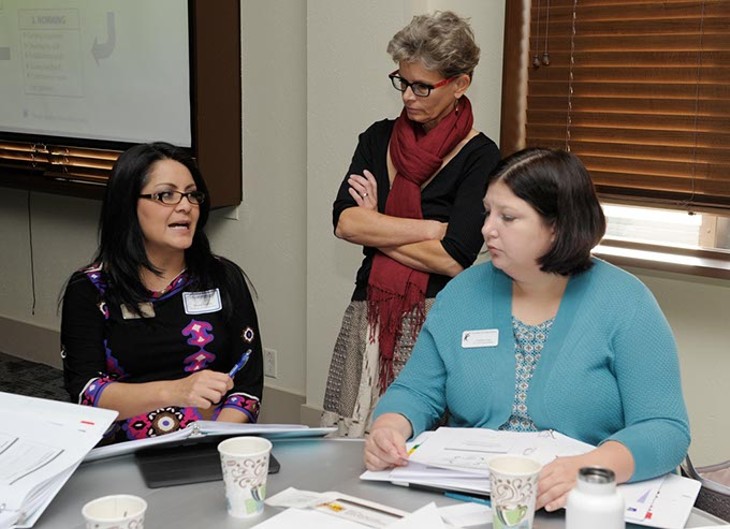 The Oklahoma City district’s student population is nearly half Hispanic and Torres said more input from Hispanic community leaders would be necessary in the months to come.

Neu has regularly challenged the business community to get more involved in the school district, including in his State of the Schools address in August.

“I ask that you change the way you think about public schools in Oklahoma City,” Neu told business leaders. “Just like you changed the way you thought about the city a few year ago.”

Jennifer Monies, who is executive director of the State Chamber of Oklahoma’s Educated Workforce Initiative, said school improvement is critical to economic success.

“Our [state] school system consistently is ranked one of the lowest states in the nation and that 100 percent has an impact on our economic development and our ability to attract and retain jobs in Oklahoma,” Monies said.

The Great Conversation continues Friday and there will be several more sessions over the next few months.