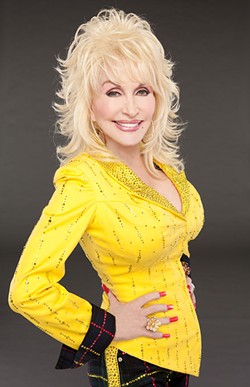 In a genre known for being white, straight and Southern, the country superstar has built an empire on her ability to bring people of all backgrounds together. Whether young or old, gay or straight, black or white, most people can’t help but love Dolly.

“I’ve often said that people don’t come to see me be me; they see me to be them. They know I’m different myself, and I fought for the right to be allowed to be myself,” Parton said during a recent round-robin phone interview with Oklahoma Gazette. “I ain’t out to preach no sermons. I’m just out to do my work, sing my songs, share them with the world and spread as much love as I can.”

That was certainly the mindset Parton had going into her newest album, Pure & Simple, out Aug. 19. After over 50 years in the industry building a career on songwriting, musical ability and down-home charm, she said she has nothing left to prove and simply does what she loves.

“The entire album is all love songs because I was married 50 years this past year to my husband, Carl Dean,” she explained. “But they’re also pure in nature and pretty simple like some of the old records I used to record that some of my true fans will really appreciate.”

To help promote her newest release, Parton is setting out on one of the biggest tours of her career with more than 60 dates across the country, including three nights in Oklahoma.

Mirroring the aesthetic of the record, she promises the Pure & Simple Tour will be a love-fest where she connects with fans, free of any pomp or circumstance.

“People have seen me do a lot of shows, but this one is the simplest one I’ve ever done,” she said. “It’s called Pure & Simple because that’s exactly what it is.”

She hits Tulsa’s BOK Center Aug. 12 and returns to the state in December for two nights at WinStar World Casino & Resort in Thackerville. Expect the usual hits (“Jolene” and “9 to 5”), some new tracks (“Outside Your Door”) and even some deeper cuts (“Smoky Mountain Memories”).

With a backing band of only three musicians, these shows are akin to a communal experience filled with music and anecdotes. Onstage, almost every aspect of Parton’s career comes together: person, performer, entrepreneur, songwriter and storyteller.

“I’m as gaudy behind the scenes as I am onstage,” she said and then unleashed her trademark, high-pitched giggle. “I just wear my heart on my sleeve, say what’s on my heart and on my mind, and people have come to know me the past 50-some years like that.”

Parton’s history, from growing up in a “Tennessee mountain home” as one of 12 siblings to her 1964 move to Nashville to pursue a music career, is well documented.

Between more than 40 studio albums, multiple film roles and other business ventures (Dollywood, anyone?), she makes success look easy. But Parton’s nothing if not a hard worker.

“I made all of my dreams come true, and now I have to be responsible for it,” she said. “You don’t get to have a dream come true and just let it go — you’ve gotta work it and decide how you can rework it and what else you can branch out into.”

She has always challenged the sort of sexist stereotyping that accompanies her dolled-up look, and songs like “Dumb Blonde” and “Backwoods Barbie” express her desire for others to look past appearance and never underestimate her abilities.

“Everyone’s got their own history and their own kind of background, but I think a lot of people relate to me because they know I came from very humble beginnings with a lot of faith, a lot of grit and a lot of guts,” she said. “I always had a great respect and understanding of men, but I also had a lot of power because of my five sisters, my mother and my grandmother.”

It’s that power — fierce energy combined with a sincere sweetness — that makes her one of the most enduring symbols of popular music. She makes fans cry as she sings a few lines from “I Will Always Love You” one minute and makes them erupt in laughter the next as she talks about the time she entered a Dolly Parton lookalike drag contest and lost.

Despite the trials Parton faced on her way to the top, she never stopped radiating joy and positivity to her fans. Once listeners look past the fame, the hits and the rhinestones, Parton is a good ol’ country gal who works hard to make people happy.

“I see so much darkness in this world,” she said. “I wanna be some sort of light and do something that can lift the spirit of somebody.”