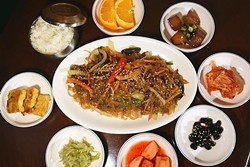 Nothing makes me think of Korea as much as the Incredible Hulk.

That might seem weird, but growing up in Oklahoma doesn’t necessarily bring Korea right to your doorstep. For years, all I knew about Korea was the wackadoo stuff coming out of the Kim Jong line of tyrannical dictators and that my sister-in-law was stationed there during her tenure in the Air Force.

Her assessment: Kimchi is a powerful odor. My brother, who went to visit her, gave me a more lasting impression: an enormous plush blanket with the Hulk on it.

All that is to say I still don’t know a ton about Korea, but that didn’t stop me from falling tongue-over-stomach in love with the food at Moore’s Dong-A Korean Restaurant, 1262 N. Eastern Ave.

There is a better than average chance that you have not had Korean food before, except maybe some kimchi, which is a spicy pickled cabbage (or other vegetable) condiment, like sauerkraut. Or maybe you have. I don’t know your life. Are you Korean? If so, that’s great. If not, also great. It doesn’t really matter when you’re eating food this good.

You can be the most backward, white-bread hick in Oklahoma (for example, me) and fall deeply in love with the richly flavored cuisine of Korea when you order bulgogie ($13.99).

Sweet, savory, seared beef and onions is about the perfect introduction to Korean food because it’s a lot like fajitas and you like fajitas, don’t you? Of course you do. You’re human. There are chicken and pork bulgogies available, but you might as well stick with the original. The thinly sliced sirloin requires very little chewing, preferring instead to disintegrate against your teeth and tongue in a burst of flavor. Put it over rice. Wrap it in a pancake. The only wrong way to eat bulgogie is to not eat bulgogie.

(Similar to the bulgogie is gal-bi, made with beef short ribs and also fantastic.)

Be sure to enjoy the banchan in little bowls that comes out with your food. There’s kimchi and some other pickled stuff and little potato slices. Mix and match. See what tastes good together. (Hint: Everything.) You’ll figure it out.

The yaki-mandu ($6.99) is a plate of fried dumplings filled with minced beef and veggies. Are you getting a theme here? The theme is beef. Korean food has lots of beef in it, and that, if nothing else, should convince all of you to give it a shot.

Do you like fish? I do! I’m a pretty big fan of mackerel, which is why the mackerel gui ($12.99) was my first choice out of the gate. It’s a whole broiled fish. There are bones. Fish have bones. Just a heads-up, in case you didn’t know that fish have skeletons and you might have to eat around them. The meat is firm and mild. The skin is oily and delicious. Go to town.

As much as I love a whole fish just showing up at the table, the scene-stealing dish was the dol-sot bibimbab ($12.99). You can get it with beef or tofu, but either way, it’s a big pile of perfectly cooked rice in a so-hot-it-will-burn-you stone bowl, covered in fresh and pickled vegetables and a fried egg. As you stir it, you’ll scrape browned, crispy rice off the bottom. It’s an amazing mix of sour and spicy, hot and cold, crunchy and tender. There’s truly something for everyone, but mostly you, because you won’t want to share with anybody else.

Be aware — the rice that just came off the sizzling-hot bowl is also sizzling-hot, thanks to the transitive properties of heat. Let it cool down after you stir it before you start shoveling it in your gaping maw.

My advice is to take a bunch of people with you and share a little bit of everything, because I haven’t even gotten started on this menu and I’m already hungry for more.

Make an adventure of it! Try the weird stuff! You are almost certainly going to become a fan of Korean food after this, and all of your friends will think you’re cultured and knowledgeable about foreign cuisine. You’ll probably get to pick where to go to eat from now on. That’s the sweet spot, dude. Ride that train to the grave.

But no one will blame you if you just choose Dong-A again. I can’t wait to head back and try the rest of the menu, especially the different varieties of bulgogie. If it’s anything like the bibimbab and jap chae, it’ll be a meal worth Hulking out over.