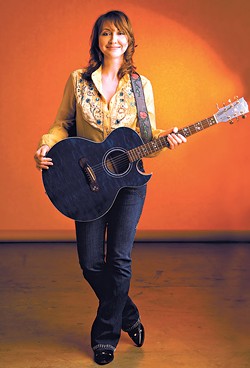 However, she found her own way to stardom and was Country Music Association’s Female Vocalist of the Year in 1994. Her breakthrough single “Don’t Tell Me What to Do” hit Billboard charts in 1991 and was followed by a string of hits, including “Shake the Sugar Tree,” Latin-flavored “Mi Vida Loca (My Crazy Life)” and her signature song “Maybe It Was Memphis.”

In 2013, Tills and Morgan teamed up for the duet album Dos Divas. The two singers toured together briefly in 1996 as part of the Kraft Tour, along with Carlene Carter. But today, she said the road is much different.

“Back then, we felt the pressure to build our names as solo artists. It was very competitive,” Tillis said in an interview with Oklahoma Gazette. “We really didn’t know each other well or appreciate how much we had in common. We rode on our own buses and said goodbye as soon as the concert was over. Now, it’s just a couple of buddies, and with all the other female band members, it’s kind of like a rolling slumber party.”

It took a while to overcome the competitiveness of the past, Tillis said.

“Fortunately, we found our rhythm, and the closer we got as friends, the better the show has become,” she said. “We still spar, but it’s always just to amuse ourselves.”

While Tillis has been absent from the charts and mainstream radio for a few years — her last studio album was 2007’s Rhinestoned — that might change. Tillis said she is writing songs and has new material ready to share.

“I have some record offers I’m really excited about,” she said. “I may have gone overboard writing and looking for tunes, but I love that part of the process.”

Tillis endeared herself to many Oklahoma fans following the Oklahoma City bombing in 1995. Her single at the time, “I Was Blown Away,” was climbing the charts when she asked her record company to pull it from radio for fear of negative connotations.

“That just seemed like the thing to do at the time. I was in shock like everyone else,” Tillis said. “I hate to think it was anything but just showing good manners.”

Other than prepping for her new album, Tillis recently completed filming a cameo for an episode of the ABC drama Nashville, which airs this fall.

When she’s not on the road, she said her life is quite simple.

“I used to go out every night with my friends like a lot of 20-somethings do, but once my career kicked into high gear, most of that fell by the wayside,” Tillis said. “Actually, I wish I’d known a long time ago how much fun being boring is.”