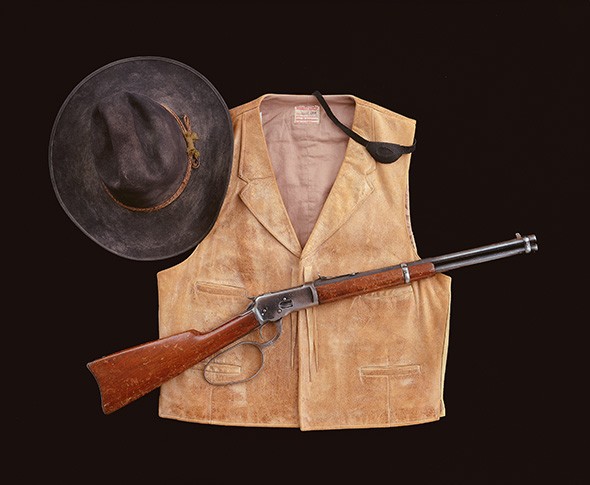 Two Grits - A Peek Behind the Eyepatch

Rooster Cogburn said, “Looking back is a bad habit,” but the 50th anniversary of True Grit has inspired a retrospective exhibit. On display through May 10 at National Cowboy & Western Heritage Museum, 1700 NE 63rd St., Two Grits - A Peek Behind the Eyepatch compares and contrasts the 1969 and 2010 films. The exhibit features costumes, props and other items from the film, including a script belonging to John Wayne, who won an Oscar for playing Cogburn in the 1969 version, and a Winchester rifle he wielded in the iconic climax. The hat and eye patch Wayne wore in the film are positioned opposite the ones worn by Jeff Bridges, who was nominated for an Oscar for playing Cogburn in the 2010 film directed by Joel and Ethan Coen.

“Our hope is it might engage some of our younger audiences who are obviously far more familiar with the Coen brothers than they are with Henry Hathaway, who was the director of the ’69 film, but at the same time, John Wayne’s a giant,” said Michael Grauer, the museum’s curator of western art and McCasland Chair of Cowboy Culture. “We have a constant and consistent stream of people who come here to see John Wayne material. … What all museums are challenged with today is connecting with millennials.”

“Ultimately, it probably should be called Three Grits because in the exhibition, we compare it with the original novel, how each did or did not hew close to the book,” Grauer said. “When the Coen brothers’ film came out, they made a big deal about how their film was more accurate to the book and also, ostensibly, more accurate to the language of the 19th century, the 1880s, when the story is set. It’s been pretty interesting to get to determine those comparisons.” 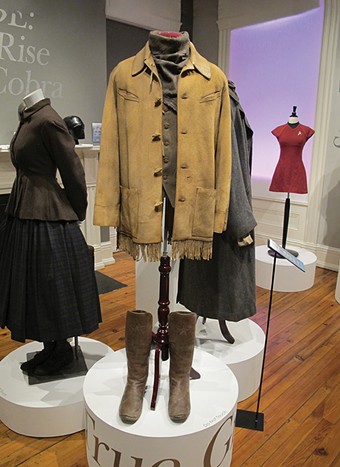 The two films differ from their source material and from each other.

“Both filmmakers took a completely different approach,” Grauer said. “The ’69 film was basically a John Wayne vehicle. The Coen brothers, of course, are always quirky, and they added things in their film that are not in the book, a couple of scenes that are completely made up, completely fabricated, but they at least attempted to try to get the grittiness and the darkness of the story, and ultimately, it becomes a dark comedy in a lot of ways.”

The newer film’s darker tone is indicative of a more modern idea of the American West, but all three versions of True Grit are made up.

“Everyone gives Hollywood great credit for being a barometer for the American public, and frequently, more often than not, they’re just wrong, but I think the attempt at accuracy resonated with audiences at the time,” Grauer said. “There was an attempt on the part of the Coen brothers, in my opinion, to kind of create this sort of historical docu-drama, sort of a pseudo docu-drama, when in fact, it’s all fiction. … I think that the Coen brothers’ is as close as you’re probably going to get in clothing, language, etc. Both films take liberties with the novel, and of course, the novel is a work of fiction, ultimately.”

Many people’s idea of that period in American history comes from fiction, Grauer said, because they “take their cue from mythology about the West.” Part of the museum’s mission is to give visitors a more accurate depiction than most movies or TV shows offer.

“We needed a hero, and the cowboy was the convenient hero, and ultimately,
it spread around the world.”
—Michael Grauer tweet this

“Our goal is that they leave better informed,” Grauer said. “Their decisions are theirs obviously. Sometimes there are preconceptions that are hard to dislodge. For one thing, John Wayne was a very tall man, 6’4”, but he had tiny feet, and having his boots in the exhibition has been kind of an eye-opener for people. … It’s just little things like that. Our job here at the National Cowboy Museum is to tell that whole story. The idea that a lawman is a cowboy or a man with a gun is a cowboy is one of the greatest fictions ever prevailed upon the world by Hollywood or moviemakers. Most gunmen weren’t cowboys at all. That blurring of those lines between lawmen and outlaws and working cowboys is something that we take very seriously here, and so a lot of what I hear when people are departing is, ‘I had no idea.’ That’s a win for us.” 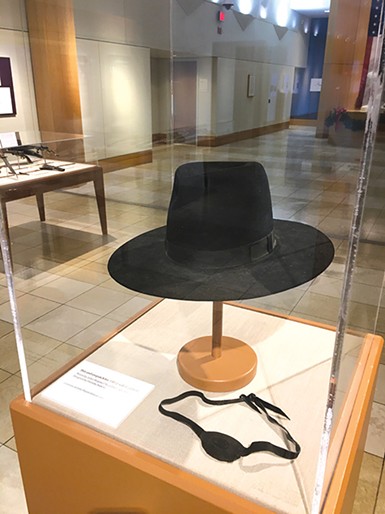 The popularity of the mythologized cowboy in the 20th century was partially a response to what Grauer called “’50s Cold War stuff.”

“We needed a hero, and the cowboy was the convenient hero, and ultimately, it spread around the world,” Grauer said. “I mean, there’s no more popular symbol worldwide than the American cowboy. … At that time, there was a great deal of fear in the country and there was a need to believe in, regardless of what your particular culture was, a hero. Now it’s satirized … and it’s fashionable to ridicule that. It’s easy to look backward 50 years and ridicule people, but we weren’t around when that was going on and there was a great deal of fear, and it was a pleasant place and safe place to be on a Saturday in a movie theater, watching good guys beat the bad guys.”

The mythology surrounding Wayne, born Marion Morrison, has been “under assault” recently, Grauer said, but not because of his smaller-than-expected shoe size. A resurfaced 1971 Playboy interview in which Wayne used a homophobic slur and voiced support for white supremacy prompted a student protest of an exhibit honoring Wayne at University of Southern California and calls for John Wayne Airport in Orange County to be renamed. However, Wayne remains a “towering presence” in American culture, Grauer said, and the actor features prominently in National Cowboy & Western Heritage Museum’s history.

“John Wayne’s been part of this institution since its founding,” Grauer said. “He actually rode a white horse from downtown Oklahoma City to Persimmon Hill to basically cut the opening-day ribbon.”

Though Cogburn dominates both film versions, the book’s main character is Mattie Ross, the teenage girl who hires him to avenge her father’s murder, played by Kim Darby in 1969 and Hailee Steinfeld, who was nominated for an Oscar, in 2010.

“What we’ve done in the exhibit is put Mattie up front,” Grauer said. “We really want to emphasize that she’s the hero. She’s, in fact, the one who has true grit. She talks about how she’s looking for a man with true grit when in fact, the true grit in the story is her own, and Portis made that very clear because he narrates the book in the voice of Mattie when Mattie was an old woman. … In both cases, in my opinion, the filmmakers lost sight of that, and my hope is that it resonates with younger audiences, especially with young women, because I have two daughters who are strong women, and my fiancée is a strong woman and my mother and my sister, et cetera. That’s a big part of the Western story, the prominent role of women. That sometimes gets shoved aside.”