doubleVee's Jack the Rider takes listeners along an unbeaten path 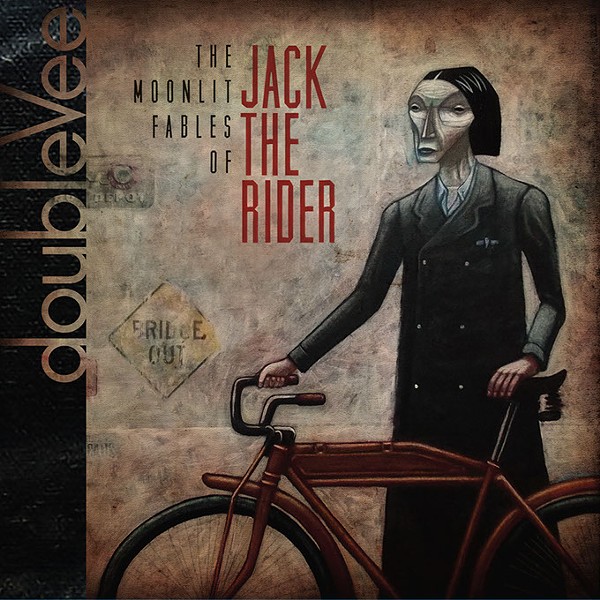 To play doubleVee’s new album The Moonlit Fables of Jack the Rider is to enter another dimension — one not only of sight and sound, but of mind.

Like The Twilight Zone, the proper debut from couple Allan and Barb Vest is enticing in its peculiarity. The pair ditched predictable music conventions to take chances and create a visceral and alien alternative-rock experience. The album follows the adventures of fictional protagonist Jack in an off-kilter, parallel world.

Moonlit Fables, released Feb. 10, might be doubleVee’s studio debut, but the band is the product of two trusty creative minds. Allan was the vocalist, multi-instrumentalist and primary songwriter for former Norman-based indie-orchestral pop band Starlight Mints. The act toured with high-profile bands, including The White Stripes, Violent Femmes, Chainsaw Kittens, Liz Phair and The Flaming Lips.

Allan’s music has also been featured in television shows Malcolm in the Middle, Californication, One Tree Hill and Gossip Girl.

Barb worked 16 years in public radio before meeting Allan. She wrote, hosted and produced Filmscapes, a nationally syndicated film music show that allowed her to interview many of her idols, like Philip Glass and Danny Elfman.

Both built careers by pushing the bounds of creativity, so it is no surprise that the pair looked to the surreal for its first album.

Allan and Barb tag-team vocal duties, and the singers contrast and complement each other well, as evident on album opener “Jack the Rider,” and later in “Dangerous World.”

But what might actually be surprising is that doubleVee chose to bring a concept approach to its debut. Many bands develop their first project as a promotional, introductory showcase of what they’re capable of, saving the more highly creative visions for later in their discographies.

Barb said they arrived at the fleshed-out Jack concept almost by accident. The band made its debut in 2012, digitally releasing a three-song EP that became the framework on which Moonlit Fables was built.

“As we kept working on the songs, we saw how they could go together,” she said. “Then ‘Jack the Rider’ itself has a story to it, so we just took it from there.”

Though there is a loose concept in place, the couple insists the music is open to listener interpretation. Some songs were made with certain ideas in mind — “Dangerous World” is inspired by alcoholism — but Moonlit Fable’s message is whatever someone ends up taking from it.

“We’re not trying to push any kind of theory, necessarily,” Barb said. “That’s what we hope people take from it, that it’s a journey. We’ve had people say, ‘Oh, are you Jack?’ but no. Jack is everyone. You are Jack and we’re all Jack.”

If Moonlit Fables feels surreal, it might have something to do with the unlikely sequence of events that led the couple to each other and eventually into doubleVee.

Barb first encountered Allan at Norman Music Festival in 2009. Starlight Mints was performing, and Barb was photographing the fest for her webzine. For an unknown reason, security let her into the press photo area, where she unknowingly took her first snaps of her future husband.

The two were formally introduced by Derek Brown (current Flaming Lips multi-instrumentalist and former Strarlight Mints keyboardist) at The Conservatory (now 89th Street Collective). Allan lit up when he heard Barb was the mind behind Filmscapes, of which he was a fan. The couple hit it off and eventually married in 2015.

Allan, who is adopted and had grown up without knowing anything about his birth family, received life-changing news in 2016 when an Ancestory.com DNA test matched him with a half-sister he’d never met.

After a few failed attempts, Allan reached his sister via email. She was thrilled to hear from him and later introduced him to a half-brother as well as Allan’s biological father, who lives in California.

It’s possible Allan inherited some of his musical aptitude from his dad, who owned several music stores in Houston before moving to the West Coast. The identity of Allan’s birth mother remains a mystery, though the couple has information indicating she was a musician in the Houston area.

“I could die today being satisfied knowing my father’s side of the family,” he said.

The Tim Burton-esque album art for Moonlit Fables was designed by Utah-based artist Grant Fuhst and based on a brief story about Jack written by Barb. The band took that work a step further, contacting an animator in London to bring to life Fuhst’s Jack and creating a fully illustrated music video for “Jack the Rider.”

Outside response to the video, like the album, has been positive. Allan said they have even heard from parents who say their children have made a strong connection with their music and the animated video.

“That’s great, to hear stuff like that,” Allan said. “We want it to be a broad range.”

There are no gigs planned yet for doubleVee, though Barb said they are planning ways to make a live performance a spectacle worthy of the project’s music.

The band would also likely need to add a few additional members to put on a proper live set, she said.

Regardless of when a show might get booked, doubleVee is treating every band decision with care.

“We’re taking it a day at a time to see how things go and how album sales go,” she said. “We’ve really pretty much invested our life savings into this album, so we’re being cautious and waiting to see.”

Find The Moonlit Fables of Jack the Rider at doublevee.net.