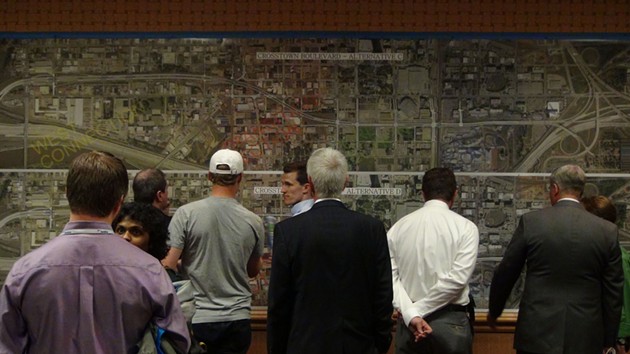 An hour before 18,000 passionate Thunder fans roared inside Chesapeake Energy Arena, there was a slightly smaller crowd of equally passionate citizens across the street at an open house hosted by the Oklahoma Department of Transportation (ODOT) to showcase four ideas for a crosstown boulevard in downtown Oklahoma City.

“They call it a boulevard, but it’s a highway,” said Burt McAnally, owner of the Oklahoma City Farmers Public Market near the site of the proposed boulevard. “The portions that are elevated are going to kill development even if you make it look pretty. I don’t care what [ODOT] says.”

Dozens of citizens attended some portion of the open house on May 7, and several, like McAnally, had strong words of disapproval for any boulevard plan that includes portions of raised roadways similar to an old stretch of Interstate 40 that was torn down last year.

“This makes no sense,” said Jill Adler, who threw her hands in the air after speaking with an ODOT official.

Crosstown Boulevard represents one of ODOT’s largest projects and has become one of the most controversial. Opponents of the proposed boulevard have become louder in recent years and claim ODOT isn’t listening to their concerns.

“That’s not true,” said Terri Angier, chief of media and public relations for ODOT. “Frankly, the fact that this boulevard hasn’t been built yet is because we want to work with the public. The fact that we and the city wanted to listen to the public is why we are here tonight and haven’t built it already.”

Angier said ODOT hopes to pick one of the four alternatives presented last week in the next 60 days and construction could start within the year.

Project evolution  Officials with the city and ODOT said public comments have impacted the design of the boulevard, and even those who still aren’t entirely pleased with the options being presented admit it reflects changes they have asked for.

“Alternative C is dramatically better than where we first started,” said Jeff Bezdek, a member of Friends for a Better Boulevard, a grassroots group that is advocating for a pedestrian- and urbanfriendly boulevard through downtown.

Of the four options presented by ODOT last week, Alternative C received the highest rating based on metrics the agency used to evaluate cost, environmental impact and traffic functionality. Bezdek said Alternative C reflected some of the ideas proposed by his group.

“But it could still be better,” he added.

Bezdek said Alternative D appeared to be the best option for downtown, as it has direct access to Classen Boulevard and Western Avenue, does not have elevated portions and has better accessibility to downtown streets. However, Alternative D also received the lowest rating on ODOT’s scale.

City officials also said the boulevard plan has improved over the past year.

“Over a year and a half of public comments, there have been some significant changes to the original concept,” said OKC’s public works director Eric Wenger.

The next step ODOT officials said public comments from the open house will be collected and another public meeting will be scheduled in about 60 days to present the alternative the agency would like to move forward with.

Paul Green, director of operations for ODOT, said construction on the boulevard could begin within the year if no major changes are made.

“It could start late this year; that’s feasible,” Green said. “But we have a lot of things to overcome.”

Not everyone is ready to go with one of ODOT’s four plans. Ward 2 Councilman Ed Shadid said he was disappointed in the structure of the open house and felt more changes needed to be made to the plans.

“I thought last night was inadequate in terms of a public meeting,” Shadid said. “On the second floor of the convention center during the NBA playoffs? That wasn’t right.”

Shadid questioned ODOT’s metrics for ranking each alternative and said the boulevard acts as an expressway at some points in downtown.

“We have time to make changes,” Shadid said. “We just saw [ODOT’s] plans. I think the public and the city council has the right to digest it.”