The owners of Brielle’s Bistro expand into Automobile Alley with the opening of Magnolia Bistro. 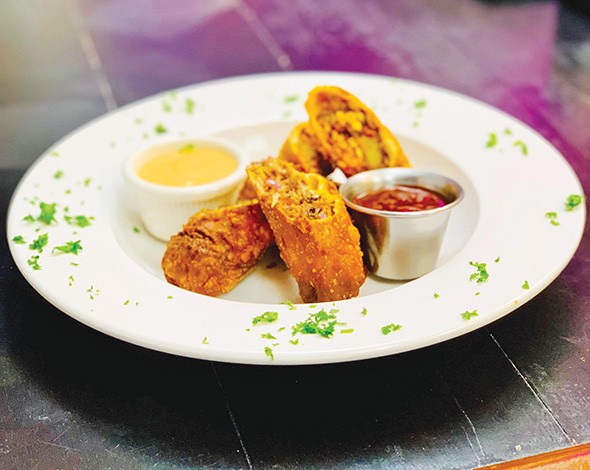 Located in the former Fit Pig location, 722 N. Broadway Ave., Magnolia Bistro is chef Johnson’s opportunity to expand on the Cajun and Creole offerings from Brielle’s.

“At Brielle’s, I wanted that to be solely Cajun and Creole, but everything is based on demographics for the area, so I had to add some traditional stuff, which is why we have the chicken-fried steaks, meatloaf and breakfast all day,” Johnson said. “So when Magnolia came about, my wife was like, ‘You need make it all Cajun and Creole so that we can add things we always wanted on that menu.’”

Staples like crawfish étouffée, chicken and sausage with gumbo and smothered blackened catfish remain on the menu at Magnolia, but Johnson is flexing his Southern culinary muscles by adding Natichitoches meat pies, which are like Cajun empanadas with a mixture of beef and pork. He has also added chicken fricassee that is wine-bathed and smothered in sauce and a new take on shrimp and grits that lets the grits cool before adding them to the deep fryer and covering in a tomato-based sauce.

“With the meat pies, I was trying to figure out what I could add to the menu that says ‘New Orleans,’ and that stuck out in my mind,” he said. “I’ve done it a ton of times, but it’s different and I don’t know of anyone else who had it on the menu. Once we posted the picture online, we had someone say they wanted a dozen.”

Shrimp and grits is a Low Country specialty and Johnson has a traditional offering on the Brielle’s menu, but he said he wanted to put a different spin on the dish with a new texture of a fried exterior and creamy interior.

The appetizer section keeps Brielle’s famous fried-green tomatoes topped with crawfish rémoulade but adds crab beignets, boudin balls and surf and turf eggrolls that are a partnership with the food truck Tia’s Home Cooking With a Southern Flavor, which provides the a brisket egg roll, and Johnson adds the flavors of a traditional crawfish boil and a pair of dipping sauces.

Po’boys are served on six-inch baguettes with the choice of blackened chicken, catfish, blackened or fried shrimp and alligator, the latter of which Johnson said is a surprisingly popular option at Brielle’s Bistro. The Who Dat po’boy takes the sandwich to another level by offering a 12-inch option that is topped with blackened shrimp, fried green tomato and lump crab.

“The spice level here will be higher than over at Brielle’s,” Johnson said. “It’s handcuffed me a little bit out there, but we’ll be able to do it here.”

“I’m originally from Florida,” he said. “A lot of people think I don’t know how to cook Cajun, but I don’t consider myself a one-trick pony. I can cook all types of food, even baking. I can do desserts, as well. Louisiana is Southern as far as the history except for the French part of it. That part came easy because I was raised on fish and grits and things like that.”

Magnolia Bistro will only operate 10:30 a.m.-3:30 p.m. Monday-Friday to target the surrounding office buildings. Johnson said that he might consider expanding the hours to 6 or 7 p.m. in the coming months, but he still needs to check in on Brielle’s at nights and on weekends.

“Ten people will bring 100 just because they’ll be going back to office buildings,” Johnson said. “If it’s good, they’re going to be like, ‘Hey, check this out.’”

“We’re happy to be part of this area,” Kaylee Johnson said. “It’s a good spot. Just be sure not to pass us by [on Seventh Street].”

Johnson met his wife while they both briefly worked at Pappy’s Diner, 207 S. May Ave., but he left to go to Platt College’s culinary arts program despite having decades of the experience in the industry because he was attracted to its business program. 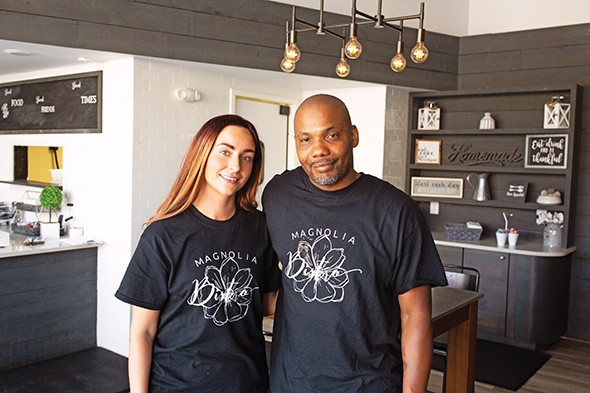 The Johnsons opened King’s Catering & Cuisine and excelled at the catering aspect, but they struggled to attract a regular restaurant crowd. When the Johnsons moved to the Spencer area, Dwayne kept his eye on a location that would eventually become Brielle’s Bistro, which opened in early 2018.

“The next thing you knew, it was like, ‘Boom,’” Dwayne Johnson said of Brielle’s Bistro’s business. “I still think we can hit a whole other level out there. It might be standing room only before you know it. A lot of people still don’t know about it. …We’ve only been open 16 months, and to be in this position is a blessing.”

Brielle’s Bistro is named for their daughter, who was born with the rare condition arthrogyropsis multiplex congenita (AMC), and she has undergone numerous surgeries to increase use of her extremities.

“Brielle is doing well. I do this for her. I work this hard for her,” he said. “The condition is different in each individual, and thank God it wasn’t as extreme as some that I’ve seen. They’ve done a great job on her hands and she’s started to use them more. She’s still not walking, but we anticipate that she will within a year. Sometimes it takes up to four years to be able to walk.”

Two of Johnson’s three sons help in the kitchen at Brielle’s, and his desire to provide a comfortable life for his kids drives him to work seven days per week.

“I used to work for other people, and I would put that same amount of passion in there,” he said. “I tell my cooks all the time, ‘You have to be able to follow before you can lead.’ If you want to have anything of your own, you have to care about what you’re doing. I go out to eat every now and again, and you can tell that it’s people going through the motions.”