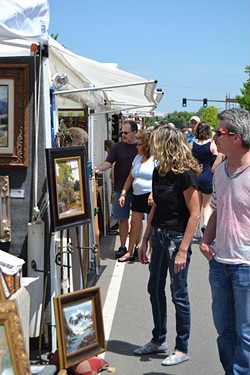 Festival marketing manager Elena Listen is in her fourth year with the annual event.

“We’re on a budget,” she said, “so working with Outlaw Nation, we were able to have more well-known bands come out and play.”

Of course, this year’s arts festival also showcases more than 120 artists, who will set up their booths featuring mixed media, sculpture, photography, painting, jewelry, pottery, designer crafts and more along the streets of downtown Edmond.

Another major art festival draw is the food. Kona Ice, Let’s Do Greek, Smokin’ Okies Mobile Smokehouse and over a dozen more food trucks will descend on three-day event to serve hungry guests.

The downtown festival has become a family tradition for many, Listen said. The appeal stems from the fact that there really is something for everyone.

The event also is an annual boon to the Edmond economy. Listen said many downtown businesses try to stay open or establish special hours just for the festival.

Some of the economic benefits are realized even after the festival tents are put away. Walking the streets free of vehicle traffic, guests will sometimes spot a new or interesting store.

“A lot of people will see a shop they’ve never seen before and come back to visit on a different date,” Listen said.

The event is only possible, Listen said, through the help of its many sponsors. It is on a constant quest to better itself, and with a significant milestone anniversary on the horizon, organizers are open to new ideas to celebrate the occasion.

“We’ll have some new bands out, so I think it’s going to be a really fun and unique year,” she said. “Since next year’s our 40th, we’re looking for ways to make it even bigger and better.”

To accommodate this year’s event, Festival Market Place will close 6 p.m. May 3. There will also be a number of roads closing in the downtown area from 7 a.m. May 4 through 9 p.m. May 8.