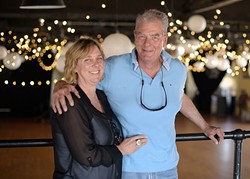 The up-and-coming Farmers Market District is known for its array of shops, bar and dining options and the historic OKC Farmers Public Market building. The area’s focal point was once Delmar Gardens amusement park, the 40-acre, boardwalk-lined home to horse races, a water slide, a dance pavilion, a baseball park, a penny arcade, a swimming pool, a zoo, a beer garden, a trolley and more.

The district featured amusement rides, including a wooden roller coaster, and a 3,000-seat theater that drew the day’s top names, including stage and film star Lon Chaney Sr. and screen cowboy Tom Mix.

The venue flourished for years, but by 1910, the prohibition that arrived with statehood, along with seasonal flooding and the inevitable arrival of mosquito swarms, conspired to diminish the venue’s popularity.

The waterway — renamed the Oklahoma River in 2004 — was eventually transformed into a 7-mile stretch of river lakes, trails and parks.

Urban sprawl of the 1970s pulled traffic from downtown, including the west-end district. Even so, the venue’s Antique Mall opened the following year and grew into the state’s largest shop of its kind through the mid-’80s. It still operates Tuesday through Sunday at the same location.

In 2002, the McAnallys purchased the building and the six acres it sits on and invested millions more in renovations. Today, OKC Farmers Public Market again welcomes a popular farmers market, and vendors sell fresh, locally sourced goods to customers from across the region.

The McAnallys also are managing members of Delmar Gardens Food Truck Park, which recently launched for the season at 1225 SW Second St.

The district now draws crowds like it did decades ago, said Jody McAnally, and the park also hosts an eclectic collection of eateries and special events, including farm-to-table dinners presented by Urban Agrarian.

“Food truck parks are an integral gathering place, and most of the larger cities have really good ones,” she said. “We’re going to bring the area back to its original history as a food hub. It’s a natural extension of what we do, plus the addition is a nice homage to the history of the area.”

“I love the work, the offerings and the customers,” Burch said. “Andrea used to help me organize our farm-to-table dinners, and I’m happy she’s organizing the Sunday market.”

Delmar Sunday Market events will feature family-friendly offerings, including food demonstrations and a youth activity booth. Koester said downtown needs the district and its farmers markets because the neighborhoods that surround it lack options for locally sourced, fresh food.

“It’s a food desert over there,” Koester said. “We are working with Oklahoma Child Nutrition Services and the Oklahoma Department of Human Services’ Supplemental Nutrition Assistance Program (SNAP) to help low-income families purchase nutritious food from authorized stores like ours.”

She hopes the monthly events help establish the venue as “one of the go-to destinations in Oklahoma City.”