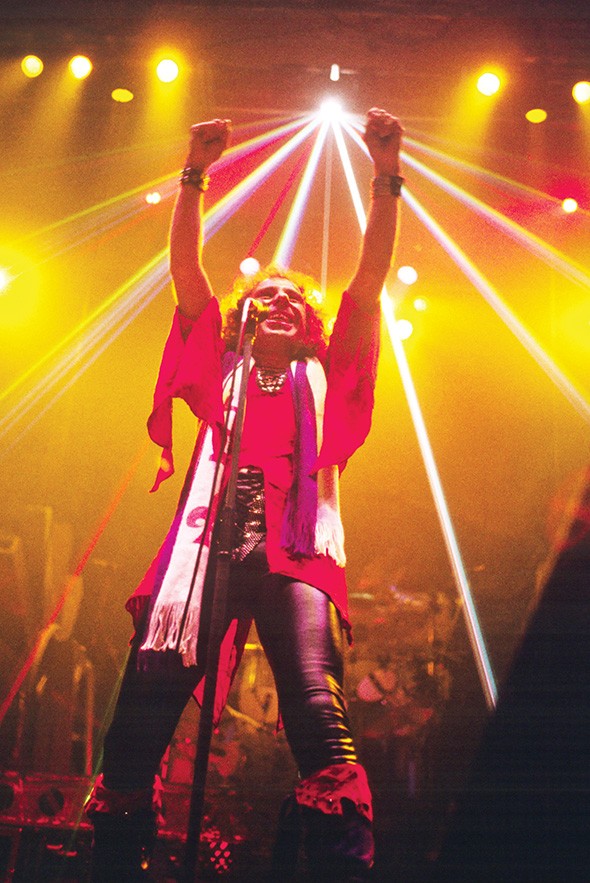 Legendary metal vocalist Ronnie James “Dio” Padavona died May 16, 2010, but thanks to a combination of 19th- and 21st-century technology, he returns to Oklahoma City on a US tour — sort of.

The Dio Returns tour, featuring a pseudo-holographic Dio, stops in OKC June 20 at The Criterion, 500 E. Sheridan Ave. Joining the digital projection of the rock god onstage are former Dio bandmates Craig Goldy (guitar), Simon Wright (drums) and Scott Warren (keyboards) as well as bassist Bjorn Englen and vocalists Tim “Ripper” Owens and Oni Logan, who began touring with the band, rechristened Dio Disciples, in the years following the original frontman’s passing. Wright, who began drumming for Dio in 1990 after leaving AC/DC and lived in the singer’s house for several years, said seeing the computerized representation of his old friend and bandmate originally felt odd.

“It was a little weird at first,” Wright said. “I mean, it was a little strange and stuff. I think I, initially, was a little bit, kind of, ‘Wow!’ you know? But I got used to it. It didn’t freak me out because I thought it was a great idea.”

In an interview with Revolver, Chad Finnerty, director of creative development at Eyellusion hologram production, explained the Dio “hologram,” like the holographic Tupac Shakur and Michael Jackson that preceded it, is “not technically a hologram” though it is “probably the closest thing” modern technology can achieve without equipping everyone in the audience with virtual reality goggles. Merriam-Webster defines a “hologram” as “a three-dimensional image reproduced from a pattern of interference produced by a split coherent beam of radiation (such as a laser),” but the digitized Dio, Finnerty said, is actually a two-dimensional projection of a three-dimensional model utilizing “a reflective screen that bounces an image onto a see-through screen.” Known as Pepper’s ghost, the illusion was first described in the 16th century but popularized in Victorian London theaters in the 1860s and famously used in Disneyland’s Haunted Mansion attraction.

Wright said he was intrigued when Wendy Dio, the singer’s widow and business manager, first introduced the idea of a holographic Ronnie James Dio, and he was impressed with Eyellusion CEO Jeff Pezzuti’s respect for his deceased bandmate.

“We sat with him and we talked with him,” Wright said. “The first thing that kind of grabbed me about Jeff was his enthusiasm. He loved Ronnie. He was a kid when he saw Ronnie, and he’s been a huge fan ever since. He’s a really cool guy. He travels with us and stuff. He’s almost like a member of the band in a funny kind of way.”

✖ "It’s just great to be up there, playing and hearing Ronnie’s voice again."
—Simon Wright click to tweet

The hologram debuted at the German heavy metal festival Wacken Open Air in 2016 and toured Europe in 2017 before it was revamped for the current US tour. In an interview with Patch.com, Wendy Dio said the new design is “a million times better” than the original.

“I wanted Ronnie to look more like Ronnie,” Wendy Dio said. “I was very picky about the eyebrows actually. Maybe someone else wouldn’t have noticed it, but I noticed it. I wanted to make sure that everything was perfect.”

The U.S. tour began May 31 in Fort Myers, Florida, but a planned June 2 stop in St. Petersburg, Florida, was canceled. Though Wright said the band still has “a couple of little things to iron out,” the show was canceled not due to snags with the computer technology but because of a dimensional problem in the real world.

“As far as I was told, the venue got the dimensions wrong for the actual equipment that needed to go in there, so, at the end of the day, it wasn’t safe for that to be in the building,” Wright said. “There’s codes and restrictions and fire regulations. That’s what I heard. I didn’t deal with it, obviously, but at some point, hopefully, we’ll be able to go back there and maybe play a bigger building.”

In the new show, the band fronted by the Dio hologram plays some of the singer’s best-known songs from his time as lead vocalist in Rainbow (“Man on the Silver Mountain”), Black Sabbath (“The Mob Rules,” “Heaven and Hell”) and his own eponymous band (“Rainbow in the Dark,” “Holy Diver,” “The Last in Line”). According to Setlist.fm, the set is briefer but similar to the one the singer himself performed at OKC’s now-closed In Cahoots in February of 2001. From Wright’s perspective, the biggest change in playing with a hologram as the lead singer is using a click track to ensure he stays completely synced with the pre-recorded vocals.

“The difference is that when we play with the hologram, I have to play with a click because the vocal is taken from different performances from the past,” Wright said. “The only time I ever played with a click is when we’ve done some albums using Pro Tools … but I’m getting used to it. It’s not a problem. It’s just great to be up there, playing and hearing Ronnie’s voice again. It’s marvelous, just absolutely marvelous.”

Reviewing the May 31 show, Fort Myers News-Press’ Charles Runnells wrote, “Dio did look kind of cool in his black leather pants and white cross shirt as he struck dramatic poses, threw his famous ‘devil horns’ hand gesture, bounced to the beat (sort of) and thrust out his microphone for audience sing-alongs. But here’s the thing: Hologram Dio never really felt real. His mouth didn’t quite sync with Dio’s recorded, awe-inspiring vocals. … His movements looked too herky-jerky, manic and nonstop to feel lifelike. And the whole thing lacked that hard-to-nail-down but immediately recognizable spark of life.”

In his influential 1970 essay “The Uncanny Valley,” Japanese roboticist Masahiro Mori described the “eerie sensation” one feels upon discovering that something mimicking human appearance and behavior is not, in fact, human.

“Imagine a craftsman being awakened suddenly in the dead of night,” Mori wrote. “He searches downstairs for something among a crowd of mannequins in his workshop. If the mannequins started to move, it would be like a horror story.”

Wendy Dio told Patch.com that critics are “entitled to their opinion” but asked that “people come and see the show first before criticizing.” Wright agreed, noting that videos shot by concertgoers posted online do not capture the full effect.

“It’s the same deal when you see video of a show or any concert; it doesn’t do it justice,” Wright said. “You’re not there. You can’t smell it and feel it. It’s just a whole different thing. … The power of it is really not captured on a tiny iPhone screen; that’s for sure.”

Regardless of the tour’s popularity, Wright said he does not think he will ever be made into a hologram himself.

“I highly doubt it,” Wright said, “but I’d be extremely flattered if that happens.”