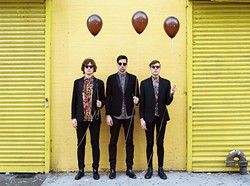 If members of Dreamers are “asleep to the waking world,” as their manifesto states, then someone needs to pinch them right now because they are on one exhilarating ride in the waking music realm.

The band has only been together for a short time. Even so, it has earned a burgeoning amount of accolades for its chimerical, punk- and power pop-tinged tunes layered in distortion and ridiculously catchy vocals.

But it’s not playing around. In fact, the Brooklyn-based trio’s manifesto, posted on its official website, clearly outlines its mission. It reads, in part, “We are impractical. We do not listen to those that doubt us. We push the boundaries … We rewrite the rules.”

Indeed, considering the attention it has garnered from outlets like Billboard, Spin and Earmilk, its statements have proven true. The band has also spiked alternative radio charts. And it has done all of it with zero major label support.

“We’re just doing whatever we think is best,” said guitarist and vocalist Nick Wold. “It’s all kind of surreal, but it’s what we’ve been working toward for a lot of years [as musicians], so it all makes sense. It is amazing and kind of strange.”

Wold and drummer Chris Bagamery formed Dreamers about a year ago, but they grew together in Seattle, playing jazz during the city’s grunge heyday. They soon transported themselves into New York’s competitive jazz scene, but it wasn’t too long before they once again changed direction and decided to get back to their roots.

“We’re all about grunge and stuff, just from being from Seattle,” Wold said. “We were raised in that world.”

They played with other musicians in a band called Motive until that splintered, returning Wold and Bagamery to their nascent creative journey. Dreamers was born.

Today — just a little over a year after releasing its first EP — the band is again recording new songs, this time at legendary Sound City studio in Los Angeles, and taking its time flirting with record labels.

It’s also in the middle of a three-month tour. For a full one month of that time, it opens for Stone Temple Pilots, which brings its show to Diamond Ballroom, 8001 S. Eastern Ave., on Monday.

Wold said he has a soft spot for the Sooner state.

“I love Oklahoma — my girlfriend is from the state. And do you know this band Broncho? We’re good friends with those guys too,” he said.