Katie Wicks is not hitting on your man.

Wicks is a popular bartender at Guyutes, 730 NW 23rd St., who, like many drink makers and cocktail shakers, loves her job.

“I am there to serve them and let them be themselves. That’s what makes my job fun,” she said.

But as much as she loves people — and being a bartender is absolutely a job for a people person — there are those nagging little customer behaviors that seem to latch onto a shift and drag it down, down, down.

“I hate it when a couple sits at my bar and the whole time the lady is just assuming I’m hitting on her dude,” Wicks said.

Don’t be that guy (or gal). Life is so much better for everyone involved when those who tend bar and those who tend to drink at bars get along. Here, for your guidance, are some do’s and don’ts from Oklahoma City’s bartenders.

The base amount to tip a bartender is $1 per drink. That includes water, bottles of beer, soda and shots. A tip is not just a way to say, “Good job!” to your server; it’s a payment for the time and effort that goes into slinging drinks.

“Why should I pay extra for someone doing his or her job?”

Because of this number: $2.13. Federal minimum wage is $7.25 per hour, but bartenders and servers are considered tipped employees, which means they can make as little as $2.13 per hour. Without tips, a bartender could take home as little as $85.20 for a 40-hour workweek. Oklahoma’s cost of living might be low, but it’s not that low.

“Employers use a tip credit exception. So if I make $100 in tips and work five hours, they are allowed to say that I made $20 an hour, basically,” he said.

Employers can pay staff $2.13 an hour if they make enough in tips to meet or exceed the $7.25-per-hour federal minimum wage.

Keller said he doesn’t know many people in the service industry who get money on their paychecks.

“I didn’t have a paycheck over $5 all of last year, if I even got one with any money on it in the first place,” he said.

Keller said most customers tip about 20 percent unless the bartender completely screwed up.

“Even still, me personally, I wouldn’t go below that, but I wouldn’t expect a 20 percent tip for screwing something up,” he said.

For beers, Keller said $1 per pour or bottle opened is okay.

Wicks said she once had an allergic reaction to cashews at a restaurant and still tipped her server.

“No one deserves to be stiffed unless they purposely fucked up to the max,” she said. 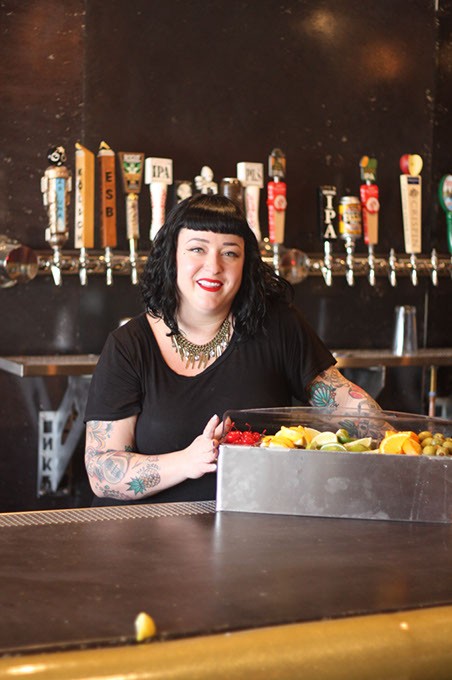 Of the many reasons to go to a bar, one sticks out above all others: People go there to drink.

Yet there are many patrons who walk into their local watering holes with no idea what to order. That’s okay, Wicks said, but only to a point.

“If I come up to you and you say you need another minute, that’s fine,” she said. “But after four or five times and you don’t decide, I am going to have to assist other people.”

That’s a cue to wait for the bartender to come back around, not begin frantically waving her down like you’re trying to get the attention of someone with a T-shirt cannon. You had a chance. You will get another. But people who know what they want get drinks faster than those who hem and haw.

While it’s acceptable to ask a bartender for a suggestion, you need to provide some basic information, Wicks said. Do you like gin, vodka or whiskey? Are you looking for a sweet drink or a boozy cocktail?

“Ask me to decide for you and not give me any tips on what spirit you prefer when I am slammed and you will get a beer,” she said. “When I am obviously helping another customer and making drinks, don’t just start spouting off your entire order because I will have to ask you again later anyway.”

The best bartenders are models of efficiency and multitasking, and they ask customers to be prepared, too.

“It’s [midnight], the bar is 15 deep, you stand in line for five minutes and then when you get to the front of the line, you have the sack to turn to your friends and then decide what everyone wants to drink,” he said. “The cherry on top is when they complain about the lines being so long after all of this.”

That doesn’t just apply to touching bartenders and servers, but that’s a pretty important lesson, too.

Handsy customers might be the norm, but that doesn’t mean it’s OK. Sexual harassment isn’t confined to office environments, and it is just as unwelcome when it comes from a customer as a coworker.

But it seems guests are also getting handsy with the bar’s stock of produce. At The Pump Bar, 2425 N. Walker Ave., owner Ian McDermid said some customers treat the fruit caddy — the covered container full of cherries, sliced limes, lemons and other cocktail garnishes — like a buffet.

“Keep your hands out of my damn fruit caddy. My hands are cleaner than yours,” she said.

And while we’re talking about cleanliness, it’s also important to pay in a sanitary manner. Rumbaugh said his No. 1 pet peeve with customers is when he holds out his hand for payment and they put the cash down on the obviously wet bar top.

At Fat Dog Kitchen & Bar, 1234 N. Western Ave., bartender Katherine Stone simply asks for customers to be nice. She might work at an establishment with “dog” in the name, but she’s no canine. That means snapping fingers, whistling or waving money in the air to get her attention are no-nos.

Guests at a bar are like guests at your home; sometimes they just need to leave.

Keller said a bartender stops serving customers for the protection of everyone involved.

“They’re helping you because they can clearly see you don’t need any more,” he said. “It is not a green light to be a raging asshat. Trust me; you already were a raging asshat in the first place.”

Hall said it might be frustrating to be cut off, but often, the staff will just ask guests to drink water and slow down.

“The louder and more obnoxious you get, the rougher the ride out of the establishment will be,” Hall said.

When someone who makes more money from you drinking says you shouldn’t drink any more, it’s best to get a ride home and live to drink another day.

Because bartenders love you. They want to see you again — especially if you follow the rules.

Great bartending isn’t the only way to have a killer party, but it sure doesn’t hurt.

Veteran bartender Katie Wicks said the first step is stocking the bar with some essentials. If there’s a liquor the group absolutely abhors, it’s OK to leave it off, but many of these are multi-tool players that are used in many mixed drinks.

Vodka: Still closely associated with Russia, vodka is an almost-flavorless clear spirit that is often made from fermented grain. Mixed with seasoned tomato juice, it makes a bloody mary. Pour it with orange juice for a screwdriver. Or chill it down and mix it with vermouth for a martini, vodka martini.

Gin: A close cousin to vodka, gin is another clear grain spirit, but with a predominant flavor of juniper berries. It’s used in a more traditional martini as well as classic drinks like French 75 and Tom Collins.

Rum: Liquor distilled from molasses or sugar cane, rum is an amber-tinted delight usually associated with sailors. It’s used in a number of sweet drinks, including mojitos, daiquiris and piña coladas, but it’s also pretty good mixed with Coca-Cola.

Tequila: Frequently blamed for wild behavior, tequila is liquor distilled from the juice of agave plants, which are mostly found in Mexico. Its best-known use is the beloved margarita, making it a must for any home bar.

Not everybody drinks liquor or alcohol, so keep a bottle each of red and white wine, a few varieties of beer and soft drinks on hand, too.

Preparation is key, so it’s a good idea to have a few basic cocktail recipes under your belt. Make them for yourself to taste before trying to play mixologist for the whole party.

“If you want the drinks to taste the same as they would at the bar, it’s all about portioning,” she said.

One benefit of home bartending is the ability to pour a stiffer drink than you might get at a bar, but that doesn’t mean they’ll taste good. Bartenders follow recipes for a reason, Wicks said — the drinks taste better in the right proportions.

Use a jigger to measure liquor and other ingredients until you develop an eye for the right pour.

Once you have the basics down, start playing with flavors, she said.

“Over time, you start to understand which liquors work well other flavors,” Wicks said, “like how Hendrick’s Gin blends well with cucumber.”

Good drinks don’t guarantee a good time, but they can stop an otherwise fun evening from grinding to a halt.

“Nothing is worse than a house party with shitty drinks,” Wicks said.

One great thing about alcohol is that it helps you forget. Unfortunately, that means alcohol sometimes makes you forget important information, like how to be a bartender’s favorite customer. Bookmark this handy-dandy guide and stow it in your wallet or purse next time you visit one of Oklahoma City’s fine drinking establishments.

• $1 per drink minimum, including water or soda if you’re taking up a seat at the bar.

• $2 per drink for more complex concoctions.

• If you’re tabbing out at the end of the night, pay 20 percent.

• If you can’t afford to tip on cheap beer, then please drink your cheap beer at home.

• Buying the bartender a shot after their shift is great, but it doesn’t replace a tip.

• It’s OK to look at the menu, but when a bartender asks what you want, be prepared to answer.

• If you don’t know what you want to drink, your place in line is forfeited until everyone else waiting has been served.

• Ask for recommendations when it’s slow and the bartender can help. When it’s busy, have your go-to drink order ready.

• Servers are there to help, not to be groped or fondled.

• Keep your hands out of the fruit caddy. It is not an all-you-can-eat buffet. Helping yourself to the garnishes is rude and unhygienic.

• If a bartender reaches out to accept payment, don’t drop the money on the wet bar.

• When you’re cut off, for whatever reason, it’s time to go.

• Bartenders have a legal responsibility to cut off customers who have had too much to drink.

• The bigger the fuss, the less likely you’ll be able to return to that bar, so behave.