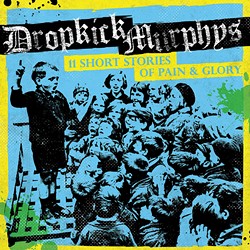 Dropkick Murphys will be forever tied to its home city, Boston, and for good reason. The hard-hitting Celtic punk band not only oozes with gritty, tough East Coast ethos, but plays a large annual St. Patrick’s Day concert in Boston each year. The band made its widespread national introduction to audiences through 2006’s The Departed, one of the most Boston movies ever made.

Still, the band known for its rowdy live performances has an Oklahoman to thank for “I’m Shipping Up to Boston,” the song that was so key in establishing The Departed’s visceral aesthetic and the band’s only platinum-selling single. A poem by Woody Guthrie was found by the band in the folk legend’s archives years after its creation and directly inspired the tune’s lyrics.

It released its ninth and most recent album, 11 Short Stories of Pain & Glory, in January 2017. This year, the band celebrates the 20th anniversary of its debut, Do or Die. Only two current members — percussionist Matt Kelly and bassist, co-lead vocalist and principal songwriter Ken Casey — were around for the album’s original recording. The rest of the current roster includes lead vocalist Al Barr, guitarist James Lynch and multi-instrumentalists Tim Brennan and Jeff DaRosa.

Kelly recently spoke with Oklahoma Gazette about the band’s busy season, its ties to Woody Guthrie and his status as a self-described beer nerd.

Oklahoma Gazette: When was the last time you all had a March off? It must be the busiest time of the year for you.

Matt Kelly: It was 1996. It certainly is the busiest time of year. The tour leading up to it culminates in the Boston run. Even before we regularly had our St. Patrick’s Day gig in Boston, we’d be on tour during that time of year. 1997 was the first Paddy’s Day gig in Boston, then somewhere in the Pacific Northwest in ’98, and then in ’99 we played Coney Island High in NYC. I believe that in 2000 we played our first of eighteen consecutive annual Boston St. Patrick’s Day runs.

OKG: Amazingly, it’s now been 20 years since the release of Do or Die. How big of a deal is that to the band?

Kelly: It’s amazing that it’s been two decades! That era will always be a special time for me, as I had joined the band in early 1997, so probably half of the songs were written before I was in the band. And I was a fan and had gone to see the band many times in ’96 and early ’97… but I think the songs we wrote for Do or Die were classic.

These days, with such a huge catalogue of songs, I think the foundation and precedent for musical experimentation that Do or Die set is integral to what we do as a band. Oddly, Ken and I are the only guys left in the band who recorded that album, so the other guys joined as fans. They probably all have different perspectives on the gravity of our first album.

OKG: How do you think the album holds up over the years? It’s an album some fans would say is the band’s best.

Kelly: They say you have your whole life up till then to write your first album and a year to write your second one. Everyone says a band’s first album is their best because, typically, it’s the first one you hear from a band and it’s often in your formative years. However, these days, 22 years in, a lot of fans weren’t alive for the first album, so it doesn’t resonate as much with them as it does with the old guard.

I haven’t listened through the record for a couple years — it’s weird to listen to your own music — but when I did, I was happy with everything except the drumming. The sound of the guitars and vocals is awesome and unique for the modern era, where every album sounds synthetic and sterile. The producer [Lars Frederiksen of Rancid] made sure to capture the sound and energy of our live set and bottle it on an album.

OKG: Arguably the band’s biggest ever song, “I’m Shipping Up to Boston,” was written in part by Oklahoma’s greatest music legend, Woody Guthrie. Can you please shed some light on the origin of that song? I’ve heard you all based it off a poem from Guthrie’s archives.

Kelly: Woody Guthrie wrote these five lines in his notebook: “I’m a sailor peg, I’ve lost my leg; climbing up the topsails, I’ve lost my leg. I’m shipping up to Boston.” We had a semi-formed instrumental that we started working on in a dressing room in Madrid, Spain, in 2001, and after being approached by his daughter and granddaughter — a fan of our band — we were able to look at his archives. Those lines stood out to us, obviously. Also, the song “Gonna Be a Blackout” were his lyrics as well. They were the lyrics to the title track of that album.

OKG: You might have told this story before, but I’m not sure I’ve heard it. How did that song wind up on The Departed in the first place?

Kelly: Leonardo DiCaprio was a fan, and Robbie Robertson had to do with the soundtrack to the film, so they both suggested using that song.

OKG: You released 11 Short Stories of Pain & Glory a little over a year ago now. On this one, you all made the decision to step away from Boston and record somewhere that is not much like Boston at all, West Texas. Now that there has been adequate time to reflect, what effect do you think that had on the overall album?

Kelly: We probably got twice as much done in three weeks in Tornillo, Texas, as we would have done at a studio at home. We were isolated from the world on a ranch in the middle of nowhere. It was eat, record, listen, sleep, repeat for three weeks.

OKG: I saw that Magic Hat Brewing Company has helped concoct a special Dropkick Murphys Barroom Hero beer with a tie-in to your charity foundation, Claddagh Fund. Have you had a chance to sample it yet, and are you a fan? What’s the perfect beer, in your opinion? Is there a perfect beer?

Kelly: Yeah, that’s pretty cool of them. We went up to Vermont and sampled some of the styles of beer and came up with a template for what it should be. When we were up there, it was to discuss the making of it, so no, I haven’t tried the final product. However, I sampled a few that it would be similar to. It’s basically a style called English Mild. It’s a not-too-aggressively hopped ale that you really don’t find much of in North America. It’s a “session” style beer, which means it will probably be 4-5 percent (alcohol).

For me, the perfect beer is probably Eureka by Tree House [Brewing Company] out of Western Massachusetts. It’s a blonde ale with huge dry hopped juicy flavor and about 4.1-4.3 percent alcohol. I’m not looking to get bombed! Also, there are a lot of incredible breweries in New England these days, so we’re spoiled for choice.

OKG: Anything else you all want to add about the show here in Oklahoma City?

Kelly: I’d say thanks for the 21 years of support! Our first gig there was with the Main Street Saints in late ’97, if my time-addled memory serves. It’s always been a great stop on tour, and the loyalty of our supporters has always been in our hearts.