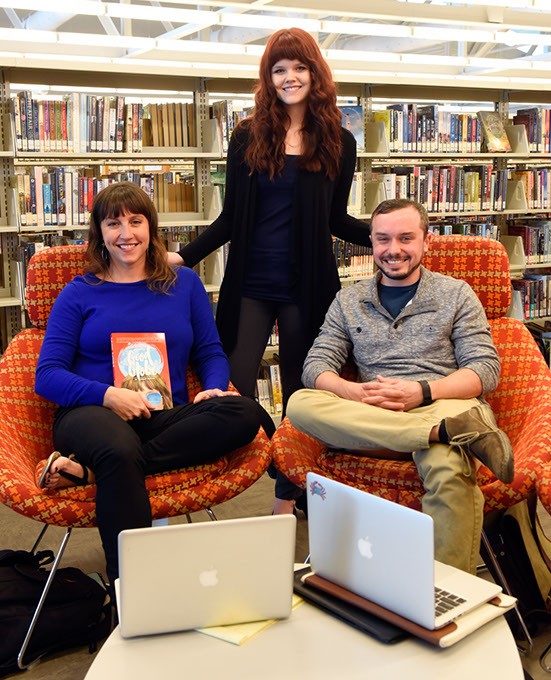 Once upon a time, three bright young students met while pursuing their master’s degrees and decided to form a boutique publishing company. When it came time to name it, they thought and thought, and then they thought some more.

“We didn’t want to be thought of as a traditional publishing company, and we wanted our name to reflect that,” said Shelby Simpson, the Oklahoma City company’s first (and thus far only) author, co-founder and resident extrovert.

Simpson and her cohorts, Jake McClure and Mary Wuestewald, thought Drunk Publishing was funny and meaningful to them, but not in the most obvious way. They’re a literary bunch, after all.

“We thought about Baudelaire and his poem with the line ‘Get drunk and stay that way. On what? On wine, poetry, virtue, whatever,’ and something clicked,” Simpson said.

Her book, Good Globe: Time for a Change of Hemisphere, is Drunk Publishing’s pilot project, and her forthcoming book will be its second.

The Charles Baudelaire poem she quoted is called “Get Drunk.”

They’re all avid readers, and their preferences are all over the map, sort of like Simpson’s stories.

Wustewald is the yin to Simpson’s yang and speaks with a calm wisdom and maturity beyond her 25 years.

“We want to do more than a traditional publishing house would do for its authors,” Wuestewald said. “The industry standard is that a writer, if they’re lucky, will earn 10 percent of a book’s sales. We want our authors to earn 50 percent.”

“I’ve been a writer my whole life, and the day I learned about how the publishing business works, I fell apart,” Simpson said. “Why would I want to be in a club that treats its members like that? I spoke with one of my professors about it and I came up with the idea to crack the code.”

They intentionally have not met up with or even read much about, called or otherwise shown any interest in how other, more established denizens of the publishing world operate. They decided, pragmatically, to simply view books as products and market them that way. That is, after they carefully select works they love and can throw the full force of their collective brainpower behind them.

What they’ve learned in their first year could fill a book.

“For one thing, editing is a long process. And formatting a book for Kindle is a long process,” said McClure, the quietest member of the group. “We want every part of what we do to highlight Oklahoma. … The artist for the cover of Good Globe, Jenkin Hammond, is an Oklahoman.”

When asked what else they learned, Wuestewald took a deep breath before she spoke.

“Dealing with Amazon print is harder than dealing with Kindle,” she said. “The print-to-order percentage structure is foggy, partly because there are so many distribution channels like libraries, wholesale, discount bookstores, Amazon Direct, local stores and our own website, and you get a different percentage for each one.”

Another facet of the business is calculating the cost of producing the book itself.

“We know we can easily afford about 300 pages, or about 40 chapters,” Wuestewald said.

The fledgling publishing house has learned to be judicious with blank pages, which cost the company almost as much as printed pages and can dramatically affect the bottom line, including the project’s marketing budget.

“Book marketing is exciting and heartbreaking,” Wuestewald said. “You’ve got to get the book to reviewers three to six months before it’s published.”

Lots of reviews are pay-to-play, she said. Some will even give publishers the option to post the review or not, based on if they like it.

“We’ve been reviewed by some of the best,” Wuestewald said. “We didn’t get in on time for The New York Times, but we got an amazing review from Kirkus Reviews.”

Here’s an excerpt: “Simpson offers a lively, inventive, and often hilarious book about her around-the-world adventures. In the first chapter, she double-dog-dares readers to plunge into ‘a world of bloated goats, warm Coca-Cola, dust facials and unpredictable sleeping arrangements.’”

Indeed, Simpson’s story collection is engaging, boisterous and sometimes shocking. About the lax airport security in Fiji, she wrote, “I felt like I could have worn a marijuana jacket with a hat made out of dynamite sticks and carried in a bag full of teenagers with price tags stuck to their foreheads.”

Simpson has been all over the world and wants us all to travel, too, which becomes quite clear in her book. But what she really wants is to be a successful author. She’s enough of a realist to understand that talent alone won’t get her there. The drive and determination of at Drunk Publishing very well might, though.