Leaving home is one thing, but leaving a homeland? This movement — from country to country, from home to the unknown — represents a major strand of American history and the narrative crux of Dublin Irish Dance’s touring production of Stepping Out.

The production highlights a story of emigration and immigration, as Irish-born Ciara decides to leave her home country for America. Performed by Irish dancers from Celtic Woman and Michael Flatley’s Lord of the Dance and accompanied by an eight-member band and vocalist, Stepping Out draws on a rich history of Irish immigration that boomed substantially from the middle of the 19th century to the early years of the 20th century.

During the period, many Irish citizens sought to escape famine and seek out new occupational prospects through emigration. Irish emigrants numbered in the hundreds of thousands and then the millions, often facing collective discrimination and drawing from similar wells of experience, but their stories remain unique. Annie Moore, one such immigrant, gained historical acclaim for becoming the first person to pass through Ellis Island when it opened in 1892.

Such narratives of change and transformation inform the two-act structure of Stepping Out. The first number of Act I, “Dawning of the Day,” begins in Ireland; the act ends with Ciara’s decision to leave her country. Act II picks up with Ciara’s arrival (“Shores of Amerikay”) and follows her life as a new immigrant. Costuming details also track Ciara’s narrative arc, as her clothes become more colorful and modern.

Although Stepping Out is a story about leaving, its sonic and thematic resonances communicate the power of memory, culture and tradition. Culturally significant musical instruments, such as uilleann pipes (a type of bagpipes) and the bodhrán (a frame drum) help evoke a distinctly Irish sensibility.

The music in Stepping Out combines a mixture of traditional Irish folk songs such as “The Parting Glass” and ones specifically written for the show, said lead singer Megan Burns.

“One of the songs I sing is called ‘Carrickfergus,’” Burns said. “Carrickfergus is a lovely little town in north County Antrim, and the song is about missing your hometown and crossing overseas and reflecting on your life at home and the people you’ve left behind.”

Through this fusion of sonic and geographic specificity, Stepping Out nuances the immigrant experience through the lens of Ciara’s experience while acknowledging the stories of others like her (“An Emigrant’s Tale”). Her story, magnified, contains both love and loss, and the show evinces the personal sacrifice of immigrants through Ciara’s relationship with Aidan, her Irish lover.

Songs such as “Le Chéile” (Gaelic for “together”), “Always There” and “Set You Free” signify Ciara and Aidan’s relationship and Ciara’s decision to emigrate. Once in America, Ciara joins a community of other immigrants but misses her home. Ciara — much like Eilis Lacey, the protagonist of Irish author Colm Tóibín’s 2009 novel Brooklyn and subsequent 2015 film — meets a potential new lover in America, Irish immigrant Sean.

“Not only does she arrive to America, but she’s also met somebody else and is torn between who she chooses,” Burns said of Ciara’s choice. “Does she choose her childhood sweetheart, or does she choose the man that she’s just met when she came to America?”

Once Aidan immigrates to America, the stakes become even higher, creating a love triangle that symbolizes the tension between familiarity and newness, between stasis and change. Sean and Aidan face off as well (“Between Worlds,” “Taking a Stand”).

“We have many a cappella dances that express the anger between the two men, and that’s how we portray the emotional aim of the story,” Burns said. 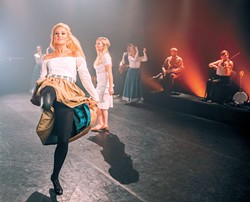 From its title (a play on Irish step dancing) to the dances throughout, Stepping Out is a show that literalizes and abstracts the idea of movement. Whether it’s on the stage, between dancers or the larger conceptual journey from Ireland to America, the show visualizes this narrative movement.

For Burns, the moves of the dancers tell the story.

“I think that’s a testament to how professional and how amazing our dancers actually are,” she said.

Burns, previously a full-time teacher, has also made moves across the world. Originally from County Armagh, Ireland, Burns spent time teaching in Qatar, where she also performed in a band. Upon returning to Ireland, she worked various singing gigs before the Dublin Irish Dance tour directors contacted her last January about joining the tour for Stepping Out.

“Of course, when somebody asks you if you want to tour the USA, you say you would drop everything and go,” Burns said. “Whenever I learned a little bit more about the story, I was so much more interested in it.”

Burns said the past year included rehearsals and preparation.

“We can enjoy the tour now that the hard work is done, and we know everything like the back of our hands,” she said.

The show, which involves the audience at certain points, has allowed for the touring company to connect with many people in America who have Irish roots, Burns said.

“We’re really looking forward to going to Oklahoma,” she said. “Probably the best part of the show is being able to interact with the audience after it and getting feedback and hearing their stories.”