“This is why we teach the classes,” Dykstra said. “You, as parents, are the first and most important teachers in your children’s life.”

The earliest years of life are crucial in so many ways, including how they set children on paths leading toward — or away from — achievement. It can be a vicious path. Children who enter kindergarten not ready to learn struggle to catch up with classmates, failing to read proficiently by the end of the third grade, which often leads to ongoing difficulties in school and dropping out of high school.

It’s an education outcome that was made well known by a sociology professor who compared reading scores and graduation rates of almost 4,000 students. According to the 2011 Annie E. Casey Foundation report Double Jeopardy: How Third-Grade Reading Skills and Poverty Influence High School Graduation, a student who can’t read on grade level by third grade is four times less likely to graduate by age 19 than a child who does read proficiently by that time. Add poverty to the mix, and a student is less likely to graduate on time than his or her more proficient, wealthier peer.

Getting children to read on grade level by third grade and later achieve a high school diploma begins years before a child enters school. Like an achievement gap in academic performance, a school readiness gap exists that separates children eager to listen, learn and succeed at school and children unprepared to do so, explained Mary Ellis, a specialist for Oklahoma County’s school readiness program called Early Birds.

For the past six years, Smart Start Central Oklahoma, through Early Birds, has assisted hundreds of families in equipping their children with the skills and enthusiasm necessary for learning when they start school.

“We arm parents with as much information as possible,” Ellis said. “What parents do in the home is going to change the culture and give their children the smart start advantage when they enter kindergarten.” 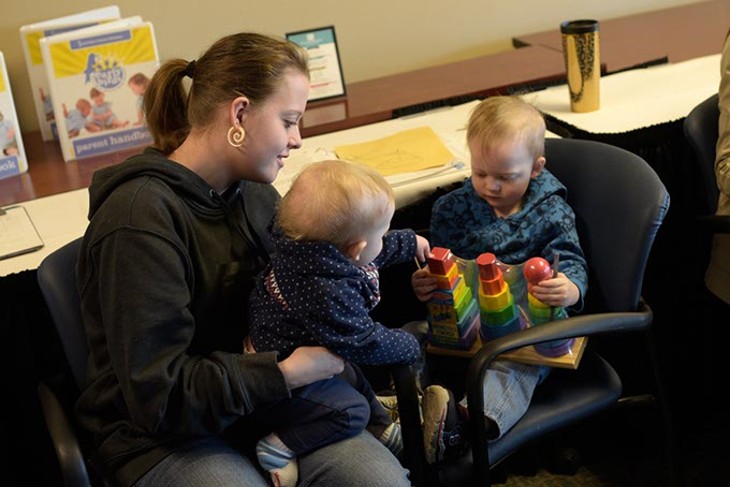 Jamie Stidham smiled and laughed as her toddler son held up a purple square, part of a stacking toy, and called it cheese. Next, he grabbed a red circle with a hole and said, “Doughnut.”

Moments earlier, Stidham and seven other parents were handed tote bags filled with activities to incorporate into playtime. Stacy Dykstra, executive director of Smart Start Central Oklahoma, led the class. She encouraged parents to let kids play with the geometric sorting board, a toy that gives children the chance to recognize shapes and colors and develop sorting and counting skills.

As a toddler separated all the red pieces, Dykstra told parents there was no wrong or right way to play. She urged them to talk to their child when playing.

“We support parents as their child’s first teacher,” Dykstra explained before the class began. “What we mean by a teacher is the parent is the role model. … We provide a kit for parents to be fully armed and give their kids what they need.”

Early Birds is designed for parents of children from newborns to age 5 and parents-to-be. Three free 90-minute courses taught in English or Spanish are offered over the course of the year in addition to a prenatal class, resulting in a total of 16 classes over five years. Parents acquire knowledge on social and emotional development of children as well as pick up hands-on and brain-on activities that focus on the fun of learning. Activities range from learning toys to simple things parents can do every day, Ellis said.

“We teach about everywhere learning opportunities, and they are everywhere,” Ellis mentioned games like “Help me find a red car” when driving and creating a separate child’s grocery store list for finding everyday items like oranges. “When your child is in the bath, say, ‘I am putting shampoo on your head,’ and ‘Soap on your feet.’”

While these might seem like simple strategies, child development experts say they can make all the difference. As parents talk, sing and read to their children, the children’s brain cells are strengthening.

Parents who reside in the Mid-Del, Oklahoma City, Putnam City and Western Heights districts can enroll in Early Birds, which is supported by grants and donations. Recently, the program expanded through community partnerships with organizations like Metro Technology Centers and Variety Care to reach more parents in Oklahoma County.

When classes end, parents leave with kits filled with educational toys and tools to further promote learning at home.

To drive the point home, Ellis tells parents, “These are not just toys. With the knowledge you’ve just learned, these are tools. Just like you would use a hammer to put a nail in the wall, these are tools to get your child ready for school.” 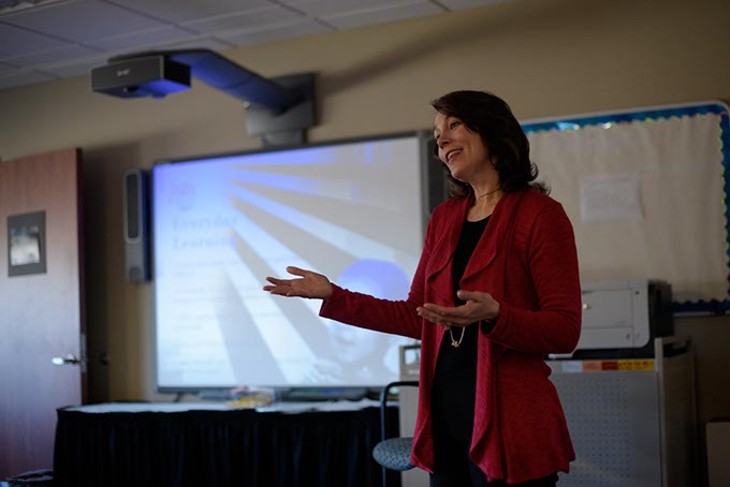 For the past two years, Liz Lee has served as an Early Birds’ community partner at Metro Technology Center’s Springlake Campus.

Lee promoted the program’s ability to empower parents, providing them with the knowledge to be advocates for their children. For instance, one parent explained how her children always arrived home from day care hyper and with no appetite. Through a group discussion with the parents at the Early Birds class, the mom was encouraged to ask the day care about snacks the children were receiving.

“That mom became a detective for her children,” Lee said, sharing that the day care provided sugary snacks before the parents picked up their kids.

After Lee spoke with the provider, the sugary snacks stopped.

Stidham, who attends Early Birds at Metro Tech, encourages fellow parents to enroll. As she put it, “Babies don’t come with a handbook,” but Early Birds provides one and much more.

“You are your child’s best teacher,” said Stidham, who first heard about the program through her neighborhood school, Fillmore Elementary in the Oklahoma City Public Schools district. “You have to constantly talk to them and tell them what you are doing. As we drive down the road, I hear my boys say, ‘Mom, I see a green light or a red light.”

“The Early Birds program engages families before formal schooling begins, forming an early relationship with the school system and the parents. Additionally, as discovered through the parent participant interviews, the program established parent networks for parents of same-aged children living in the same school district. These early connections strengthen the parent and school partnerships, which research has shown to yield the best results and outcomes for students,” the report concluded.

As the Early Birds Metro Tech class comes to a close, Dykstra asks for feedback from the eight parents about the program. It’s rave reviews from many of the parents as they explain how they’ve incorporated the last classes’ activities and toys and how their children have responded.

“This is why we teach the classes,” Dykstra said. “You, as parents, are the first and most important teachers in your children’s life.”