OKC rapper-producer WoRm welcomes friends to the table on his new album To Go Plate.

Like the name suggests, WoRm stays hungry. But with each release in his Chicken N Waffles album series, the Oklahoma City rapper-producer is inching his way up the local hip-hop food chain.

WoRm, born Sherman Johnson, is about as versatile as they come in the local rap scene. His lyric- and beat-crafting talents are of equal caliber, but it’s also becoming increasingly difficult to pin his style down as any one particular kind of sound. One day, he might be crafting a classic boom-bap beat for fellow emcee and frequent collaborator L.T.Z. The next day, he’ll be building something that could easily blend in with contemporary radio.

The broad spread of WoRm’s interests shows up on To Go Plate, a 14-track effort released on the last day of April. The project is a sequel to Chicken N Waffles, his solid summer 2016 mixtape.

Fans of WoRm’s previous work are sure to love To Go Plate. If the new project differs in any way from its predecessor, it’s with marked progression in production complexity and an impressive influx of assisting collaborators.

To Go Plate’s featured artists (let’s call them dinner guests) include the likes of L.T.Z., Chris Savage, Grand National, Trip G, Tony Foster Jr., Fresh and many more. In facilitating these guests, WoRm shows off a knack for understanding complementary styles, conforming the sound so that each vocalist slides comfortably into a lyrical pocket that fits them.

At this OKC rap banquet, WoRm is developing the menu, cooking the food, setting the table and fixing the plates. But when the feast begins, he knows when to step away and let his guests shine. That’s the mark of a good host.

Oklahoma Gazette recently caught up with WoRm to learn more about To Go Plate. In an email Q&A, topics ranged from his earliest hip-hop inspirations to recording “Serious,” his recent collaboration with Peyton Benge, in a single afternoon.

Oklahoma Gazette: What got you started with rapping and music? When did all of that begin for you?

WoRm: Man, ever since I was a kid really. I always wanted to rap but didn’t know how to get started, but one Christmas, when I was 10, my parents gave me $50 and I saw this Mixman DJ toy in Toys “R” Us (RIP) that I had to have. And from there, I would make beats on that thing and figured how to record my voice to the beats I made.

OKG: When did work begin on To Go Plate? What was the earliest concept you had going into this album?

WoRm: Actual work began around Christmas of 2016. My little brother (Trakstar Tre) gave me a record player for Christmas and my dad provided me his collection of records. I started sampling from then and making songs and beats. But most of the beats I made around that time went to LTZ’s Sophisticated Slabs. But I had always wanted to try my hand at what Chance [the Rapper] did with Surf (his 2015 album with the band The Social Experiment) or what DJ Khaled does, but actually make the beats and mix it.

OKG: This album has a lot of outstanding collaborations. How did you go about selecting who you wanted to be on the album, and how well do you think it all came together? Is collaborating something you enjoy?

WoRm: I tried not to force anything when it came to collaborating. I’m a fan of everyone on this project so I know their sound and know what they would sound like on the beats I made. So if I was making a beat and heard their voice or thought it was a good idea for them, then I sent it. After I trimmed down some of the songs from what I started off with, I felt it coming together nicely. And collaborating is dope to me because I feel I make the best music when it’s not just me. 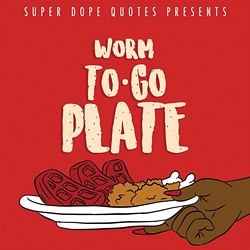 OKG: Is there any song on the album that has an interesting behind-the-scenes story to it?

WoRm: I don’t really have much of any cool stories other than “Serious” was made in like two hours. I’d seen Peyton [Benge] perform a few times around the city and thought, ‘Yo, I gotta work with him.’ His singing voice is dope. So we had a session planned; we started from scratch. I went through my loops that come with GarageBand (but I was using Logic Pro) and started to build around that. Then Peyton started humming “It ain’t even serious.” I was like, ‘Yeah, I like that. That’s the hook.’

OKG: Why did you want to name the album To Go Plate? What’s the meaning behind that?

WoRm: It’s a sequel and a pick-up from my previous album Chicken N Waffles. I wanted to stay in that idea. Also, I been cooking up hits!

OKG: Did you handle all of the production, or did you bring on any other help? Is there any kind of feel in particular that you were going for?

WoRm: I produced the whole album with the exception of “Easy,” which was produced by my little brother Trakstar Tre. This project was meant to be like a family affair, and I wanted to give him the opportunity to be on the project.

OKG: Do you have any production or rap influences or inspirations? Who would they be?

WoRm: Man, I have a bunch of influences from Big K.R.I.T., Kanye [West], J. Cole and 9th Wonder. Big K.R.I.T. and J. Cole, of course, with them being rapper-producers as well as Pimp C. Musically, in my opinion, I feel like they can provide more and it adds to their artistry.

OKG: Any big projects coming up later that we should know about?

WoRm: As far as projects, I’m working on a multitude of things. I am executive producing Changing Frequencies, Marrell Jones, Trakstar Tre, L.T.Z., and $onrae’s upcoming projects as well as working on my solo album The Recipe and the sequel to To Go Plate, which will be called Leftovers.