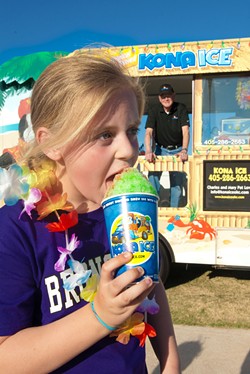 The end of H&8th Night Market as a monthly event last year could have been a blow to Oklahoma City’s booming food truck industry if Rick Vick Sr. wasn’t already building his own event.

Originally an adjacent spot for food trucks and family-friendly events, Eats On 8th Food Truck Festival & Night Market will stand alone this year with nine events scheduled for the last Friday of each month through November, starting 6 p.m. Friday.

“We got approved by the city to do nine markets because, with the potential of inclement weather, it might get cut down to seven,” said Vick, owner of The Galley Soul Food & More. “When it was announced last year that H&8th was no longer going to run their night market every month, we got a lot of calls from customers and food trucks, asking if we’d return.”

Mobile dining is a growth industry, but Vick said the only way to sustain it is for trucks to have enough events to serve customers. H&8th wasn’t just a reliable gig; it was a way for many trucks to introduce themselves to new customers. H&8th returns in June as an annual event.

So Eats On 8th is back and bigger, Vick said. The footprint has grown from Eighth Street between Robinson and Harvey avenues to include Harvey and Robinson up to Ninth Street.

The first event of the year starts small with more than a dozen trucks, but Vick said he hopes it will snowball quickly as the weather warms up. Trucks appearing at Friday’s market include The Urban Taco Shop, Oklahoma Czech Delights, OKC Grill, Big Shorty’s, Yum Pig, Kona Ice and Trevino’s Mexican Street Beast.

Vick stressed that Eats On 8th is for the whole family, with musical acts Kitty in the Middle and The Jah Mystics, a kid zone with blow-ups provided by Dilland Inflatables and pop-up vendors selling jewelry and music memorabilia.

A driving factor in setting up Eats On 8th was that Vick felt some trucks were being excluded from H&8th. Even though he now has a food truck organization — Greater Restaurants of Oklahoma On Wheels, or GROOW — he said there is enough work to go around and he wants non-association members to serve at the event, too.

“[H&8th] went out on a high note,” he said. “We’re building off what they learned and carrying on the mantle with the same level of responsibility and standards of excellence.”

He also hopes to increase customer satisfaction by addressing some areas he thinks other festivals fall short. Organizers will set up tables and chairs so attendees can sit and eat their food while watching their kids play.

And for those who can’t make it to the night market, GROOW recently signed an agreement with local Sam’s Clubs to put a version of Eats On 8th in the warehouse club’s parking lots starting April 2 at the 4101 N. May Ave. location.

Find more information about the festival on Twitter @EatsOkc.

Print headline: Rolling forward, Back for a second year, Eats On 8th hopes to pick up where H&8th Night Market left off.