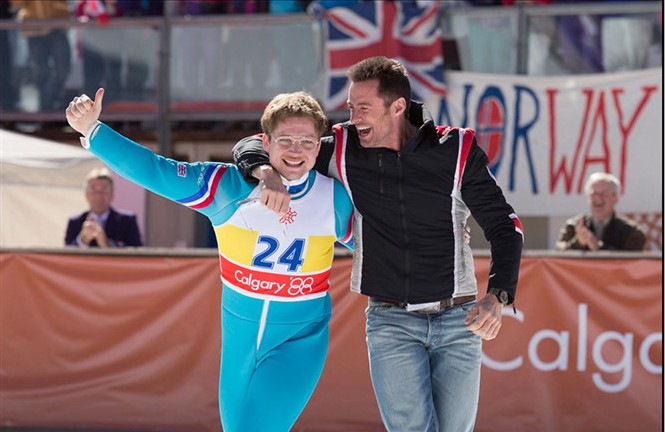 The Jamaican bobsledders of Cool Runnings weren’t the only absurd dreamers led to the 1988 Winter Olympics in Calgary by a disgraced American pro; there also was a stubborn, tubby skier named Eddie Edwards.

Eddie the Eagle brings us his journey, with all its narrative and thematic similarities to his underdog peers, from amateur to Olympian. Edwards (Taron Egerton), a downhill speed skier by training, lost an Olympic qualification bid in his chosen event due to skill level and classism by the snobbish British selection committee. Nobody wanted to sponsor a sloppy, unmannered weirdo to the represent their country.

Thus began Edwards’ pioneering escapade into the world of ski jumping. Through loopholes in bylaws and a complete void of competitors, his event switch would all but guarantee a dream trip to the Olympics. The only problems were that he had no coach, had never jumped before and was broke as a bad joke. Then the fun started.

Yes, the plot sounds beat-for-beat like Cool Runnings, but the film’s jolly acknowledgment of its own stubborn sunniness reflects the never-say-die attitude of its charming subject.

Egerton, with his bug-eyed glasses, extra pounds and prognathistic emulation of the British Habsburg jaw, is almost unrecognizable. His eccentricity accentuates his determination to a point no longer on the standard line of the typical movie athlete. He’s too dorky. We love Rocky’s grit and endurance. We love Eddie’s perseverance to fail a little less.

Supplemented by an excellent ’80s score and an elevated performance by Hugh Jackman as the reluctant, overly American coach, the film’s standard montages and plot clichés — the coach refuses to coach, eventually acquiesces; the climatic cut back to the coach, where he says “Yes!” and tries to nail that perfect tone of pride and excitement — are more than tolerable.

Each jump feels as high and as fast as necessary, though I often wished they cut them up less. We travel down the 70-meter length of the ramp along with Eddie until the moment of launch, but the immediate cutaway to an angle almost opposite of where we were interrupts our momentum like switching from a GoPro strapped to a bird to a camera on the ground below.

The dialogue, no matter how likable the leads are, frequently bumbles into the territory of children’s books and bad soap operas. With direction this solidly invested in goofy levity, the film’s plotted nuts and bolts somewhat dampen the experience. And despite being mostly set in mountain vistas and elaborate ski lodges, other than the skiing itself and a few clever press conferences, the film is pretty plain and was likely restricted by its smaller budget.

Nevertheless, it’s the quintessentially British equivalent of a Disney sports movie — not groundbreaking, but effortlessly self-depreciating, rife with irony and ready to woo children to sports through countless TV reruns.