The key to success in such a rapidly growing industry, Alyssa said, “[is] to find your niche and go with it, because if you try to do everything, it’s too much.” 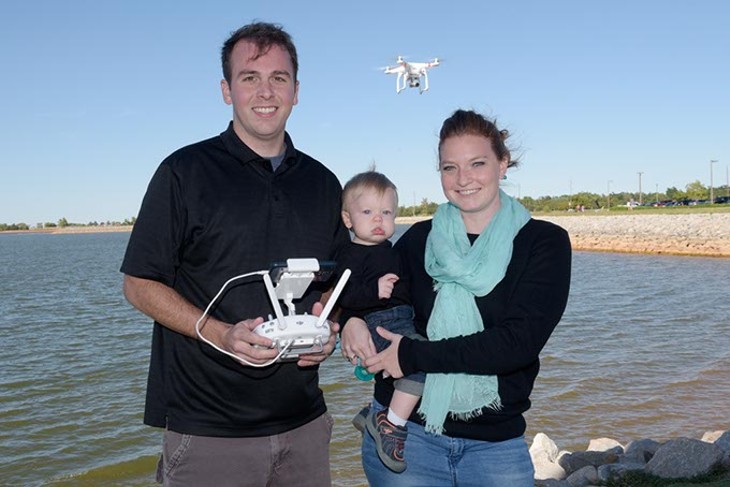 Aaron and Alyssa Brackett use drones to provide their clients with new perspectives of their city and surroundings. They own Oklahoma Drone Photography (ODP), an Edmond-based start-up the husband and wife team launched after a local architect they knew mentioned the need for effective methods to photograph his projects.

“There’s only so much you can capture on the ground,” Alyssa said.

“We’re trying to give a unique perspective to people that they haven’t seen before,” Alyssa said.

The reception has been universally positive, the couple said. The Bracketts recently spoke to Oklahoma Gazette near the lighthouse at Lake Hefner. A child pointed with delight at a device as it hovered over the water.

Onlookers asked how it worked and wanted to see what the pilot sees on his or her tablet or phone app.

“They kind of like piecing it all together and seeing how it all works,” she said.

It’s estimated that millions of drones have been sold to consumers in the United States.

The key to success in such a rapidly growing industry, Alyssa said, “[is] to find your niche and go with it, because if you try to do everything, it’s too much.”

While anyone can buy a drone, most owners are hobbyists. Alyssa explained that ODP offers professionalism as well as liability insurance, photo editing, marketing experience and quick turnaround.

“The actual quality of the product and the professionalism of our company is what are going to draw people to us versus a hobbyist,” she said.

The Bracketts have lived in the metro for three years and are impressed with the city.

“[Oklahoma City] has incredible infrastructure,” Alyssa said. “This is one of the cities that we’ve lived in that we’ve noticed the most new construction and the most new business in the area.”

Oklahoma Drone Photography became a limited liability company (LLC) at the end of July. The Federal Aviation Administration (FAA) enacted Part 107 of its regulations Aug. 29, which require all commercial unmanned aerial vehicles, or UAVs, to have a licensed unmanned aircraft (UAS) pilot to operate legally.

Aaron Brackett said he was among the first to undergo the testing, making ODP one of Edmond’s first licensed and insured drone photography companies.

The Bracketts said the possibilities for drone use are seemingly endless and span from research to special events.

Alyssa said the couple chose commercial real estate and construction photography over wedding or special events because of the new regulations. Aaron described the knowledge required to commercially operate a drone, listing height restrictions, structures that you are not allowed to fly near and rules that apply to operating drones near large groups of people.

The restrictions parallel the knowledge requirements of pilots licensed to fly traditional aircraft.

Drone operators must also register their drones, which have their own tail numbers like airplanes.

“[Drones] have become really popular. With that popularity comes risk. If you don’t know how to operate them safely, it endangers the airspace that is used by millions of people every day. If a goose can take down an airplane, imagine what a drone can do,” he said. “People need to be responsible. The licensing is the first step toward that. It definitely doesn’t take away from what we’re doing; it adds to what we’re doing, it adds to the safety of what we’re doing.”

ODP finds it easier to work with real estate agents, architects and construction companies because of the regulations. The Bracketts are excited to capture construction progression.