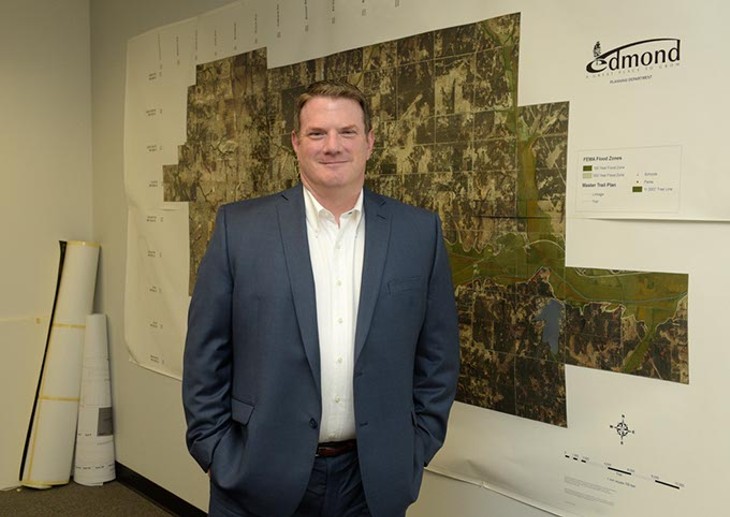 The City of Edmond, with close to 92,000 residents, is looking to the future. The city’s planning department recently launched a six-to-nine-month process to revise Edmond’s comprehensive plan, a visionary document that touches every parcel in the city and guides land use of all kinds, whether it’s commercial development, housing or parks.

The updated comprehensive plan will serve as an action guide for city leaders to sustain and improve Edmond’s economy and quality of life. The proposal, called Edmond Plan IV, was last updated in 2007.

“Edmond, I think, is at a pivotal point in its development,” Randy Entz, director of planning and zoning, told Oklahoma Gazette. “For so long, it has been thought of, or thought of itself, as a small city, town or a bedroom community. It’s more than 90,000 people now. It has grown up, and it needs to decide what it wants to be.”

A comprehensive plan can do just that, sharpening the city’s image and emphasizing the importance of the downtown area while also guiding commercial and residential growth, said Entz, who joined the Edmond Planning Department as director in late 2016 following the retirement of Bob Schiermeyer. Entz previously served as a program planner and senior planner for the City of Oklahoma City.

Located 15 miles outside of Oklahoma City, Edmond traces its roots back to the 1880s when railroad tracks were laid, resulting in a town, which led to the construction of Oklahoma Territory’s first church building and first public schoolhouse.

Once a remote agriculture and oil town in northern Oklahoma County, the suburban sprawl of the 1960s brought the first wave of new residents. With population growth, the city responded with increases in infrastructure and schools, spurring more businesses and housing additions.

“There for a while, Edmond was doubling in population every 10 years,” Entz said. “It is unrealistic to expect that to continue. Anytime a city is fast growing, it is excited to be a part of that planning, but it’s also a challenge.”

Such growth has kept city planners busy, constantly reviewing proposed developments. Like other cities, Edmond’s planners frequently refer to its comprehensive plan when presenting recommendations to city leaders. With the support of city leadership, including the Edmond City Council and Edmond Planning Commission, a long-range planner is now embarking on the rewrite, a process that involves collecting data and determining community goals in areas of land use, utility, transportation, recreation and housing.

Development has been a touchy subject in Edmond in recent years, with some high-profile proposals meeting resistance from residents.

The most notable high-profile development proposal is a Walmart Neighborhood Market at Covell and Coltrane roads. It was first submitted by Covell Creek LLC in August 2015 and remains an ongoing court dispute between the developer and the City of Edmond. Since the site plan was first proposed, residents from the nearby Asheforde Oaks neighborhood have repeatedly spoken against the proposal, sharing concerns about traffic, lighting, flooding, trees and public safety at council and planning commission meetings. Edmond City Council ultimately rejected the site plan on a 3-2 vote.

More recently, Edmond residents sounded off on the construction of 191 single-family homes on a former northwest Edmond golf course. A developer filed a preliminary plat for Coffee Creek Golf Course with the city’s planning department.

Residents, many who once looked out onto the greens, voiced concerns over traffic and the environment if the development was constructed. Additionally, there is a concern that commercial business could be proposed on the land in the future. The planning commission is expected to review the preliminary plat, or short subdivision, in coming months.

City leaders are forecasting Edmond’s growth east of Interstate 35. There are challenges to developing in that area with utilities and infrastructures. A revised comprehensive plan could address that.

Another challenge is the city’s lack of multifamily housing units, which has created a gap in the market. A revised comprehensive plan could suggest solutions.

Once updated, Entz sees the comprehensive plan as the key policy document.

“I want it to continue to be a useful document for all planning in future utilities, future streets and all things of that nature as well as to guide the day-to-day planning and zoning decisions,” Entz said. “It helps guide city leaders in their decisions and developers in their decisions. And it gives neighborhoods the chance to feel they were heard. It’s their vision as well.”

Print headline: Looking ahead; Edmond launches a comprehensive plan rewrite to help city leaders manage how the city will grow in the next few decades.