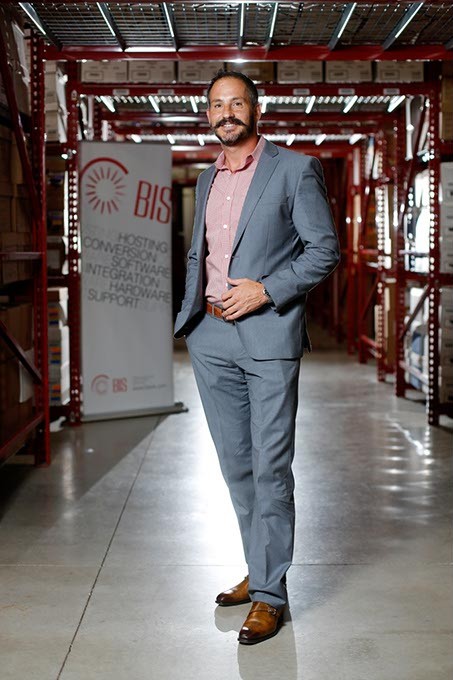 It’s quite a jump from being a sales associate at Sears to owning a multimillion-dollar company. But that’s precisely what Edmond entrepreneur Dan Rotelli did. At age 17, Rotelli left Edmond High School after his sophomore year. A short time later, he rented an apartment and went to work.

He was born in Brooklyn, where his father was a New York City police officer. His mom and dad never married, and when he was 7, his mother moved him and his brother halfway across the country to Oklahoma.

“Here my brother and I were with these thick Brooklyn accents — and attitudes to go with them — living in rural Oklahoma,” Rotelli said. “No one could understand us, and probably nobody wanted to.

Ultimately, we settled in Edmond, which is where I live now and where my company is headquartered.”

That company is Business Imaging Systems (BIS). Rotelli said he began working for the company in the late ’80s while still holding down a job at the old Sears store at Quail Springs Mall.

“I came to work as a sales person,” Rotelli said. “I didn’t quit Sears for a while even though I was working at BIS. I couldn’t — I had a wife and a baby. I was 21 years old, and I was waiting for failure to sweep me away in this outside commission sales job. I worked for about two years then made the decision to dedicate myself to BIS and being successful.”

In the early years, BIS was a company that offered scanning and microfilm equipment to businesses in the Oklahoma City area.

“We sold these machines that had lights, a camera and you placed each document individually under the camera to capture your image, then those images were put onto reels,” Rotelli said. “You had to have a viewer that magnified and projected the image when you wanted to retrieve what you had microfilmed. It probably seems archaic to a ton of young people.”

After working in sales for a number of years, Rotelli said the company’s original founder, Pete Sinclair, began thinking of selling BIS in the late ’90s. He said Sinclair was the closest he ever had to a father figure and he learned the fundamentals of being a good businessperson from him.

“Through him, I learned the two most important principles of running a business: cash flow and profit,” Rotelli said. “I also learned how to grow the business organically and run it debt-free, which requires a great commitment from your employees because they have to believe in this organic process.”

Rotelli bought BIS from Sinclair in 1997 and become the president of the company.

The folks who work for BIS deserve a great deal of credit, Rotelli said, because they have given the company its character.

Some of them have been there more than 20 years, which he said is unheard of in the field of information technology.

Under Rotelli’s guidance, the company has grown from a single location in Edmond to brick-and-mortar offices in Tulsa; Dallas; and Birmingham, Alabama. Satellite employees are located at another half dozen locations, and they serve thousands of North American clients.

Today, the company is a full-service provider and integrator of high-quality document and data management systems, a far cry from its microfilm days.

If BIS is going to be viable for the long-term, Rotelli said it must continue to change and adapt.

Rotelli said he loves living and doing business here. He said the state has a progressive attitude toward business and maverick-like approaches to success are richly rewarded.

“I would challenge other companies who have a pioneering spirit and a different way of doing business to consider Oklahoma as a base,” Rotelli said. “As anyone will tell you, I’m pretty nontraditional, so I love that aspect of Oklahoma. I also think Oklahoma has great talent reserves.”

Professionally, growing his $30 million company to $100 million is on of Rotelli’s top priorities.

Personally, Rotelli said he is focused on his health, having fun and looking forward to becoming a grandfather later this year.

His own philosophy for success is simple: Never let fear keep you from your dreams.

“I guess for me, I was so broke in my younger years, I had come from this awkward family life and I didn’t have a formal education, so basically, I had nothing to lose and, consequently, I had no fear,” Rotelli said. “If anyone can benefit from what I have been through and how I try to live my life today, I think that’s great. And if I can help people live their dreams and surpass their goals, then that makes my life all the better.”

Print headline: Professional zeal, A Brooklyn transplant goes from high school dropout to president of a multimillion-dollar company in Edmond.