“When you walk out now and see what they have, they take great pride in it and want to be a part of it,” Sinor said. “It’s a game-changer.” 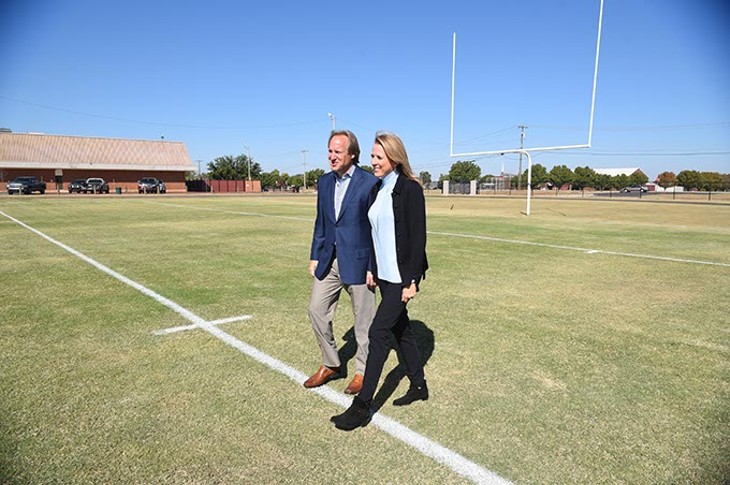 Fields & Futures has rebuilt 12 athletic fields in the Oklahoma City Public Schools (OKCPS) district. Now it’s working on a 13th and has a goal to rehab all 44 in the district.

Oklahoma City Energy Football Club partner Tim McLaughlin and his wife Liz founded Fields & Futures in 2012 and remain heavily involved in the nonprofit and its work.

McLaughlin is so engaged in the effort that he now donates $2 of each Energy FC ticket sold.

“That’s going to be six figures plus this year to the foundation,” he said.

And Keith Sinor, OKCPS athletic director, described the McLaughlins’ project as a “game changer for us.”

He pointed to Webster and Jefferson middle schools, where participation in football more than doubled since Fields & Futures rebuilt their athletic fields.

Completion of three athletic fields at Capitol Hill High School was marked Sunday with a ribbon-cutting ceremony and youth playtime. As he watched children on the field, McLaughlin said, “We’ve got a long ways to go, but we’re on the right path.”

With a unique turn of events that brought a suburban school’s student body closer to their mission, Fields & Futures is now poised to increase its staff in order to speed up the process.

The decision for one student body to help another is a generous, and some might think unexpected, one.

Three North student leaders attended the Sept. 21 OKCPS board meeting and announced their 2016 BALTO Week fundraising recipient will be Fields & Futures, with funds to be earmarked for construction of athletic fields at Roosevelt.

The McLaughlins and North student leaders spoke to Oklahoma Gazette after their presentation to the board.

Student Cameron Cato said their decision was made easier because they “fell in love with them the day [they] met them.”

A North tradition since 1995, BALTO stands for Bringing a Light to Others and engages the student body in raising money for the community.

The student organization reported that it has raised over $2 million since it began, with donations going to organizations like Children’s Hospital Foundation and Jim Thorpe Rehabilitation Hospital.

“Why we love Fields & Futures is this isn’t something that is just going to happen and be done,” said North student Emily Humphries. “By building this field at Roosevelt, it’s going to leave a lasting impact.”

The connection between athletic confidence and involvement for school children is critical, McLaughlin said, as it was in his own life.

“It’s a giant link to the academic mission,” he said. “If you look at all the studies, if you are a part of a team, you have a higher likelihood of graduating.”

McLaughlin applied the 55 percent to OKCPS and said the number should be closer to 9,000.

But what about maintenance once fields are built?

“[Money raised through Energy FC donations and from others] maintains the field[s], so we don’t just build them; we also maintain them,” McLaughlin said.

Liz McLaughlin, who is heavily involved in making Fields & Futures work, talked about why she works so hard for the foundation.

“It’s a positive for all of our family,” she said. “It’s giving back to the community. Our kids get to see that, and they get to live it and experience it and see the results. There are really no negatives; it’s fun to be us every day.”

Each student BALTO leader shared reasons they chose to support the foundation.

“I am really excited about doing this … because the community aspect of BALTO is just so important to us,” Humphries said.

Similarly, Katie Cheap is excited “for both schools to benefit from this,” as North and Roosevelt will gain insight and strength from the partnership.

“It’s something new and different than we have ever done before, so the direct partnership is going to be awesome,” added Cato.

Sinor said when he first arrived as the district’s athletic director, most fields had rocks and glass strewn across them. But since Fields & Futures started rebuilding and maintaining the fields, excitement has grown and drawn in more players.

“When you walk out now and see what they have, they take great pride in it and want to be a part of it,” Sinor said. “It’s a game-changer.”

Fields & Futures’ next project is the fields at Northwest Classen High School.