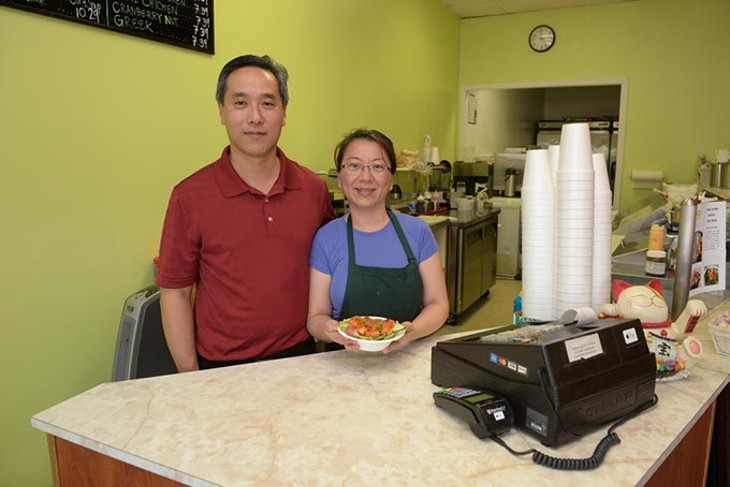 Owner Benny Fong said the question is not why Edmond’s The One Cafe is named what it is, but why not.

“Well, you want to be No. 1,” Fong said in a recent Oklahoma Gazette interview.

The small restaurant nestled between Sunlight Donuts and a military recruitment office at 122 E. 15th St. is certainly a contender for best of the best when it comes to range of selection.

The One Cafe has a colorful and diverse menu that includes sandwiches, salads, crêpes, pasta and poke sushi bowls.

Fong said the restaurant primarily serves the lunch crowd, but it also sells breakfast crêpes and smoothies all day.

Looking at the menu, one probably would not expect to find sports memorabilia hanging from the wall, yet small plaques dedicated to Dallas Cowboys football legends stand out in the otherwise clean and simple decor.

Fong said he does not watch the Cowboys as much as he used to, but he was a huge fan of the early “America’s team” squads of the late 1970s that featured players like running back Tony Dorsett and defensive lineman Ed “Too Tall” Jones.

Fong opened The One Cafe in September 2011 with co-owner wife Jessie. It is the first establishment he has owned, but he has worked in the food industry all his life, beginning as a boy working for his uncle’s Chinese restaurant in south Oklahoma City.

His uncle has since retired from the restaurant business.

Other than a desire to be the best, Fong said The One Cafe was so named as the answer for the common question, “Where are you going for lunch?”

With a menu this diverse, it is easy to make The One Cafe the answer to hungry patrons’ lunch questions for the whole week without any redundancy. 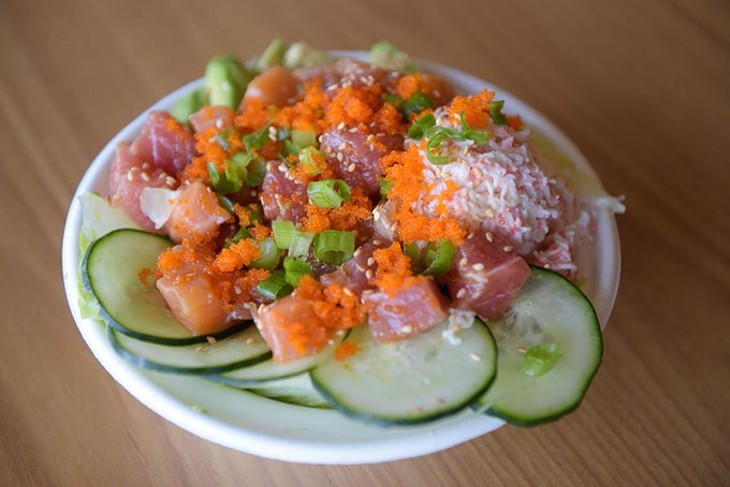 The eatery began mostly as a sandwich and salad shop and grew its menu from there.

Fong said its diverse selection is all tied together through its fresh and health-conscious philosophy.

Another goal is to offer menu items that are hard to find elsewhere.

“If you’ll notice, a lot of our sandwiches are kind of unique,” he said. “A lot of our items are unique and not available anywhere else. We want to be different.”

The One Cafe’s sandwiches are served on the customer’s choice of sourdough bread, wheat bread or crêpe wrap and include garlic aioli, lettuce, tomato, onion, pickle and a side of chips.

Crêpes are wonderful in that they can be used in a number of ways. The One Cafe offers breakfast, savory and dessert versions of its staple feature in addition to its role as a sandwich vessel.

There might be no better way to cap off a day than with The One Cafe’s Sweet Old Friend dessert crêpe ($5.49). Bananas, strawberries and Nutella are folded inside a delicately crisp crêpe and elegantly topped with whipped cream and chocolate sauce.

Introduced to the menu in early 2016, the Hawaiian traditional raw fish salad has quickly become one of the cafe’s best-selling options.

“If you like sushi, you will love it,” Fong said.

The One Cafe’s version of the poke bowl is always customizable and made fresh to order.

The process of assembling the meal resembles the assembly line model many guests will recognize from their favorite sub sandwich or fast-casual burrito stop.

First, customers select a base of either salad or white rice. On top of that is a layer of avocado ($1 extra), crabmeat ($1.50 extra), cucumbers or onions.

Choice of fish comes next. Fong said salmon is by far the most popular, but other options include scallops, tuna and spicy tuna.

A variety of other toppings and sauces can be added to finish it off.

Fong said The One Cafe thrives in striking a balance between traditional and less common menu items, like the poke bowls.

“A lot of our newer items are for the newer style — for the more progressive folks who want to try something a little different,” he said.

Fong and his wife are always thinking of new ways they can tinker with or add to the menu.

The poke was inspired by a trip Jessie took to Hawaii.

She noticed while many restaurants had the fish salads on their menus there, hardly anyone in Oklahoma City offered it.

Considering the popularity of raw fish in sushi form, Fong said he knew poke bowls would not be too much of a leap for his customers.

Being in Edmond, The One Cafe draws heavily from the college crowd with students from the University of Central Oklahoma and Oklahoma Christian University.

Fong said they also see a lot of business from young professionals who work nearby and visit during their lunch break.

Poke, which is found on few other menus in Central Oklahoma, has fans near and far.

“We have people come in from Del City, Norman, Yukon, Mustang,” Fong said. “They come up here.”

Its diverse menu keeps frequent guests engaged, but the flavors are what really keeps them coming back.

Bold taste comes from the Fongs’ insistence on freshness.

“Everything is made-to-order,” he said. “Nothing is premade.”

In a lunch market saturated with fatty, greasy or fried options, Fong  said his customers can leave his restaurant knowing everything they ate was made with care from wholesome ingredients.

Print headline: Food first; Edmond’s The One Cafe packs plenty of variety onto its fresh-to-order menu.