The Edmond Railyard development is nearly complete and the first restaurant has already opened. 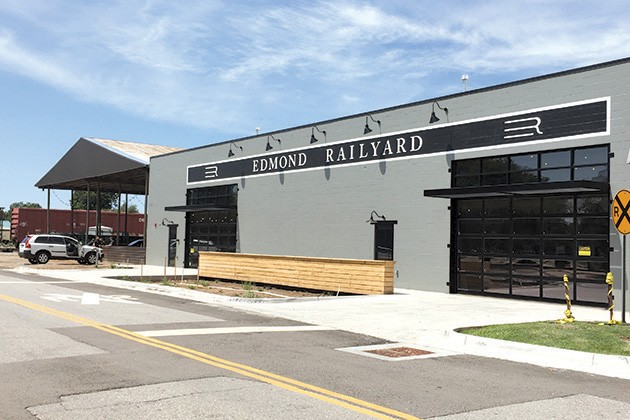 The first restaurant in Edmond Railyard opened last week, and five more are expected to open throughout the fall, along with a craft bar and office spaces.

A year and a half ago, Grant Group Commercial Real Estate Services bought the building, one of the town’s oldest and one that had served as a lumberyard for about a decade before. It was converted into Edmond Railyard, 23 W. First St., which now includes restaurant spaces, common areas and several seating options. It is about 80 percent completed.

“It was a 20,000 square-foot, wide-open building that we thought it would be cool if we could make into a destination. Edmond doesn’t have very many local restaurants. They have a lot of franchise stuff,” said Chris Anderson, Grant Group principal. “All the restaurants are local.”

The former lumberyard was converted to accommodate restaurants and reflect the group’s vision of a unique, open concept that can appeal to many.

“The lumberyard had four large overhead doors — two on the north side and two on the south side of the building. So we took two of those doors and made that, from north to south, a pedestrian walkway. So you can walk through the building, and all of the restaurants have street retail even though they’re within the building,” Anderson said. “It’s open-air, so we have those — I’m not cussing here — but those Big Ass Fans in there, circulating air, and we have heaters up on the ceilings. Our goal is to have those doors open 99 percent of the time so that it’s open-air and you don’t feel like you're inside of a building. It’s nice and bright and very open.”

Restaurants will open on their own schedule, but Anderson said they plan to host a grand opening event once everything is operational. Hott Wings, which opened last Thursday, is currently the only open restaurant.

“That is a concept from Eddie’s Bar & Grill in Edmond. He is known for his wings,” Anderson said. “He always gets voted best wings in OKC metro, so this is a concept that focuses mainly on his wings.” 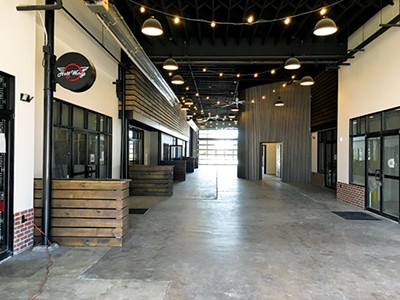 The other tenants are Oak City Pizza, formerly the Smoke N Oak Pizza food truck; Gogi Go, a Korean barbecue restaurant with a location in Midtown; Cities, a new concept from Capitals Ice Cream; and 1884, a craft bar by the owners of The Patriarch Craft Beer House & Lawn. There are two more restaurants that have not been officially announced.

“1884, which is the craft bar, and it’s the same ownership group as Patriarch that’s located in Edmond, this is a new concept for them. Patriarch focuses just on craft beer. And this location will also have the craft beer, but they’ll have a full bar with craft cocktails and wine as well,” Anderson said. “The two that haven’t announced are a hamburger restaurant and a taco restaurant.”

Edmond Railyard also includes two office spaces, one of which is already leased out. The other space has served as storage during construction but will be cleared out and ready to lease once it is completed.

So far, Anderson said they have gotten mostly positive responses from the community. He said people are excited to have a unique, family-friendly destination in Edmond.

“Oklahoma City just opened some concepts similar to this. So Edmond’s never seen anything like it. We see it as a family environment. My partners and I have kids. And one of the struggles you have is when you get in the car, where do you go to eat?” Anderson said. “The nice thing about Edmond Railyard is we have six different restaurants. So your family can go to one location. If the kids want pizza, they can grab pizza. If dad wants wings, he can get wings. If mom wants a hamburger, she can get a hamburger. And everybody can sit down together and eat.”

Each restaurant will have seating within its own section but there will also be common areas within the building. A 10,000 square-foot patio provides outdoor seating in front of a colorful mural by OKC artist Kristopher Kanaly.

“We partnered with the Edmond Visual Arts Committee on doing that mural that’s about 20 feet tall and is the whole west side of the building. You see it when you drive down First [Street],” Anderson said. “It’s a great addition to downtown Edmond. I see a lot of photos being taken there. And he’s hidden a bunch of things in his art to where you could even have a scavenger hunt. There’s a lot of little clues that tie to the community.”

Edmond is lacking in local restaurant concepts and patio space, Anderson said, so being able to provide both for the community was important.

“All the local, fun restaurants have focused more on Oklahoma City, so we’re finally getting some of those local concepts instead of the national chains,” he said. “It’s been very well-received. The family environment for Edmond has been very well-received. We’ll have an outdoor area for games — bean bag toss and connect four and Jenga. … We wanted to provide somewhere that families could go, but also you could go after work and have a drink with your friends. It can accommodate everybody.”