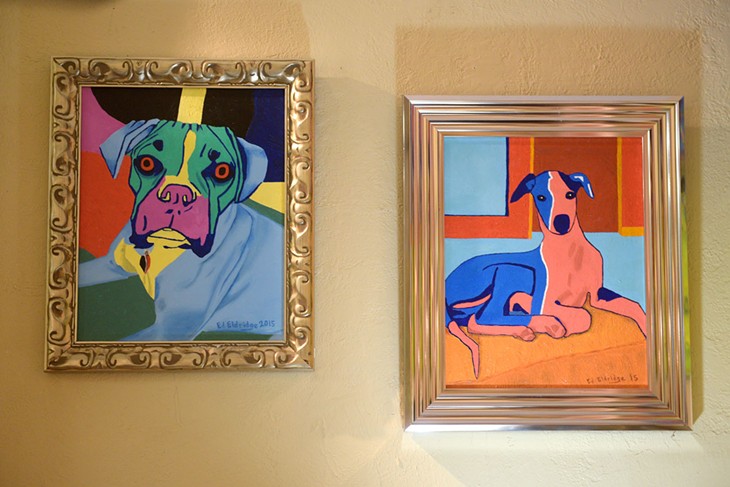 Edwin Eldridge’s wife Charlette told her husband to pace himself before he enrolled in college. After all, it had been nearly 50 years since he graduated high school.

Eldridge, 73, had other plans. The Oklahoma City painter and reuse sculptor was set on finishing his education.

The artist has become skilled at reimagining old computers, televisions and pieces of technology and equipment supposedly past their primes as large, robotic dragons, dinosaurs and dogs. The life-size metal and plastic configurations are not intended as a metaphor for their creator’s second life as a gallery artist, but one could make the connection.

After retiring from a career as a business owner, Eldridge sought a new challenge. One thing he’d always wanted to do was earn a degree.

Eldridge, who grew up in Bethany, graduated from high school in 1961 and later joined the Army. After his service, he contemplated going to college but didn’t have the money. He also was not very confident about returning to school because he was never the best student.

He completed his career without earning a degree, but the desire to work toward a college education never left him.

Eldridge lived with his wife near Stephenville, Texas, and decided to enroll at Tarleton State University. He thought about what his major should be — maybe history, math or biology. But Eldridge was retired; he needed something fun to do with his time. Charlette was an art teacher, and she suggested he try something creative.

Though his work is now displayed alongside other accomplished artists in the Paseo Arts District, Eldridge had never considered himself artistically inclined. But art and the desire to create suddenly seemed appealing. He admitted he might not have been born a Pablo Picasso, but he was willing to learn.

He studied, and his grades showed it. He remembered being stunned to see he had earned an A on an essay early on in his college career.

“That gave me a lot of confidence,” Eldridge said. “Back when I was young, I didn’t think I was smart enough to make really good grades, but I didn’t study.”

Eldridge found something to capture his imagination right away in his college career.

In his first semester at Tarleton, Eldridge’s 3-D design instructor showed everyone photos of reuse sculptures — life-size figures made using recycled materials and items labeled by most as junk.

The teacher assigned students to bring in their own junk and design a “self-representing” sculpture.

While most of his teenaged classmates brought in old pizza boxes and fast-food wrappers, Eldridge brought in a bunch of old desktop computers from a computer repair shop near his home. He built his first reuse sculpture — a robotic man — from those parts.

He moved on to other creations from there; a 9-foot-long dragon would later be displayed in the school’s science building and some of a whole family of dinosaurs are on display at Paseo Art Works, 3005 Paseo St.

Gallery owner Jolene Lloyd Forbes said she was immediately impressed with Eldridge’s work and knew it would be at home at Paseo Art Works, which she has run in its current location for the last five years.

“I want to show different forms of art in my gallery,” Forbes said. “Art is not all one thing. I’m an off-the-wall gallery.”

Eldridge graduated from Tarleton with honors in 2012 at age 69. He and his wife moved back to Oklahoma in September 2014.

The artist brought out a more than 6-foot-tall reuse tyrannosaurus on the day of his interview with Oklahoma Gazette at the gallery. The creature’s base skull was fashioned out of some old PC towers. Its wiry motherboard scales were scraps from various other electronic devices. This dinosaur, as well as many of Eldridge’s other creations, features a lumber armature under its industrial shell.

Eldridge keeps heavy tubs full of old computer parts and other scraps for his projects. He said part of the thrill for him is making something interesting out of old pieces of hardware that would otherwise sit in a landfill somewhere for many, many years.

Eldridge can’t commit to just one medium. When he isn’t making monsters out of old computers, Eldridge is a painter, often of dogs. His pieces are brightly colored and sometimes vaguely abstracted.

“I get tired of doing the same thing and want to move on to something different,” he said.

Still, his recycled pieces are part of what sets him apart. There’s an appropriate symmetry to the sculptor’s desktop-computer dinosaurs. In a museum, one might see a T. rex pieced together from old fossilized bones.

Eldridge does the same, but his old clunky PCs are fossils of another kind.

“You take a computer, and it dies,” he said. “Well now it’s garbage, so you throw it away. Then we start thinking about 300 million years ago when the dinosaurs went extinct. Well, these computers, they’ve now become extinct.”