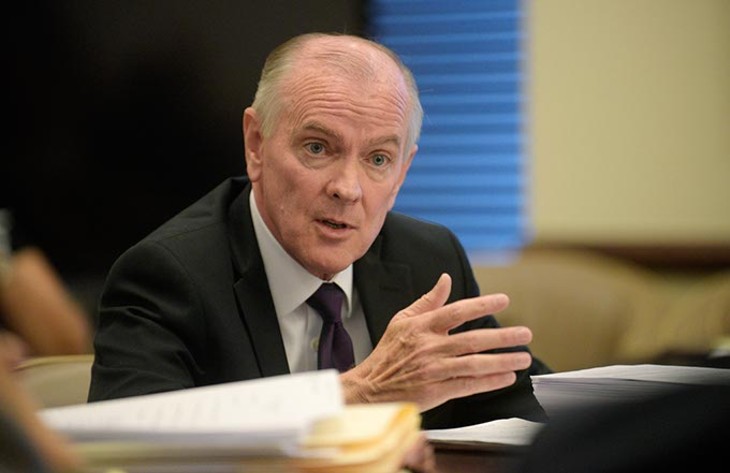 A half-century ago, the Supreme Court of the United States ruled that states must provide legal counsel to criminal defendants charged with serious crimes in federal and state courts.

The monumental ruling transformed America’s criminal justice system, ensuring that all criminal suspects — the guilty and the innocent — would be aided by defense attorneys in court.

The right to legal counsel is reserved for criminal cases only. In civil matters such as evictions, child protection issues, domestic abuse and home foreclosures, people must retain a lawyer by other means, represent themselves or not seek legal relief. Hiring and retaining an attorney can be costly, which makes it especially difficult for low-income individuals to access legal representation.

“Most Americans don’t realize there is no right to a lawyer in a civil case,” said Jim Sandman, president of national Legal Services Corporation (LSC), which distributes federal funds to two Oklahoma legal aid groups.

In cases such as homeowners in risk of foreclosure, parents with child custody issues in family court and domestic abuse victims obtaining protective orders in civil court, no lawyer is provided, Sandman said.

Annually, millions of federal dollars are distributed to the offices of Legal Aid Services of Oklahoma, Inc. and Oklahoma Indian Legal Services, Inc. to aid low-income Oklahomans with legal assistance. In 2015, the two nonprofits served a combined 18,264 people with attorneys closing 8,750 civil cases, according to LSC, established decades ago by the U.S. Congress to provide financial support for civil legal aid to poor Americans.

Behind the federal assurance to provide civil legal aid support is the reality that not everyone receives the assistance they need. In fact, LSC estimates at least 50 percent of poor Americans seeking help are turned away, often because of lack of resources.

Oklahoma is no exception. Two years ago, the Sooner State finished last in a national study on access to justice. The National Center for Access to Justice, a nonpartisan policy organization, compared the states based on civil legal aid lawyers’ policies to aid non-English speakers and people with disabilities in court and systems to support those representing themselves.

This year, Oklahoma fared better in the Justice Index. However, Oklahoma remains in the bottom 10 nationally for access to civil justice.

In a legal system built on the principle of equal justice under the law, legal cases going unresolved and undefended is troublesome to the state’s Supreme Court.

“Many low-income Oklahomans are unable to receive full representation on civil legal matters; inadequate funding and well-intentioned but uncoordinated efforts stand in the way of a fully integrated civil legal services delivery system,” a court order from March 13, 2014, states.

The 2014 order gave way to the creation of the Oklahoma Access to Justice Commission. The seven-member commission, which includes judges and attorneys, is responsible for producing a statewide strategic plan for delivering civil legal services to low-income Oklahomans. Additionally, the commission is charged with increasing resources and funding and reducing the barriers to the justice system.

“Our commission is working on a number of initiatives,” said attorney David Riggs, who serves as commission chair, in a press statement, “which we think will improve access to justice for needy Oklahoma citizens while at the same time helping to strengthen our economy by reducing homelessness and unemployment and by resolving family conflicts.”

Through partnerships with Legal Aid Services of Oklahoma, Inc. and the Oklahoma Bar Association, a statewide assessment on legal needs is expected to be released the fall, and a website — oklahoma.freelegalanswers.org — providing free legal information to low-income residents recently launched.

“We have a legal system; as great as it is, [it] was never built for people who don’t have a lawyer,” Sandman said. “It was built by lawyers for lawyers. It was constructed at every turn under the [assumption] that you have a lawyer.”

Sandman, who visited with Oklahoma Access to Justice Commission, advocates for courthouses becoming more user-friendly by allowing people better access to the court. Some legal matters are as simple as completing court forms and filing them with the proper clerk and don’t require an attorney. Sandman said that assistance programs operating in county courthouses go a long way to ensure legal access and matters get resolved.

Legal resource websites like the one recently launched in Oklahoma also reduce the number of people going without legal help. Volunteer lawyers answer questions about issues such as divorces, landlord disputes, wills and trusts by electronic communication.

The website matches the call of the Conference of Chief Justices and the Conference of State Court Administrators, who approved a 2015 resolution setting a goal of 100 percent access to effective assistance for essential civil legal needs.

“The idea is turn no one away with nothing,” Sandman said. “Every day, huge numbers of people are turned away from legal aid organizations with zero because there aren’t enough resources to help them.”

Sandman admits funding pressures from the federal level down to the local level make it difficult to grow legal aid programs.

The programs have an important message to share, helping a grandparent obtain guardianship of their grandchild, working with a veteran through bankruptcy court, filing a fair housing complaint to assist a family avoid eviction.

“It is very difficult to persuade people why they should care or give money to this,” Sandman said. “Until we tackle that problem — a basic communication problem — there is a limit on how much success we can achieve.”