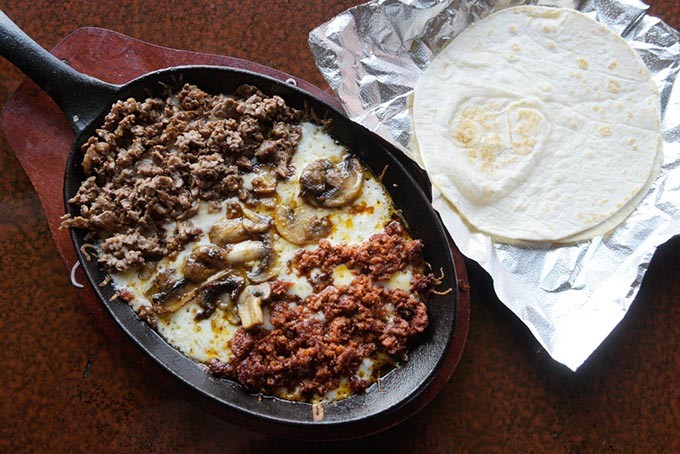 Emilio Granja feels he could write his own book, an autobiography detailing the twists, turns, sagas and struggles as a Mexican-American trying to find his way in life.

Whether it was working three jobs to earn just enough money to survive or a brief homeless stint in central Mexico, Granja managed to keep ascending.

“I have so many stories,” he said sitting in a booth in his new restaurant in The Paseo Arts District.

Granja first worked as a welder and then as an HVAC technician, and his latest success is as the owner of El Fogoncito, a quaint Mexican eatery specializing in tacos at 3020 N. Walker Ave., Suite A.

“You need to suffer in life to realize where you want to be. That’s the basis of my life,” said Granja, who opened El Fogoncito on Aug. 28. “Suffering is not suffering when you’re doing something to achieve what you want.”

A rectangular cubby occupies a small space near the drink station and is hidden to the 50-person capacity restaurant. That is where Granja, 35, keeps extra clothes for certain quick-change situations when he pulls double duty.

Up until a few weeks ago, Granja was a full-time HVAC technician. Now, he’s balancing the two.

Born in Chicago to a single mother, Granja lived stateside for 18 years before a move to San Luis Potosí, Mexico, jump-started his fondness of Latin American culture.

Any enjoyment was short-lived, as he found himself homeless for two weeks after his grandmother kicked him out.

Granja moved to Oklahoma City in his early 20s and worked as a welder for various companies until a work-related accident set him back.

Six years ago, Granja relocated to Austin, Texas, for a year of technical school. He regularly logged more than 16 hours day split between mornings in class, nights installing air conditioning units and shift work at Whataburger and Little Caesars in between. On the weekends, he and his wife sold tamales.

He moved back to OKC as an apartment complex supervisor. On the side, he spent the next four years slowly building a customer base that eventually turned into his own HVAC business.

Long hours led to a hungry stomach, and Granja often found himself craving Mexican food. He liked to eat it, so he thought, “Why not open up my own place?”

“I have tunnel vision. That’s what’s so bad about me,” he joked. “When I opened up this restaurant, I didn’t think what the downfall was.” 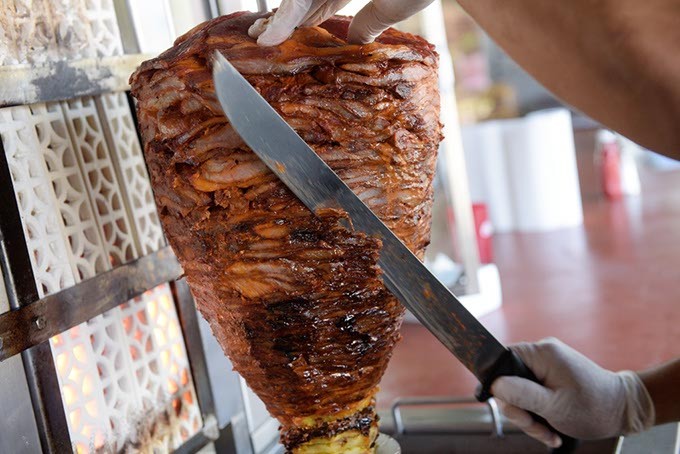 Aware of his surroundings in the Paseo, Granja knew creativity was needed for El Fogoncito, which means “little fire” in Spanish.

Murals line the inside walls of El Fogoncito to highlight central Mexico’s culture. A woman depicts the homey feel of the restaurant and a menu centered on traditional dishes while a Mayan warrior and a black train signify the history.

“I wanted something authentic,” Granja said. “Every plate you see here is what you would see at an authentic Mexican restaurant.”

A giant cone of sizzling pork sits at the end of the six-seat bar on a trompo and offers another illustration.

If anything, that is what El Fogoncito will be known for: al pastor tacos.

The portable street food goes by tacos de trompo in Mexico. A trompo is a popular Latin American spinning top toy shaped like a pear. Tacos al pastor receives its name from the way the pork is cooked, sliced thin, marinated for three days and then stacked on a vertical spit to cook rotisserie-style.

The idea stemmed from Granja’s visits to Guanajuato, which is about four hours from where his family lived in San Luis Potosí.

“That’s when I fell in love with al pastor,” he said. “I got sick off it because I ate so much of it.”

Al pastor is one of nine tacos, along with tortas, flautas and other plates, served up by Abisaid Samaniego, a partner and head cook at El Fogoncito. The menu includes traditional staples like barbacoa (slow-cooked beef) and carnitas (slow-roasted pork shoulder). They also make chorizo in-house for tacos and queso fundido, a melted cheese plate with chorizo and ground sirloin.

With the exception of tortilla chips, tortillas and French fries, everything from meats to sauces is prepared in-house.

Granja’s relationship with Samaniego dates back just 18 months when Granja scoured Facebook in search of a chef for his wife’s birthday party. Around the same time, he provided HVAC services to a developer that owned property in the Paseo.

Granja leased a portion of the building previously entirely devoted to a convenience store, erected a wall and raised the ceiling as part of an eight-month construction project.

As expected, he is learning as he goes. He laughed when noting that “everything is surprising,” estimating 75 or 80 percent is financial burden — Granja dished out $75,000 — and stress.

“Restaurants, you throw money into it and you hope it works out,” he said. “But my mental capacity is not meant for failure. Failure is not an option for me. I’ve never failed once in my lifetime, so I’m not failing for this.”

Granja is constantly thinking and trying to adapt. It took just three weeks for him to adjust the menu, dropping from three burgers to one, adding two enchilada dishes — verdes (green chile) and rojas (red chile) — and debuting a vegan soybean ceviche.

Taco prices are dropping from $3.75 to $3.25 based on feedback from customers, and Granja plans to institute a happy hour menu this month that will feature half-priced tacos and papas locas (loaded Mexican fries). Granja is also working on obtaining a liquor license.

“The community has been great. Everyone has been supporting us 100 percent,” he said. “The people leave with a happy face, and I’m happy with that.”