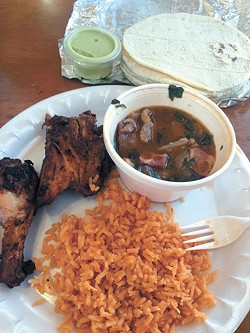 I grew up in the San Fernando Valley of southern California during the 1990s when the “valley girl” stereotype was pervasive in pop culture. To this day, I still insert “like” subconsciously into conversation.

But I appreciate the years I lived in Los Angeles because I met a lot of people from different cultures and it influenced my worldview for the better, but the ennui suffered by a teenager in LA is similar to that of many youths around the country. We were all pretty bored on Friday nights in high school, driving around with our friends, looking for something to do.

Quite often, this meant hanging out at a local fast food restaurant. I remember the time a friend ate a 10x10 at In-N-Out and finished it off with a milkshake.  In-N-Out is the California fast food franchise that has the biggest cult following, and for good reason, but it’s ultimately a great hamburger, which can be found lots of places, especially here in Oklahoma.

As the chain has expanded over the last decade, even into nearby Dallas, I found that my own personal mystique around the franchise has dissipated. Instead, the southern California chain that dances in my dreams is El Pollo Loco.

Started in Guasave, Mexico, in 1975 by Juan Francisco Ochoa, El Pollo Loco expanded across the border in 1980. With a focus on flame-grilled chicken, the drive-thru quickly attracted the attention of investors, and its American ownership has changed hands several times over the decades. There are over 430 El Pollo Loco locations, primarily in California and Arizona, but they’ve made their way into Texas.

It’s usually one of my parents’ first stops when they visit California these days, and they’ve even joked about bringing the franchise to Tennessee, where they now live, but the chain’s eastward expansion shuttered by 2012. 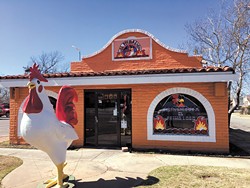 I made a few inquires to get the story of El Primo Loco over the last few weeks, but I’m still hazy on its history. However, its success is apparent, as there are three El Primo Loco locations along with a food truck.

As much as I enjoy the consistency of a well-run fast-food franchise, the corporate uniformity brings an inherent staleness with it, like standing water.

It was somewhat refreshing to find that the menu inside the Western Avenue El Primo Loco had made a few recent additions added with colored paper and markers.

Although steak and al pastor tacos are promoted with large photos on the menu, the chicken is the star at El Primo Loco, as evident by the 7-foot-tall fiberglass chicken welcoming guests through the front door.

I order the No. 1 combination, which is half a chicken that is butterflied and grilled on an open flame alongside onions. The plate is served with traditional yellow rice and stewed pinto beans. I added a medium horchata from those ubiquitous dispensers that serve horchata and other fruit-flavored drinks, and the total came to $13.

Since the Western Avenue location is a drive-thru, it had the meal ready to go upon order in a food warmer. The chicken is wrapped in heavy paper along with the grilled onions. I wasn’t exactly thrilled to see the food was prepared before order, but I realize that convenience is the name of the game for what appeared to be a two-person operation at lunchtime.

I would’ve preferred the chicken to be a few degrees warmer upon opening the paper, but it was by no means cold or even lukewarm. The chicken was expertly cut, with no excess fat on the breast, leg and wings. The rice was slightly mushy, if not unremarkable, but the pinto beans were interesting. I used the huge packet of corn tortillas to make tacos, which were accompanied by a green sauce that tasted like an avocado cream that was good but would benefit from a cilantro kick.

Stewed with tomatoes, onions, jalapeños and pork fat, they were much better than the average beans at a Mexican restaurant, but there weren’t many actual beans. There were large strips of pork skin floating in the soup, which added plenty of flavor, but I’m not going to eat it until it’s fried into chicharrón.

My second visit to an El Primo Loco was a takeout dinner trip to the 501 N. Rockwell Avenue location. Connected to a gas station, there is no drive-thru window, and the food is prepared to order.

I got the mole estilo poblano because I’ve never seen the luxurious mole sauce on a quick-service menu. Mole might be peak sauce. The numbers of ingredients used in the slow-simmered chile and cocoa-based sauce differs from chef to chef, but there is a depth of flavor not matched in many other sauces.

The combination plate included rice and beans, and I found the offering much better than the Western Avenue location. There was no pork skin floating in the beans, and it was plentiful. Even the rice was firmer and had more tomato flavor. I found the mole a great value for its price ($9) for a quarter chicken stewed in the complex sauce. While it wasn’t on the level of a high-end mole, it was tasty and convenient.

After a few trips to El Primo Loco, I will continue to support local business, but my El Pollo Loco craving hasn’t exactly been scratched. Perhaps the upcoming Pollo Campero Guatemalan chain at 1412 NW 23rd St. will satisfy my craving.

What works: The stewed pinto beans are spicy and savory.

What needs work: The green sauce could use cilantro.

Tip: The mole chicken is a good value.