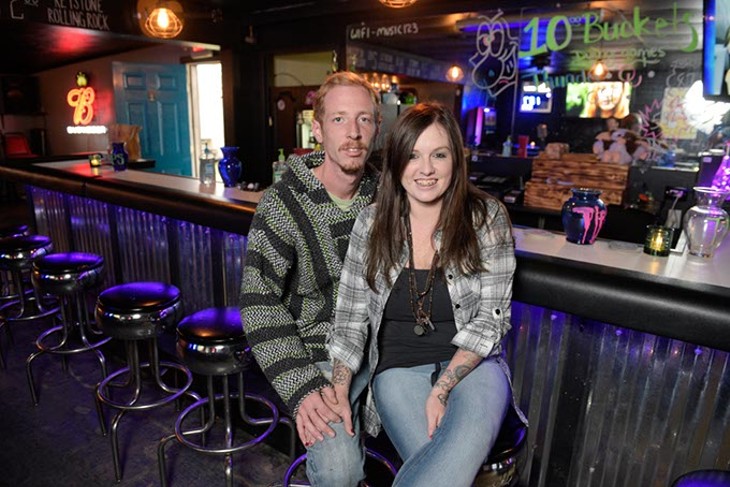 Charlie is a skeleton, and he has few bones to pick with Vices.

The full-scale Halloween decoration sits propped in a chair along a wall by the stage inside Vices Bar and Venue, 1701 E. Highway 66, in El Reno.

Sarah Ward, bartender and co-owner of the fledgling El Reno music venue alongside her husband Justin Ward, first put Charlie on display in October, not realizing he would eventually become a bar star.

“Everybody loved him so much that he just stayed there,” Sarah said. “People get up and dance with him and put cigarettes in his mouth.”

Vices opened its doors in September at the site of a former El Reno bar. The establishment is open 10 a.m.-2 a.m. Monday-Saturday and noon-2 a.m. Sunday.

The Wards opened the space as a way to bring live music to the town.

The business is also close to becoming the first non-private bar in El Reno licensed to serve liquor.

For Oklahoma City residents accustomed to modern nightlife in the city, such distinctions might seem commonplace. For the people of El Reno, especially the town’s young adults, it is a game changer.

“Stuff that way [in Oklahoma City] is a lot different than stuff this way,” Justin said. “We’re trying to bring it this way.”

The Wards met while working together at another local bar. Sarah has been a bartender in the city for the last seven years.

The two share a lifelong passion for music. Justin is a drummer in El Reno-based punk-rock band James Bond Dracula and has been in about a dozen other bands in his life.

Sarah said though the couple had long dreamed of helming their own music venue in the city, it wasn’t something they were actively seeking out before Justin was contacted by a friend who owns the building they now lease.

The Wards embraced the opportunity to make their dreams a reality. Sarah hopes the venue can help fuel a larger music movement in her hometown.

“It hasn’t always worked under other people,” she said, “so now we get to do it for ourselves.”

Vices has been open for less than three months, but Sarah said the feedback they’ve received has been very strong.

“They say it’s refreshing and something the younger crowd needed here in town,” she said.

A musician friend was conducting a soundcheck at Vices when he remarked that he felt like he was at 89th Street Collective in Oklahoma City.

“That was like the biggest compliment to me,” Sarah said. “It made my whole night. To be compared to that or more, that would definitely be way cool.”

Vices hosts primarily acoustic sets on Wednesday nights and full bands on Friday nights. Justin said they are open to booking acts from almost any genre.

Sarah has been working to book bands in El Reno for years, but establishing an official venue in the city has attracted a lot of attention.

“Usually, at my old jobs, I would have to hunt them down,” she said. “It’s a lot easier finding the talent.”

Justin said the El Reno music scene is alive and loaded with a surprising number of active musicians.

“There’s a lot more than you would think that play just out of El Reno,” he said. “There’s so many different types — country, acoustic indie, hardcore punk.”

Despite a local interest in music, El Reno musicians were previously located in an area with few local gigging options.

James Bond Dracula’s two other members are also from El Reno, but most of the band’s shows take place in Tulsa or Oklahoma City.

Though he now owns his own venue in the town, Justin does not think he will use it for his own gigs very often.

“I could come here and play, but I would burn myself out really easy,” he said.

Like any hometown anywhere, El Reno has its dissenters.

“Some say they hate it, but they don’t see the good things about it,” Justin said. “There’s a lot of good things in this town that people just take for granted.”

El Reno’s music-loving crowd can now count Vices as one of the good things. Sarah works hard to make sure Vices is a welcoming destination for everyone.

“People come in here and it’s all about the love and the good vibes — no fighting,” she said.

The Wards hope to be at the forefront of the effort to further cultivate El Reno’s music scene, which starts with establishing a local home base.

“People don’t have to drive 30 minutes [to Oklahoma City] just to have a good time and then risk their lives coming home,” Justin said.