Election gives you a choice. Or not. 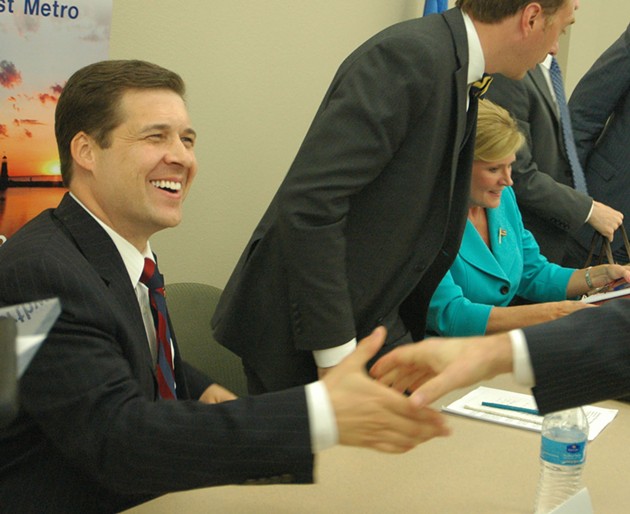 This year’s elections will give Oklahoma residents a choice.

Well, some of them at least.

Fifty percent of state House and Senate seats up for election in 2014 feature an uncontested candidate, which means the winners of half the seats have already been named by default.

The primary election is June 24, and the final day to register to vote was May 30.

Some races featuring multiple candidates will still be off limits to many voters. Nearly 15 percent of House and Senate races across the state include contests between candidates of the same political party. Due to Oklahoma’s closed primary system, voters registered in the other party, or as an independent, will have no say in primary elections that will decide the ultimate winner this month.

That means a Republican living in the Oklahoma City neighborhood of Crown Heights will have no input in who becomes the next representative of House District 88. A Democrat living in Piedmont will have to sit on his or her hands while Republicans decide the next senator from District 22.

Two bills filed this year in an effort to open primary elections both died in committee, as state leaders appear uninterested in changing the current closed system.

Oklahoma’s election structure prevents some registered voters from casting a ballot in deciding primary races, and uncontested candidates also leave some voters without a choice. However, the state’s self-imposed low voter turnout also keeps many out of the democratic process.

The state regularly ranks in the bottom in national turnout, and in 2012, Oklahoma was third to last with a 49.6 percent turnout rate. Although, Oklahoma ranked as high as 33rd in 2010 for the midterm elections, which come back around this November.

The low voter turnout is also found in specific age groups in Oklahoma, especially young adults. Oklahoma has the second lowest voter turnout rate for 18- to 29-year-olds at 27.1 percent, according to a 2012 U.S. Census report.

Oklahoma’s 5th Congressional district, which includes most of Oklahoma City, features 12 candidates vying to replace Rep. James Lankford, who is running for U.S. Senate. Nine of the 12 candidates are running in either the Democratic or Republican primaries this month.

Two Democrats are running in the primary, as Tom Guild, Leona Leonard and state Senator Al McAffrey vie to become the first Democrat to represent the 5th District, shows data from the Oklahoma Election Board.

The winners of the two primaries will face Independents Buddy Ray, Tom Boggs and Robert Murphy in the November general election.

At least six in 10 voters over the past decade in the 5th district have cast a ballot for the Republican candidate in the general election, meaning the winner of the Republican primary on June 24 will likely take the seat in November.

Following the theme of the national party, the six Republican candidates are campaigning on platforms of small government and fighting back against President Barack Obama.

“We have a Congress that is failing to do its job to oversee the executive branch and make sure it doesn’t abuse its power,” said Jolley, who currently serves in the state Senate.

While the candidates are opposed to Obama’s policies, most have also been critical of their own party and the U.S. Congress, which has a Republican majority.

“Executive orders have been abused by the executive branch,” Jett said.

During a recent candidate forum at Francis Tuttle Technology Center, all five of the candidates present — Turner was absent — said they would not have voted to raise the debt ceiling, and none said they would vote for Rep. John Boehner to remain as Speaker of the House, currently the highest political position held by a Republican.

Douglas, Turner and Jolley lead the race, according to a recent News9 poll that showed no clear frontrunner.