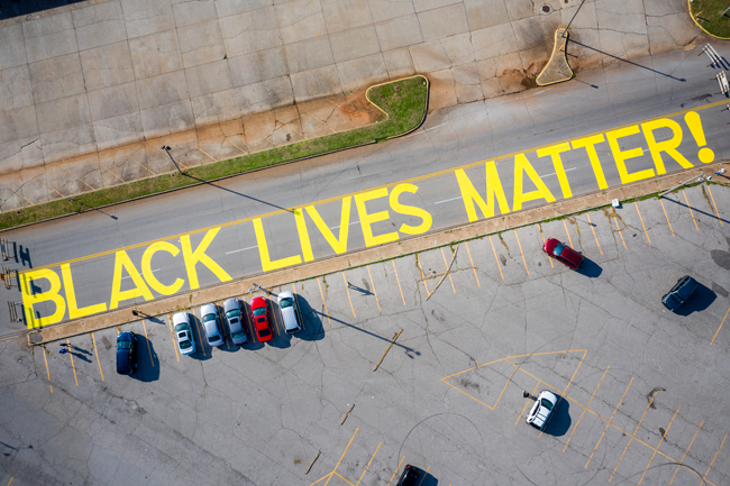 As Black Lives Matter Oklahoma City enters its fifth year as an official chapter, there is still much work to be done.

While the groundwork was laid in 2015, the Oklahoma City chapter became recognized officially the following year.

Executive director Rev. T. Sheri Dickerson said she was approached by one of the founders, Patrisse Khan-Cullors, about forming the chapter due to her past activism and advocacy.

“Oklahoma is very high on the list, sometimes number one, on the list of officer-involved fatalities,” Dickerson said, “so surely there needs to be a chapter that is giving voice and amplifying the voices of Black lives and challenging the system of police brutality, white supremacy, racism, all the other –isms.”

Demand for body-worn camera footage of Scott’s death resulted in its release last month. But for BLM OKC, Black lives aren’t the only ones that matter in their campaign for justice.

A section of the mission statement on BLM OKC’s website further details its scope of activism: “We are expansive. We are a collective of liberators who believe in an inclusive and spacious movement. We also believe that in order to win and bring as many people with us along the way, we must ensure we are building a movement that brings all of us to the front. We affirm the lives of Black queer and trans folks, disabled folks, undocumented folks, folks with records, women, men, and all Black lives along the gender spectrum. Our network centers those who have been marginalized within Black liberation movement. We are intersectional. People do not live one-dimensional lives, and our struggle crosses multiple dimensions. We ally with other oppressed people and find common cause with their struggles.”

Sanchez was shot and killed by Oklahoma City police on his porch in southwest OKC. BLM OKC has also rallied around Luis Rodriguez, who died in police custody outside the Warren movie theater in Moore in 2014.

Another incident that preceded its formation was the arrest of Oklahoma City police officer Daniel Holtzclaw, who was convicted of raping numerous Black women in northeast Oklahoma City. The U.S. Supreme Court recently declined to hear his appeal, so he will serve the entirety of his 263-year sentence.

“I was there as a support to the OKC Artists for Justice group. Several of us that ended up forming the BLM OKC chapter were also part of that,” Dickerson said. “One of the reasons why we didn’t, because we were getting ready to when all of that happened, is we don’t co-opt the work. We don’t appropriate the work. Those are Black women, and we’re Black women that have founded this, and so that’s not what we do to our sisters. And there’s so much work that needs to be done. It’s not about title or affiliation. It was about protecting and fighting for justice, and so that’s still the goal.”

Aside from initially advocating for victims of police violence and demanding racial equality in policing policies, BLM OKC has widened its scope of action.

“That’s a small fraction of what BLM OKC has evolved into. … We started our youth league; young people’s voices deserve to be amplified. They’re part of the demographic to where they said, ‘We’re getting killed too,’” Dickerson said. “We also have an interfaith league, or arm of BLM OKC. Myself being clergy, Reverend Jesse Jackson being part of the organization being clergy, very clued up with clergy, and so we understand how voices of faith should be. It’s obligatory for us to speak out against injustice. But we’re all black, and our lives matter as well. And then we have the arm of the LGBTQIA because often, Black trans persons basically are trained to, are further marginalized or even erased, and their lives are being, just they’re being slaughtered at unfortunately alarming rates. And we need to stand for them because we say all Black lives matter.”

That the so-called “Stonewall riots” erupted in New York City in 1969 after a Black trans woman, Marsha P. Johnson, was attacked by police is of historical note here.

“I’m a queer person, and so especially in this month, history is important, but this is what we still see today,” Dickerson said. “There still seems to sometimes be very intentional and deliberate attempts to mute or dilute the effectiveness of Black women who have been the foundation and core of so many movements, and still there’s that patriarchal pull that really starts to pull at the hearts of Black women who are literally all about doing the work, protecting the community, uplifting the community, educating. Many of us now, we just want to survive and for our children to survive.”

The women-led core of the leadership is unique to the BLM OKC chapter, she said.

“We have now expanded so that we have some diversity and introspection. But for the most part, from the beginning, women were the majority of the leadership team, and we have black men who were very supportive of that particular structure, and that is still the case,” Dickerson said. 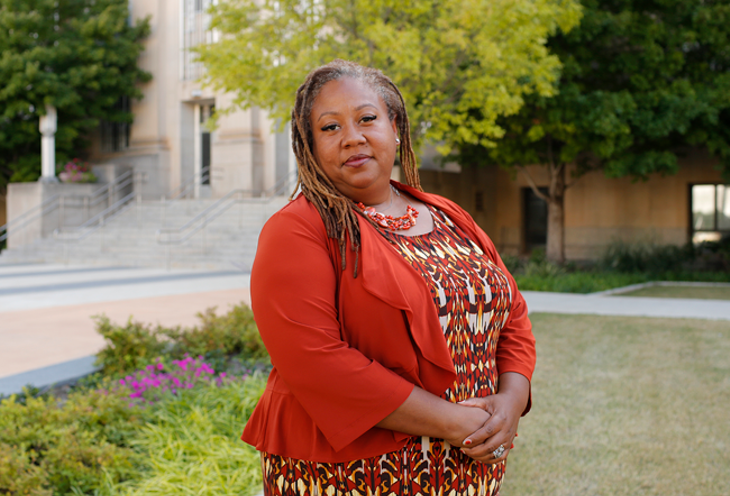 The death of George Floyd immortalized in cell phone camera footage that showed Minneapolis police officer Derek Chauvin fatally kneeling with a knee on his neck for 8 minutes and 46 seconds set up a new wave of protests and property damage that the country is still feeling the effects of more than a month later.

Despite being in the midst of the COVID-19 epidemic, thousands of Oklahomans took to the streets, including the Black Lives Matter protest that began at NE 36th Street and Kelley Avenue and traveled both to the capitol and police headquarters and the Oklahoma County jail.

“I wanted to make sure that families in Oklahoma who have lost their loved ones to police brutality didn’t feel disrespected or forgotten or abandoned. And so I wanted to make sure that our messaging was about, ‘We see you. We hear you. We support you. And we’re going to continue fighting for justice,’” Dickerson said. “We haven’t been quiet, and we’re going to continue to amplify and push for policy change, legislative change. You’d like to be able to say community or humanitarian change, but I don’t understand why we have to literally push within society simply to be acknowledged that our lives matter.”

BLM OKC does not endorse individual political candidates, though it does strongly encourage voting.

“Now we can certainly amplify and encourage everyone to participate in voting and being part of the process of choosing and electing representation that is going to be reflective of our own community,” Dickerson said. “And we know that this won’t happen, but every elected official and every person within a position of power that can use their privilege as leverage should be supporting and uplifting the movement for Black lives because Black lives matter, and they should be aware of why this movement even has to exist and want to and desire to bring change.”

She took great offense to President Donald Trump’s attempt to hold a rally on Juneteenth in Tulsa, blocks away from the historic site of the Tulsa race massacre that occurred 99 years ago.

“He is a feckless jackal in my eyesight, and all of his actions are repulsive and he is repugnant and very deliberate, intentional and unapologetic in glorifying and broadening his base and upholding the systems of white supremacy,” Dickerson said. “It really gives me pause when we can get to a point to where you can come to a place that is sacred because of the atrocities that have happened. The second atrocity because it happened on stolen land, so the amount of disrespect. And then to come out with that very milquetoast response, ‘My few black friends.’ When you know how many Black friends you have, that indicates that you are racist as fuck.”

While she has been pleased to see the push to pull down Confederate statues and the banning of Confederate flags, her voice rises when discussing Republican state Sen. Casey Murdock’s plan to bring those statues to Oklahoma.

“Oh my goodness. I’ve got some words for him because surely your daddy has taught you better than that. You have invited all the Confederate statues when Oklahoma wasn’t even part of the Confederacy. And to want to invite something that is going to inflict such pain and trauma to an already-bleeding and overtly undeserved, traumatized demographic?” Dickerson said. “Shame on them for not being aware. It’s so offensive and absurd, and it is very indicative of the regime that currently resides at 1600 N. Black Lives Matter Avenue in Washington, D.C. I do take a small amount of pleasure in being able to designate his new address.”

After the Young Peoples March for Justice and the street mural, BLM OKC is taking a step back from public events in light of the record number of COVID-19 cases now being recorded in the state. Instead, it will focus on socially distant goals.

“The in-person activities or protests we were planning, we’ve made the collective decision to change those, to either reschedule or just not have them because we want to protect our family because we see everyone as family,” Dickerson said. “And so we are going to be having some virtual protests. We want to have some create-a-thons to keep the momentum about BLM and BLM OKC in the hearts and minds of the people who are pushing for justice for the many, many families that have been affected.”