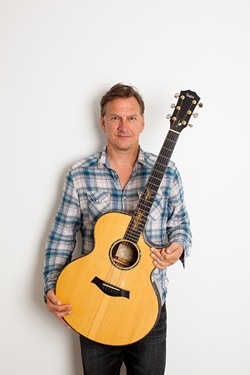 The art of songwriting can get lost in today’s pop music landscape. A song’s message often takes a back seat to synthesized instrumentation and slick production, with the artist hoping audiences grasp onto a simple chorus or hook.

Not so with folk musician Ellis Paul, who stakes his reputation on his message. With 19 albums under his belt, Paul proves that lyrics and straightforward songwriting are still vitally important.

The Maine native discovered his calling at Boston College after a running injury sidelined him and he picked up a guitar. He also was introduced to folk music during that time.

“There was this revival on commercial radio at the time of classic rock,” said Paul, 51. “It was the mid-’80s, and suddenly there were stations in Boston playing old Neil Young songs, Joni Mitchell songs and Bob Dylan songs, and that’s what turned me on to it.”

Paul said it the beauty in the genre’s minimalism drew him to it.

“There’s this sort of an integrity when it’s a voice and a guitar singing together,” he said. “There’s this humility to it, and there is a sincerity to it. The effect of the lyrics is more direct. I just think it’s a really great way to communicate with music.”

Paul crisscrossed the United States during his many years of touring. He picked up on how regions uniquely approach and create folk music.

“Every region has a different flavor. The thing that’s happening in Oklahoma is really great right now, because there is a lot of emerging artists. It’s got more of an Americana, sort of an alternative country feel,” Paul said. “Boston is more singer-songwriter. [It is] more lyric-driven, a little more heady. Atlanta tends to be a little more Southern rock, a little more heart-heavy, a little more sexy. LA is a little more poppy. Texas is almost a region unto itself.”

Paul is a product of what’s often called Boston-style songwriting. The singer-songwriter folk style developed out of the intimate listening rooms found in the Boston college music scene. 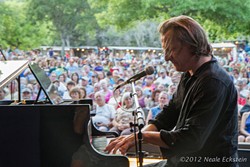 “The Boston thing was the fact that all of these venues existed where it was pin-drop quiet,” Paul said. “It wasn’t a lot of these songwriters coming out of bars out of Oklahoma or out of Atlanta, where you have competing noise in the bathroom or the sports television on.”

Paul performs May 22 at The Blue Door, 2805 N. McKinley Ave., a listening room he has played multiple times since 1994. He adores the venue’s audiences.

“The great thing about The Blue Door is that it’s a listening room but there’s still drinking. They’re saying shit between songs and it’s an Oklahoma crowd,” he said. “They respect the song, but they make a lot of noise in between; they’re like a Greek chorus. They’re reacting in time with the song and reacting to the song and sometimes shout shit out in the middle of the song. People [are] there to have a good time and interact with you.”

Paul said the venue is a key stop on his tours.

“It doesn’t look like it, but in a lot of ways, it’s the Taj Mahal of Oklahoma music,” he said. “It’s a landmark historical site for the culture of music that comes out of Oklahoma. I’m always proud to play that place.”

Print headline: State jewel, Folk musician Ellis Paul performs May 22 at The Blue Door, one of his favorite venues.