“There is only one response I get when I tell people I ride the bus, which is, ‘I wish I could ride the bus.’ They always have an excuse.” 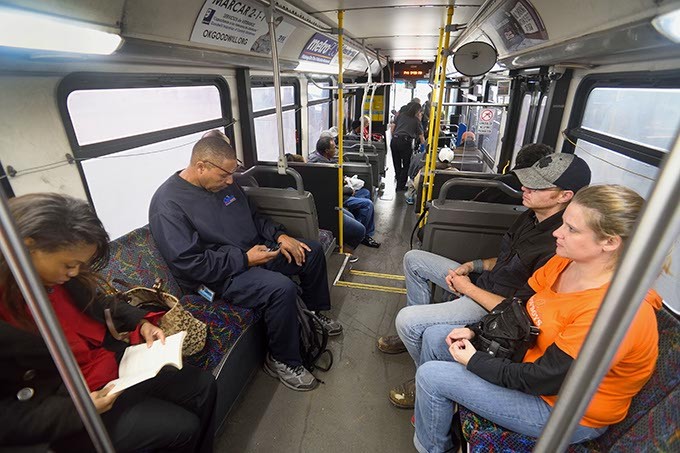 Stephen Morrow couldn’t recall the exact date that marked the last time he got behind the wheel and drove himself to work.

Around seven years ago, he decided to check out Oklahoma City’s Embark public transit system. The educator boarded a bus from downtown to S. May Avenue, which stopped at Oklahoma City Community College (OCCC).

It took only a week to hook the English and philosophy professor.

He traded fighting traffic and finding parking with catching up on reading and preparing for upcoming lectures.

He admits public transit takes longer, but he views a bus as an extension of his office, where he accomplishes about an hour and a half of work each day.

“The reason I would never go back to driving is I can read and read,” Morrow said when holding a book and iPad during a Nov. 19 ride. “That’s my texting. I read at least 40 more book titles a year.”

Before Morrow opened his book, he hit the home button of his iPad. His finger tapped the Internet browser, which prompted the Embark website to open.

“One less thing I have to do at home,” Morrow said as the sent message notification roared.

When it comes to service, there have been few new amenities offered since buses began running in American cities during the 1920s. The goal of bus service is to collect a fare and provide a ride, and it hasn’t needed much adjustment except for extending routes and expanding service hours.

As travelers evolve and transit companies seek to attract and keep untraditional riders, favor for adding on-bus amenities is gaining speed, and that speed centers on Wi-Fi.

In October, Oklahoma City’s Embark, which oversees the city’s bus system, parking and ferry service, joined the growing list of transit agencies outfitting buses with Wi-Fi. It began in the fall of 2014 with four buses but is now featured on all 59 buses. Wi-Fi allows Embark passengers to check their email, surf the Web or send text messages without tapping into data usage plans.

Director Jason Ferbrache said Central Oklahoma Transportation and Parking Authority Trustees followed national trends when they approved an agreement with Satellite and Wireless to bring Wi-Fi to buses in July.

“This is the way transit systems are evolving, and we wanted to stay ahead,” Ferbrache said. “As we know, most of us are connected to our mobile devices, and Wi-Fi is one of those things that people expect you to have.”

The addition of Wi-Fi is one of the many recent enhancements of Oklahoma City’s bus service. In April 2014, the transit system was renamed Embark, which led to a new website and bus signs. Beyond a new marketing strategy, Embark reconfigured many routes, increased bus frequency and rolled out night service on specific routes.

For fiscal year 2014-15, Embark recorded a 9.5 percent increase in ridership and averaged near 12,000 passenger trips per day. There were more than 3 million passenger trips on the fixed routes during the period between July 1, 2014, and June 30, 2015, before installing Wi-Fi hotspots.

“We’ve seen significant growth, and we predict that Wi-Fi will be another amenity that allows for the growth to continue,” Ferbrache said. “We are really excited to look back to see where our ridership is at a year from now.”

Embark reports other technology enhancements, such as automatic vehicle locator systems, on the buses. Embark employees can track bus locations and update riders on arrival times by posting real-time data to the website. Travelers can text 414-11 with the message “Embark” followed by the stop identification and the route numbers and Embark responds in a text message with the next two bus arrival times.

Additionally, the transit system is welcoming Web developers to access their information through open source data. This opportunity encourages developers to use the information, under clear legal conditions, to create transit apps for customers. Already, Google Maps and Moovit have accessed Embark’s information.

“If there are different apps, there are more options and choices for our customers to be able to maximize the Embark system through technology,” Ferbrache said of the transit company’s support toward open source.

Embark’s service enhancements aid OCCC’s Morrow when explaining to co-workers, friends and students the benefits of riding Embark. He often talks about his experiences and ride commitment in efforts to combat climate change.

“I’d love to see a change,” Morrow responded when asked about increased ridership. “There is only one response I get when I tell people I ride the bus, which is, ‘I wish I could ride the bus.’ They always have an excuse.”

Could Wi-Fi attract new riders to Embark? Morrow believes it might; however, he said there are other benefits, like financial savings, that could keep riders returning, too.

Riding a bus offers an experience similar to a coffee shop where people strike up conversations. Morrow helps connect fellow riders to OCCC programs and services.

As the route 012 bus traveled north on S. Agnew Avenue, Morrow looked out the window and pointed to Cattlemen’s Steakhouse in Stockyards City.

“When I ride in the morning, it’s dark and all you can see is the light from the restaurant as people eat their breakfast around the counter,” Morrow said. “It’s a little piece of Americana. That’s something some people will never see.”