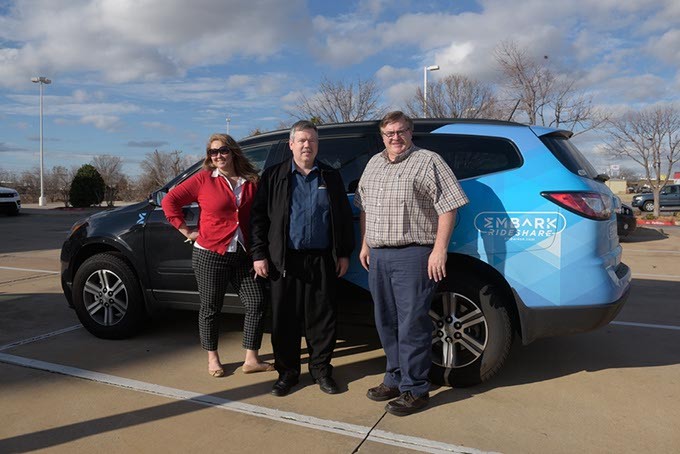 Not long ago, Edmond resident Lori Rasmussen was one of tens of thousands of metro commuters fighting traffic along Interstate 235/Broadway Extension. At 90 minutes per day, the drive added the equivalent of almost an entire workday to each workweek as she lost more of her paycheck to the cumulative costs of car wear and tear and fuel.

Each day, her stress level spiked as she hit bumper-to-bumper traffic to and from Boeing’s south Oklahoma City facility, where she works as a communications specialist.

Last fall, when the aerospace company surveyed its 2,600 Oklahoma City employees about transit options, Rasmussen conveyed her interest in carpooling.

In November, Rasmussen and a handful of her coworkers became the first to join a new rideshare program through Embark, Oklahoma City’s public transportation system.

“When I learned about sharing an SUV with a group of coworkers, I took a close look,” said Rasmussen, who said she is on track to save $5,000 a year while using Embark Rideshare. “We share the driving, and it is certainly more relaxing than driving on my own. There was one commute where I sat and paid all my bills on my mobile device. When I was home, I was able to enjoy time with my family and not worry about that added stress of one more chore.”

Each weekday morning, Rasmussen and four rideshare members meet at an Edmond Dunkin’ Donuts, where a Chevrolet Traverse, brightly painted with the words Embark Rideshare, idles at the curb. At 6 a.m., they head to work.

In Oklahoma City, where the right to drive is coveted almost as much as free speech, the Boeing employees are perhaps a rare breed.

While new to Oklahoma City, ridesharing or vanpooling services have cropped up in major metros over the past decade. Four years ago in Houston, a city spread over 599.6 square miles, its vanpool program served more than 700 routes and was ranked the second-largest vanpool program by passenger trips in the nation, according to the Texas A&M Transportation Institute.

Oklahoma City transportation leaders were encouraged by reports from Houston and elsewhere. Locally, most residents drive to work by themselves, and those empty seats represent a huge inefficiency in the transportation system while driving up greenhouse gas emissions. Changing attitudes toward car ownership and public transit, followed by the rise in the sharing economy, which is used to describe economic and social activity involving online transactions, presented a unique opportunity for Embark to establish its rideshare program.

“It allows us to serve areas and at times where we might not be able to have a bus scheduled,” said Embark public information officer Michael Scroggins. “It diversifies our transit options and introduces new people to transit. And it gets that single-occupant vehicle off the road.”

Like most services these days, users communicate with each other by app to determine things like departure times, drivers, vacations and sick days.

Participants say they have more freedom and flexibility than they would if they utilized traditional public transit like bus service, Nolen said.

Embark Rideshare requires the work commute to begin or end in Oklahoma City limits. vRide is reaching out to major employers to educate them about the service, but Nolen said employees also can inquire about it via the official website at embarkok.com/learn/services/rideshare.

“You only need four people to start a group,” said Nolen, who said rideshare vehicle options include SUVs and large passenger vans. “That group can be work friends or acquaintances who live near each other, or maybe it’s a group that all works downtown. It doesn’t necessarily need to be the same employer.”

Honored as the North American Outstanding Public Transit System of the Year in 2016 by American Public Transportation Association, Embark leaders said the rideshare program is another method in building a stronger transit system that meets community needs, Scroggins said.

“It shows that public transit can be available and accessible to anyone,” Scroggins said. “That’s our goal: to provide access to all in public transit and prove public transit benefits us all; whether we use every mode is up to us. We are benefiting from public transit in some form or fashion.”

The commute to and from Boeing, located in Oklahoma City’s southeast quadrant near Tinker Air Force Base, is often quiet as Rasmussen and her coworkers answer emails, join company conference calls or complete personal tasks.

As the SUV pulls into its preferred parking space in the Boeing lot, curious onlookers often ask about the vehicle and ridesharing, she said. Rasmussen and others cite financial and environmental benefits as well as wear and tear saved on their personal vehicles as reasons to check out the service.

Over the past three months, the coworkers have built camaraderie while sharing the 23-mile commute, another benefit not to be overlooked, Rasmussen said.

“It gave me a really exciting opportunity to get to know my coworkers better and find out some of the different functions and jobs we have here in Oklahoma City,” she said. “Sometimes we get out our devices and continue to respond to emails or make phone calls. Other times, we socialize and visit. We hear stories about work situations and we will collaborate on ideas or offer solutions.”