This rapper isn’t after fame or fortune. Instead, he wants to demolish negative stereotypes and uplift a generation. 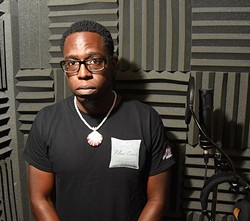 Lamar “L-Smooth” Mensah felt like people were sleeping on his potential as an emcee. So he wrote them a wake-up call.

“Pillow Cases,” out now, is the first single from L-Smooth’s album Era of an Emcee, due out later this summer. The song features the Midwest City native throwing out rhyme after rhyme that has convinced listeners to hold off on the snooze button so far.

With assistance from the soulful Shylah Vaughn on the chorus, “Pillow Cases” has made noise on indie charts, including Digital Radio Tracker’s National Airplay Top 50 and Top 60 Independent charts.

“Plateau,” the album’s second single, is set for a June 2 release. And while L-Smooth wants people to hear and appreciate his art, he’s not too worried about writing hits.

He said his goal is to create timeless music; he never thought that “Pillow Cases” or any other tune might see radio success.

The path leading L-Smooth into music was one that grew organically over time. He grew up listening to many different genres of music, not just hip-hop. He also freestyled for friends, who, in turn, pushed him to take his talents even further.

“It’s like therapy a lot of times, too,” he said. “You can get a lot off your chest through song.”

Although he’s a self-described hip-hop purist, L-Smooth refuses to perpetuate the negative stereotypes that are often portrayed in mainstream media. He realizes that some of his fans are young and impressionable, so instead, he follows the genre’s roots to its earliest days in New York, when raps were more about perseverance, family, independence, urban survival and overcoming social and economic adversity.

“People have different upbringings, but at the end of the day, I want to put a positive message out there that you can be a successful person without selling drugs,” he said. “You can make good music without putting profanity in it.”

Being a father also inspires him to keep his message on the up-and-up.

His son Latrell, 12, also freestyle raps. In a February show, Latrell took the stage during a “pass the mic” session — to the surprise of his father — and dropped rhymes for his first time in front of an audience.

“Honestly, it brought a tear to my eye,” L-Smooth said, “because that wasn’t something where I told him to go up there.”

L-Smooth is part of a growing number of local emcees who work hard to create and share positive messages with the community’s younger generation. He said the local hip-hop scene is healthy and it gains momentum and legitimacy as artists push boundaries and tear down negative stereotypes. 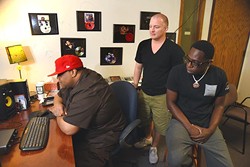 He believes that slowly but certainly, the scene is waking up and coming together around messages of urban unity and individual independence.

“All we really want is a chance,” he said. “Come out to a show. Some people have a stereotype that people in Oklahoma can’t rap, but just give us a chance and let us show you what we can do.”

Print headline: Smooth operator, This rapper isn’t after fame or fortune. Instead, he wants  to demolish negative stereotypes and uplift a generation.