For the last five years, a strong energy sector has allowed Oklahoma’s economy to grow faster than the nation’s as a whole. 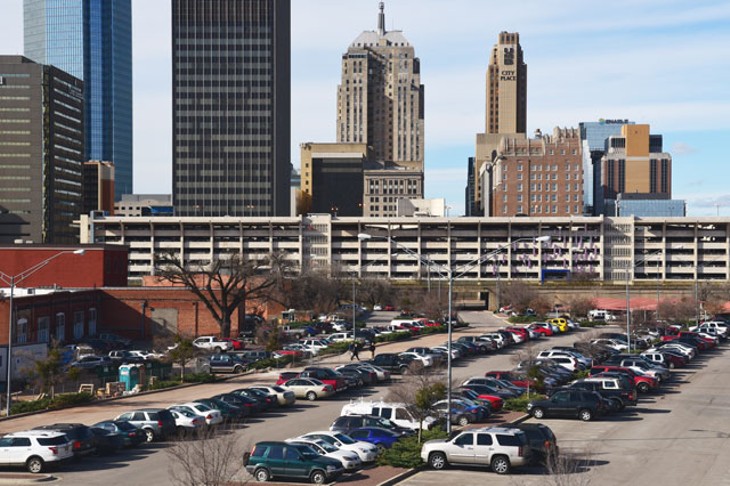 For the last five years, a strong energy sector has allowed Oklahoma’s economy to grow faster than the nation’s as a whole.

Still — you can ask any mechanic — engines need oil and gas.

“We’ve been over-performing the nation because of the energy sector,” said Dan Rickman, OSU regents professor of economics. “This is going to switch, but because of (the national economy), we’re still going to grow.”

Rickman released an annual revenue and job-growth prediction for Oklahoma’s economy, which is factored into state revenue estimates made by Gov. Mary Fallin’s budget department, a division within the Office of Management and Enterprise Services.

OMES — or “oh-mess,” as the robust agency is colloquially called — is headed by Preston Doerflinger, a former Tulsa city auditor. He’s also Fallin’s former Secretary of Finance and Revenue.

Doerflinger presented budget and economic prognostications garnered from contracted economists like Rickman to the Oklahoma Board of Equalization last month.

“Despite some of the nuances with the budget, our economy remains strong (in Oklahoma),” Doerflinger told the board, whose members include Fallin, five elected state officials and the president of the Board of Agriculture. “If we do have some energy sector shrinkage, our number could drop a little bit.”

Such shrinkage is feared by a wide range of Oklahomans, from families supported by oil-field workers or energy company cubicle-dwellers to the four dozen or so elected officials and bureaucrats who attended the meeting.

“If we really knew (what the price of oil would do), we wouldn’t be here,” Rickman said.

Throughout the meeting, board members like State Auditor Gary Jones asked Doerflinger and others whether the state revenue projections being presented were taking the sagging oil prices into account. Doerflinger said they were. By the day’s end, however, crude prices dropped to $54 per barrel.

“I think everybody is always concerned about the price of oil because energy certainly has a significant presence here,” said Greater Oklahoma City Chamber of Commerce President and CEO Roy Williams. “Having said that, the flip side of the coin is as long as it doesn’t impact employment here, now consumers have different choices in how they spend money that they’re saving at the gas pump. As a result, if you look at the city’s sales tax numbers, they’re pretty strong.”

The impact on employment numbers might be the $54 question. Rickman’s analysis focuses on job growth, and he anticipates about 30,000 new jobs added in Oklahoma this year, especially in areas of administrative and support services, durable goods manufacturing, health services, hospitality and food services and construction.

The energy sector was not highlighted as a source of 2015 job growth.

As for OKC, Williams sees many positive developments in motion and on the horizon, including the General Electric Oil and Gas Technology Center’s construction and 13 new hangars planned for Tinker Air Force Base.

“Barring something that we have no control of, we anticipate that 2015 is going to be a good year,” Williams said. “Diversifying an economy is a major long-term strategy.”

He said the main components driving our economy are aviation, energy, bioscience, healthcare and information technology.

However, Williams and Rickman both see challenges for the state, and the Board of Equalization heard numbers and took action at its meeting that some fear will impede the state’s growth and stability.

A 1-percent increase of estimated General Revenue Fund for Fiscal Year 2016 receipts set off a tax cut “trigger” that was passed into law last legislative session. As a result, the Board of Equalization voted to cut Oklahoma’s top personal income tax rate from 5.25 percent to 5 percent.

“Under this tax cut, 41 percent of Oklahomans will not see any tax reduction, and the average tax cut for middle-income families will be just $30,” Blatt’s statement read.

Balancing desires for lower taxes and the needs for critical state services is a challenge, Rickman said. “Really, economists universally agree that education and infrastructure are critical for private sector growth,” he said. “The question is, ‘What’s adequate support?’”

Williams has long been concerned with both education and infrastructure.

“That’s going to create some interesting decisions as to how the Legislature is going to fund … core government services,” the chamber president said of declining state revenues from the energy industry. “What concerns us — and I’m talking about the business community and employers in Oklahoma City — is the struggle that they have in finding talent, in finding workforce. And the school system provides the workforce. It provides the fundamental building block to enter the career market.”

When the Oklahoma Legislature convenes Feb. 2, challenges await it, both from a funding mindset and a policy perspective.

In addition, Williams added, the issue of Medicaid expansion — or an Oklahoma-created alternative thereof — also remains unclear, even as more Republican-controlled states pursue the topic. Oklahoma Policy Institute estimates Medicaid expansion would create upwards of 12,000 jobs over 10 years in Oklahoma, jobs that other states are adding while Oklahoma is not.

Williams, who also has worked at chambers of commerce in Texas, Arizona and Ohio, said these state policy conundrums can be viewed similarly to the federal question of how to fix the struggling Highway Trust Fund and other unaddressed infrastructure needs.

“Unfortunately, it hasn’t been an economic discussion,” Williams said specifically of Medicaid expansion, which could cover about 130,000 lower-income Oklahomans who have limited health care access. “It’s been a political discussion.”

Print headline: $54 question, The employment and budget outlook for Oklahoma is positive, despite low oil prices.