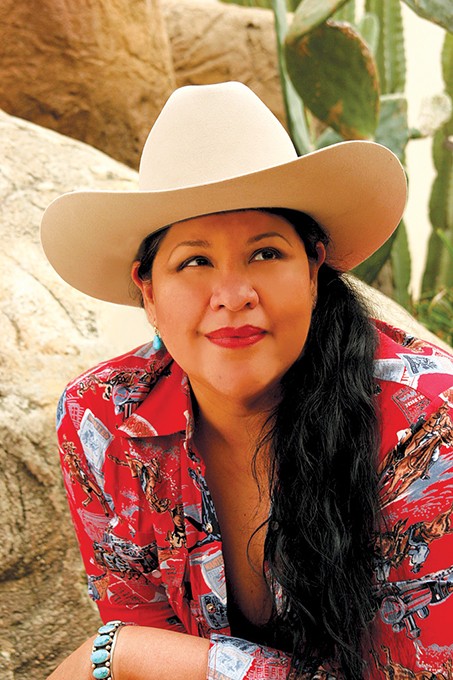 A critically acclaimed work of cinema verité, The Exiles, spends a single night with a group of young Native Americans who’ve moved from reservations to downtown Los Angeles after the Indian Relocation Act of 1956. New York Magazine called it “Enthralling and breathtakingly gorgeous!” Playwright Arigon Starr has a few problems with it.

“It was a beautifully shot film,” Starr said, “but the stories that they had in there were the usual Native American tropes of the broken family, the alcoholism, the tragedy, you know, ‘Lo the poor Indian.’ And I said to myself after seeing it, it kind of made me angry; I said, ‘That’s not what I heard from my family.’ I still have family members that moved from Oklahoma to Los Angeles in the 1950s and stayed there, and they had wonderful lives. They had families and children, and I thought, ‘They never tell that story. That’s the story I want.’”

Her desire to see that side of Native American life led her to write the comedy Round Dance, set in Los Angeles in 1956. It was performed as one of the staged readings at last year’s Native American New Play Festival. This year, Round Dance will be fully staged as the festival’s feature production beginning Thursday at Civic Center Music Hall, 201 N. Walker Ave.

Festival coordinator Maya Torralba said the play was selected for a full production in part because of the audience feedback to the staged reading.

“It was really popular,” Torralba said, “something fresh and new.”

In her time with the festival as both an artist and an administrator, Torralba said Round Dance is the first comedy she recalls.

Starr, a member of the Kickapoo Tribe of Oklahoma and a Los Angeles-based singer/songwriter, comic-book creator and playwright, said she likes writing comedies because laughter has always been an important part of her life.

“That’s another side of Native Americans that people don’t really get to see very often,” Starr said. “The way I was raised and the people that I knew growing up, we loved to laugh, and that was something that my grandparents shared with me and my mom and dad, just everybody I know. It’s like, gosh, when we all get together, we’re just hootin’ and hollerin’.”

Round Dance chronicles the meet-cute between Rudy Kernel (Wilson Daingkau), a scarred veteran and gas station manager relocated from rural Oklahoma, and Ada Snail (Starr), a Cherokee nurse, in a bar in Los Angeles in June of 1956, the night after Elvis Presley’s famous appearance on The Milton Berle Show. Starr said she thinks it’s important to tell upbeat stories about Native Americans in more contemporary settings.

“Yes, there are horrendous things that have happened to our people all over the country and they shouldn’t be forgotten,” Starr said. “But on the other hand, if we stay in that place, we’re downtrodden, brokenhearted, defeated, disappeared, vanished people, and that’s certainly not the case. So that’s why with the work that I do with my theater pieces, with the music that I create, with the comic books that I do, it’s all positive stuff that we’re still living now, and we’re not like that famous sculpture the ‘End of the Trail.’ Because that’s what a lot of people say, ‘Oh, they’re all dead and vanished,’ and it’s like ‘No, no, no; we’re still here.’”

Telling the story as a play gives it extra life, she said.

“What’s really interesting about doing theater is that it’s live, it’s immediate, and because of the space that we’re in, it’s really intimate,” Starr said. “You almost in this play feel like you’re onstage with the actors, and you’re in the action. I love it.”

The only issue with the live performance, Starr added, is that non-Native audience members are sometimes confused about how to respond to a comedy in the context of the Native American New Play Festival.

“When people come to see the show, let them know that it’s OK to laugh at the Indians,” Starr said. “You really have to give permission to the audience to laugh, and sometimes I’ll actually have a family member come in and I’ll tell them, ‘You just laugh as hard as you can. Get them started. ’Cause they’re a little afraid to laugh at us.’”

In addition to six performances of Round Dance, the festival, now in its ninth year, features staged readings of Neechie-itas by Jo MacDonald, Little Brother of War by Bret Jones, River of Blood by Ed Bourgeois and The Bone Picker by Carolyn Dunn as well as a live musical performance by Terry Tsotigh, vendors selling jewelry and art, an informational booth organized by the Coalition to Stop Violence Against Native Women and a discussion panel featuring Starr. Tickets to Round Dance can be purchased online, but the discussion panel and the staged readings are free to attend. Like last year, the audience response to the staged readings will help determine which play is produced as next year’s feature.

Torralba said the festival has “become more Native American-organized” in recent years with a record number of actors auditioning this year after organizers reached out to theater departments in rural Oklahoman towns such as Anadarko. Getting young people involved in the theater is key to keeping traditions alive.

“We’re a people of storytellers,” Torralba said, “and Native drama has always been storytelling and origin stories or trickster stories, and with elders telling the stories and telling children about times past, and the children would learn from that. And that’s what we’re carrying on now in contemporary Native culture through the theater.”