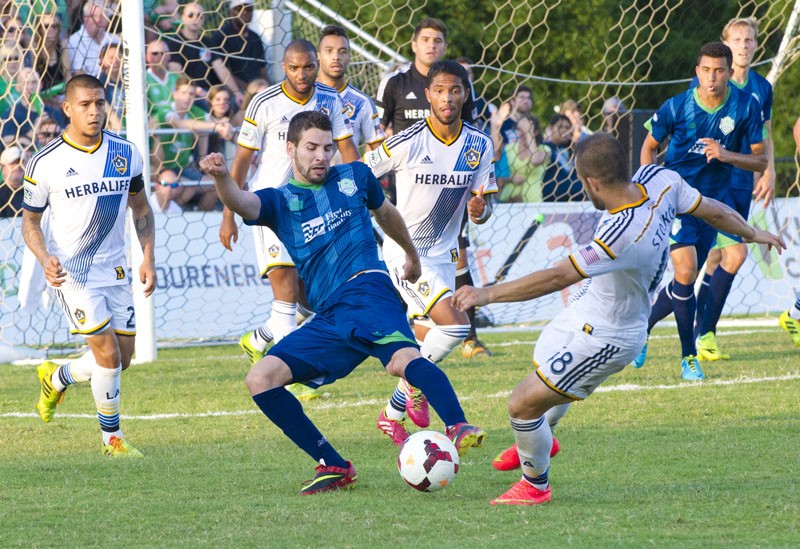 When the final whistle sounded on Oklahoma City Energy Football Club’s 1-0 win Saturday over Orange County Blues Football Club, coach Jimmy Nielsen turned to the crowd and pumped both his fists.The three points earned with the win pushed OKC (8-8-5) to sixth place in the USL Pro standings, well within reach of the playoffs, which invites the top eight teamsin the league.

“The guys are workingextremely hard for this here,” Neilsen said minutes after the game. “They find a way to win.”

Late goals are starting to become a habit for Energy FC, and the first- year head coach said recent results showed a step in the right direction for a team that is finding ways to do just enough to get the result.

“I think it was probably not our best game, but the guys had a good belief,” Nielsen said. “To win on what was not our best day, that’s a big step in the right direction.”

Following Saturday’s win, Energy FC enters the homestretch of the season with seven games remaining on the schedule. A top- half finish and playoff berth would be a statement for the first-year franchise, and a strong finish is within reach as only three of the last seven games are against teams above OKC in the standings.

David Leichty was the hero on Saturday as he scored the night’s only goal in the 88th minute to break the scoreless tie.

“The biggest thing is the three points,” Leichty said about the points OKC picked up in the standings following the win. “We are pushing for the playoffs.”

The win was also made possible by Samir Badr’s perfect game at goalkeeper, which was his second consecutive game with a clean sheet.

“I know that we can play a muchbetter game,” Badr said. “But [Orange County] didn’t have a good chance at a shot on goal.”

Like Nielson, Badr admitted the game could have been played better, but he saw a more unified squad in thesecond half when Energy FC found the late game- winner.

“[At halftime,] Jimmy said we have toplay more as a team, be more compact,” Badr said.“Although we didn’t play our best ... we came more together [in thesecond half].” OKC is back in actionSaturday at Sacramento, the league’s third-place team. However, Energy FC will bring confidence with them to California, not just because of this week’s win but because OKC is 2-0 against Sacramento Republic FootballClub so far this season.

What it will take to make playoffs

Two games against Sacramento and ArizonaUnited Soccer Club, and one game each against Orange County BluesFootball Club, Los AngelesGalaxy II and CharlestonBattery remains forEnergy FC. Only three of those games are at home,but OKC has a 5-4 record against the teams it will face.

With 29 points, OKC is four points ahead of the first team outside of the playoff line. A few more wins, along with a draw or two, could be plenty to push Energy FC into the postseason.

Oklahoma City has been a team that plays tighter at home, at least on the scoreboard. In the 11 home games this season, Energy FC has scored 11 goals, giving up nine. However, despite playing one less game on the road thanat home so far, the team has scored 18 road goals and given up 19.

OKC’s field is not as wide as others across the league, and less room around the ball might be partly to blame for the lower scoring output at home. With four of seven games remaining on the road, OKC will have a chance to continue its more open scoring style with a hope of locking down a playoff spot.

With seven goals this season, forward Kyle Greig leads the team in goals scored and is tied for seventh most in the league.

Team captain and midfielder Michael Thomas ranks fourth in the league for most minutes played, as he has logged 1,890 minutes of play this season, which is the most that can be played in 21 games.

The team leader in assists is Adda Djeziri with five, good enough for sixth in the league.

Playing its first season at Bishop McGuinness Catholic High School’s Pribil Stadium, Energy FC will nearly double its home capacity next year when it moves to Taft Stadium on May Avenue. Construction is underwayat Taft Stadium, and current season ticket holders will soon have a chance to secure seats at the new stadium, club officials said.