Fuze Buffet & Bar, 6512 Northwest Expressway, is far from Oklahoma City’s first buffet, nor will it be the last. We are a city of eaters, a people who shall not be controlled by so-called “portion sizes” or “urgent pleas from medical professionals who are concerned about your health, Greg.”

We live to eat and eat to live. That’s why Fuze was more or less inevitable. Eventually, someone would see that our boundless love of food and our rapacious thirst for adult beverages should be combined into one gut-busting juggernaut.

Upon entering Fuze, you will be greeted by a host who will take you and your party to a table. A server will come by to offer you drinks — alcoholic or non — and direct you to the buffet.

The first thing you will see is the salad bar. Note I did not say “your first stop” because you will not stop there. No one does.

“Does it get lonely over here?” I asked the woman behind the salad bar.

At a buffet lined with steak, stir-fry, tacos, seafood, sushi and gelato, the salad bar is tantamount to the garnish on your entree. You could eat it, of course, but it’s just there to look pretty before you get to the main course. 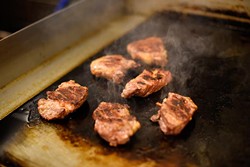 I am torn by my love for the Mongolian barbecue. On the one hand, it’s delightful. Grab a bowl and fill it with meats, vegetables, sauces, seasonings and what-have-you. Grab an egg while you’re at it. Take that flavorful uncooked melange to the counter and be prepared to wait a minute. Someone will toss it on the grill, scraping and flipping and chopping it up for you. Do you want it over rice or maybe as lo mein? You get it back in a giant bowl, which you can either take back to your seat or try to balance in your arms as you collect more tasty bits and bobs.

The Mongolian barbecue is wonderful, but it takes time, even without a line. And it’s quite filling, depending on what you choose, which is good and bad. Surely I’m not the only one who goes to a buffet thinking, “I’m going to eat everything.” It’s harder to eat everything else if you’re already full of one thing.

If you can resist the siren song of the Mongolian barbecue, then you will likely end up with the steaks. Grilled to a juicy perfection, the steak is best when it has spent the least amount of time sitting under the heating lamp. Do you want two? Three? Take them. Don’t be a jerk and take a whole side of beef while other people are waiting, but it’s a buffet. Get what you want. 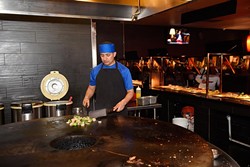 The tableau also features ribs, pork and turkey among other choices. Steak is the most popular, but I found the turkey, when freshly sliced, to be tender and juicy.

Cross the busy aisle and you’ll find a large section dedicated to sushi. While I’m an eternal fan of raw fish wrapped in rice, I am sad to report that Fuze’s sushi buffet leaves something to be desired: flavor. The rice is fine. The fish is fine. The sauce is fine. It’s all fine, but you can save space on your plate and in your tummy for even better-tasting fare.

Ditto for the burger bar. It’s not that it isn’t fun to build your own burger; it’s just that you can do that almost anywhere. That said, if you’ve ever thought, “What would a cheeseburger with mu shu chicken and taco meat taste like?” then Fuze is the perfect place for your mad culinary scientist dreams to see the light of day.

For the most variety, you will need to pay the highest price. Fuze has a larger selection of seafood, like crab cakes and crab legs and other, less-crabby items, available at night. Lunch on weekdays is $8.99. Dinner 4-9 p.m. weekdays and all day on the weekends is $12.99. Kids 2 years old and younger are free. Three-year-olds are $2.99, and it’s an additional 50 cents for each year until they’re 12.

And, believe me, your kids will want to go to Fuze. Even children that aren’t yours will befriend you in the hopes that you’ll take them. Because the dessert case is immense. Pies and cakes don’t stretch as far as the eye can see, but that’s OK. You can’t eat everything that’s there as it is; don’t get greedy. But also don’t forget to turn the corner, because that’s where the gelato and ice cream and fixings bar is located. 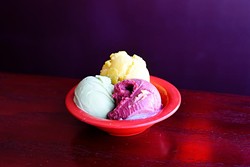 Did you know your stomach makes extra room for dessert? Japanese scientists actually proved it, as much as science can definitively prove anything. So even if you load up at Fuze like you’re about to move west on the Oregon Trail, you’ll still have room for a scoop of peanut butter gelato.

For the sheer depth and breadth of all-you-can-eat options under one roof, it’s absolutely worth a trip up Northwest Expressway to fill a plate or seven and see for yourself.

Print headline: Fuze-ion cuisine, With a world of foods under one roof, this local Las Vegas-style buffet doesn’t ask you to choose just one.

What works: When it’s fresh on the line, the steak is the best deal around.

Tip: Is the buffet out of something you want to try? Ask someone and they’ll refill it.