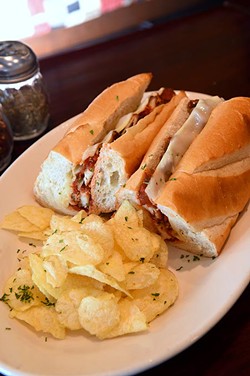 I’ve never seen a little boy happier than 40-something-year-old Rob Crissinger when you tell him you’re getting pizza.

Rob feels ways about pizza. Rob cares about pizza. If prisons stopped serving bread and water and started serving pizza and pizza, Rob would commit the most heinous crime imaginable in order to spend his life closer to it.

Sandro’s in Moore has a hometown feel about it, with a thin cattle chute through which diners are herded for ordering before being let out into a spacious dining room with tables and booths.

It’s a good place for by-the-slice dining, as it offers a display of pies waiting for a quick stint in the oven to crisp up before being delivered to your table.

Unfortunately, the slice of pepperoni pizza ($3) Rob and I shared, Lady and the Tramp-style, wasn’t terribly impressive. The sauce didn’t make much impact, and the pepperoni was just so-so.

If you want a big slice of New York thin crust with pepperoni, it’s just fine, but it won’t redefine pizza forever.

We found the stromboli ($5.99) much better; it wrapped a jumble of pepperoni, sausage and mushrooms with stringy, melted mozzarella inside a buttery, crisp crust. And the marinara, which seemed lost in the pepperoni slice, is wonderful.

Maybe it is a lack of grease or the contrast of the cold sauce with the steaming hot stromboli, but it all came together.

If you’re the type of gentleman or lady who prefers a calzone, those also are available with a creamy helping of ricotta cheese in their interior. I ain’t fancy, though. I just get a stromboli and go about my day.

And just because the pepperoni fell shy of expectations, do not let that sour you to the possibilities of Sandro’s pies. Ordering a whole pizza might be a better way to go, especially if you’re getting a quattro formaggio.

Crisp, thin crust was topped with ricotta and then mozzarella and was then studded with feta and Parmesan cheeses.

It is not for the lactose intolerant or any kind of intolerant people. Seriously, guys; grow up and learn to respect each other’s rights or you don’t get any of this incredibly rich, cheesy fare!

Rob, who is, at the very least, lactose-curious, said it was his favorite. Those are strong words from a man wearing a cool hat.

If you like your bread folded instead of flat, I will point you in the direction of the chicken parmigiana sub ($6.99).

It’s not gourmet, but it hits all the right buttons to make your stomach rumble and your mouth salivate.

The bread is slightly crisp outside, but inside, the mix of cheese and marinara fuses with the fried breast for an ooey-gooey, hot gut bomb of goodness.

For all those Normanites who are upset that I haven’t reviewed their Sandro’s, I promise you, it’s on my list.

But for those in the Moore area looking for a tasty Italian treat, this Sandro’s is filled with friendly staff, tasty food and enough room to hold a moderately successful Sunday school group.

And if you’re anything like Rob, you’re looking for someplace to pray to the pizza gods again soon.

Print headline: Heavenly slice, Sandro’s Pizza and Pasta in Moore offers everything from subs to stromboli.

What works: The quattro formaggio is a cheese-covered taste sensation.

What needs work: The pepperoni pizza, the foundation of all pizza, was just okay.

Tip: Rotating lunch specials are a good way to try everything.