With a background in financial consulting, Michael Halbert went from office to office with one rule: Don’t drink the company coffee unless desperate.

In an age where businesses have an increased focus on technological and ergonomic aspects of employee life, Halbert wonders why that hasn’t made its way to coffee, especially given the 83 percent of the adults in the United States who drink three cups of coffee a day, two of which are at work.

“What else in the office hasn’t gotten better in the last 50 years?” Halbert asked. “Most people aren’t drinking anything much different than Folgers [at work] like my granddad did.”

As an independent consultant, Halbert would do much of his work at Clarity Coffee at 431 W. Main St. downtown. During his visits, he struck up a friendship with Clarity’s owner Steve Willingham.

Often, the conversation between Willingham, a true coffee connoisseur, and Halbert, relying on his finance background, would delve into the obstacles of opening a small business. That was when Willingham and Halbert realized a partnership could be mutually beneficial.

KLLR Coffee reflects Halbert’s financial background and Willingham’s coffee expertise, which goes from coffee bean to the equipment itself. Willingham and Halbert brought in Hobbs Halbert, Michael’s son, as an equal partner and opened KLLR Coffee at its 401 NW 23rd St. location in front of Cheever’s Cafe in early August 2017.

In addition to offering seven varieties of coffee roasted in-house to small businesses, coffee shops and customers, KLLR Coffee sells everything else needed for a local coffee shop: cups, eco-friendly stirrers, syrup and alternative milk options, the latter of which can be expensive for shops to buy on an individual basis.

“One of the biggest challenges for starting a small business is finding the right equipment,” Willingham said. “I had 10 years of experience with coffee before I opened Clarity, but other people aren’t so lucky. All of the little problems I had during startup we knew we could solve for other people.” 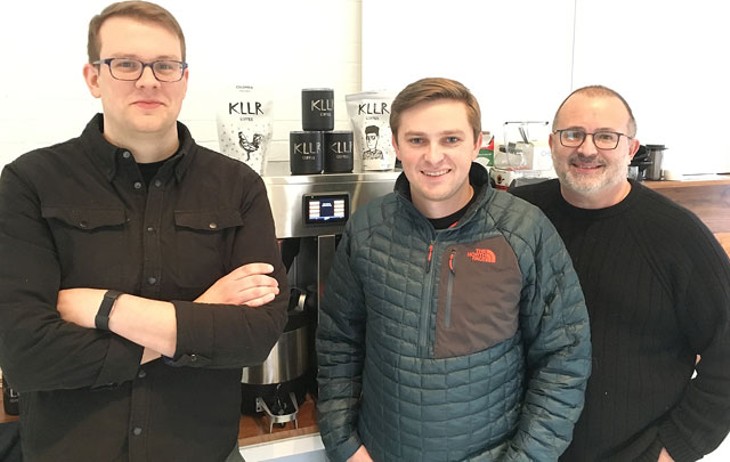 KLLR Coffee’s distinct silver-and-black packaging was designed by local artist Koon Vega. Its Colombian coffee features a rooster, an ever-present sign of life in the South American country. The Guatemalan variety features a quetzal, the country’s national bird. Each of the Ethiopian varieties features humans looking at each other when the bags are stood side by side. An espresso blend features a squirrel with deer antlers, and a rotating small batch variety displays a UFO because it will change every few weeks.

“I like to think of it as our Arnold Palmer style,” Willingham said with a smile.

Willingham said his favorite part of the job is contacting green coffee importers who harvest the bean from a fruit into a dried seed. The quality assurance process culminates by grinding and drinking the roasted product grounds and all.

“Steve has forgotten more about coffee than I’ll ever know,” Michael Halbert said. “There hasn’t been a resource [like Willingham] on this side of the state.”

Willingham worked with its new neighboring bar, Ponyboy, 423 NW 23rd St., to get its coffee-making equipment at a wholesale price and trained two baristas for the bar and coffee shop concept by 84 Hospitality Group.

“Our quality is reflected in the award-winning clients that have brought us in,” Michael Halbert said. “We only like working with small business people. We don’t like big corporate politics.”

In 2018, Hobbs Halbert said KLLR Coffee wants to expand its offerings to offices.

“There is a huge gap in the office coffee space. There is First Choice [Coffee Services] (Oklahoma City-based) and Henderson [Coffee] (in Muskogee), but other than that, employees are bringing in what they get at retail,” he said.

Halbert said KLLR Coffee’s consulting side even recently entered into an agreement to take over full bookkeeping aspects for a client.

“We want the shop owner to focus on delivering the coffee and take the burden of the back end off of them,” Halbert said.