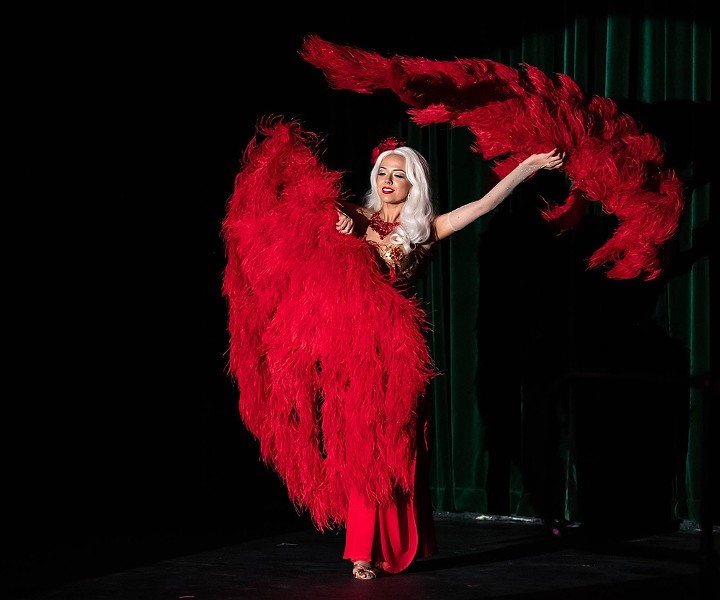 Diana Bittle Adèle Wolf Productions has been producing annual Valentines and New Years Eve burlesque and variety performances for over a decade in Oklahoma City.

Performances labeled burlesque or variety can bring to mind numerous things, especially in a journey through the eras.

From the sparkling clothes to the skill of each carefully placed move to the suspense as audiences’ witness feats never before seen in person, Adèle Wolf Productions’ 11th Annual New Year’s Eve Bash and Valentine’s Affair performances exceed expectations.

“My vision has always been based on the old-school burlesque and variety shows, where the definition of burlesque was very much open to like vaudeville performers — comedians, circus acts — like it was kind of all encompassing,” Wolf said.

With a little something spicy kept in the mix.

“A lot of shows, more modern shows, put more of an emphasis on the striptease. And while we definitely still include that and celebrate that as part of our show, it’s one element of it,” she said.

The historically-inspired approach that Wolf takes to burlesque, incorporating aspects of vaudeville and variety in her shows, meshes with this year’s theme for the New Years Eve Bash: “eras of entertainment.”

The event’s ticket page encourages attendees to come dressed in a costume inspired by their favorite era.

Scheduled for 10 p.m. Dec. 31, Wolf said the New Year’s Eve Bash is planned to include counting down to the New Year, although the very nature of a live performance may lead the show to run past midnight.

“I’ll be performing two acts,” Wolf said. “And one of them will be my giant champagne coup and that’s always something people get really excited about.”

In addition to the champagne tradition, Wolf has a surprise in store.

The eras theme poses unique challenges for the performers.

“The best challenge has been to tailor the performances to a specific decade, were it costume or music choice,” performer and acrobat Noëmi Fallu said. “It has been very exciting to get to explore some musicality that is quite different from the usual requests.”

“The first act is Cyr Wheel. Think big wheel, metal wheel, in which I spin and twirl around the stage,” she said. “The second one is corde lisse, a single vertical rope on which I showcase drops and flexibility.”

Meanwhile, Adèle Wolf’s 11th Annual Valentine’s Affair is scheduled for Feb. 11 and is still in planning.

“Sometimes I think people may be hesitant to celebrate Valentine’s or go to Valentine’s-themed events, because they’re so centered on like, positive romantic love, you know?” Wolf said. “But we really try to do something for everybody to feel included whether you just went through a bad breakup or you’re in a super happy relationship or celebrating an anniversary.”

Deonna Marie is one of Adèle Wolf Productions’ resident artists and will be performing in both the New Year’s Eve Bash and the Valentines Affair.

“This year I’ll be performing a cover of “River” by Bishop Briggs at our New Year’s Eve show,” she said. “I don’t want to spoil the surprise but I plan on performing a classical/operatic selection for our Valentines show. Although I’ve performed several genres over the years I haven’t sang classically yet, I’m super excited.”

She first became a performer for Adèle Wolf Productions almost by accident.

“I was on tour with a friend in a show and she was scheduled to perform for one of Adèle’s productions,” Deonna Marie said. “She got sick and called and asked if I could fill in for her and I’ve been performing with AWP [Adèle Wolf Productions] ever since.”

She said one of her biggest challenges when preparing for these shows is selecting the songs she’ll perform, and spoke highly of her fellow performers.

“We are an eclectic group of artists that express themselves freely in some ways people have never experienced before,” she said. “I believe this is a new way to view art. An opportunity to expand your mind and for one to feel empowered in the beautiful skin you’re in. This production features an array of talents and acts performed by people of all styles, sizes, genres and ethnicities.”

“You’re going to see things that you’ve never seen before and probably didn’t think was possible. That’s been my experience with the shows,” they said.

Noor first became involved with the shows as a stage hand and auditioned the first chance they had and are especially excited about a set dressing for the New Year’s Eve Bash.

“I’m very excited to show the things I’m building and crafting with my hands and this little story I want to tell,” Noor said. “I’ll give a hint: it’s about a metamorphosis. And that’s all I can say for right now.”

Performances will be held at The Auditorium at The Douglass, on Dec. 31 and Feb. 11 respectively.

“It’s been a joy getting to know someone and getting to know a little bit about their performers and their acts and how they think so it’s just been a great time to grow together, I think, and I’ve just really appreciated that,” she said.

The events are open to those 18 and older.